We Are Football Review: We are all a little bit coaches

How many times have you wanted to be the coaches of your favorite team? With We Are Football you can do it, kick-off for the review

FIFA Manager, Football Manager and retrogaming lovers will certainly not be able to forget Ultimate Soccer Manager or On The Ball. These are just some of the main managerial football games which, in addition to an endless fantasy in the titles, have therefore made us all understand how “easy” it is to be a coach from home while watching the game on television.

Obviously in a manner of speaking given that, as the We Are Football review, dealing with the world of football is never as simple as it might seem. Just think of all the things you have to pay attention to when training a team, even a team if you want, and you also have to face the matches and the transfer market. A really impressive amount of stress that we will never wish even to our worst enemy, but no more chatter. Prepare your good suit, the best speeches, the angry face and let's go through the changing rooms and the offices of the football clubs.

You know those people who, for a lifetime, seem destined to do only one thing ever? Directors who maybe blow up everything that moves, a bit like Michael Bay, but even programmers who seem to prefer only one type of game. This is therefore the case with Gerald Koehler, football lever of '69 in this case, German programmer and game designer who, from a very young age, had shown a particular predilection for the game of football and obviously for programming.


In fact, he had even programmed video games on Commodore 64 for pastime and then ended up turning it into a job carrying a title like Kicker on Atari ST. Later we will find him among those who have adapted the series Kick Off in German and among the proponents of games such as the three chapters of INITIATIVE: The football manager, a ballistic parenthesis with Ballerburg, a rundown of Football Manager and the title we will cover today. Game that was developed within his company, Winning Streak Games, founded in 2018 together with the partners Rolf Langenberg e Dirk Winter. In any case, don't worry because, despite what you might think, the game we are going to analyze is completely in Spanish. 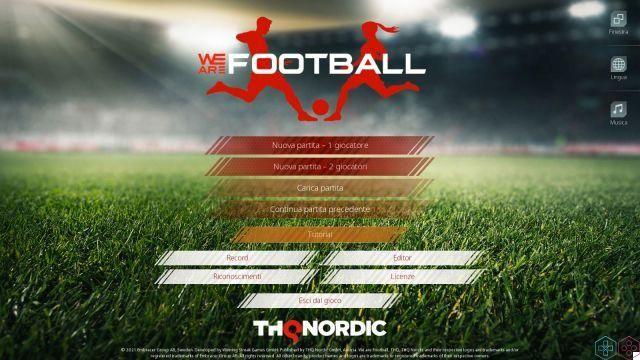 Once we launched the game for review, we quickly figured out how, for We Are Football, the choices we make will prove decisive for the continuation of our football adventure. If we wanted to, we could almost compare them to a role-playing game when, with a roll of the dice, we try to match bonus and malus to our newly created characters. Here we could then choose the type of team, Spanish or foreign, select football masculine or feminine, and also respond to some brief existential questions about football and how we understand it. For example, what matters most in a team, if we play other sports, what is our type of ideal scheme, what work we do and other such questions.


Then it will be the same system that immediately catapulted us into the game by choosing, according to our answers, the team that best suits us and our schemes. We can immediately see how practically every team, both Spanish and foreign from Serie A down, is present in the database. Unfortunately the same cannot be said for the soccer players which, in addition to having random names, very often also have almost the same faces. In any case, we can remedy all this with a little buying and selling on the transfer market days or take advantage of theeditor present in the game to create our new favorite team. 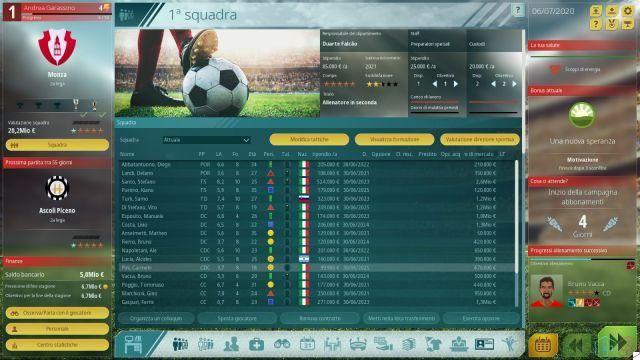 The action shifts - Review: We Are Football

We advise you to give immediately a nice in-depth look at the tutorial because, given the rhythms, the game will literally "shoot" you in the face a whole series of tips (with an anthropomorphic whistle stile Clippy), settings, data, appointments to be included in the agenda, contracts, requests from other teams and even unexpected events as required by the "secular tradition" of Monopoly.

We will therefore have one visual in the form of an agenda that we will have to fill with the suggested commitments. For example, it will be necessary to visit the local fan club, talk to the club about a possible increase, hire another member of the coaching staff, but above all prepare for the transfer market and matches.


As for the transfer market, there are two ways. Either you do some classic player trading or you expect the other teams to make offers for one of our players. Moments when, if your reputation is good, you can also raise the price a little. This is also bargaining! As for the matchesInstead, the most important thing of all is training. So it will be necessary to choose what and how much to do to the players and then check if it is necessary to further strengthen a certain player over another. 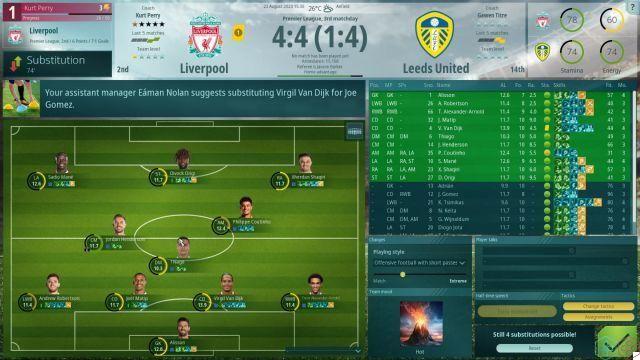 We take the field - Review: We Are Football

If the tension before taking the field it is palpable, then, here you can decide for yourself how to manage it. In addition to choosing the best formation with your players and setting the style of play, from the most defensive possible to the aggressive and less tactical, you can also give a little pep talk to the team. This may or may not benefit their morale so choose what to say in the appropriate menu.

Do you want to be slightly more sure of your victory on the pitch? Well, in this case you could promise a little extra bonus to the players or be a little more "unfair" and not fix, for example, half of the opponents' field when you play at home. Then remember to always keep an eye on the parameters of your players which vary depending on the position on the pitch. To take a trivial example, a player may be good in goal, but fail to be effective in attack and so on.

In any case, once all these tactical decisions have been made, it will be time for the kick-off of the match where 2D animations will show us the most salient actions. Therefore game phases such as passes, shots on goal, goals, fouls and even the yellow or red cards of the referee. Depending on our results obtained in the field we can therefore earn points that will allow us to train our players more effectively, obtain different skills, but above all make us a reputation that will lead us to new contracts and also a more than decent sum of hard cash! 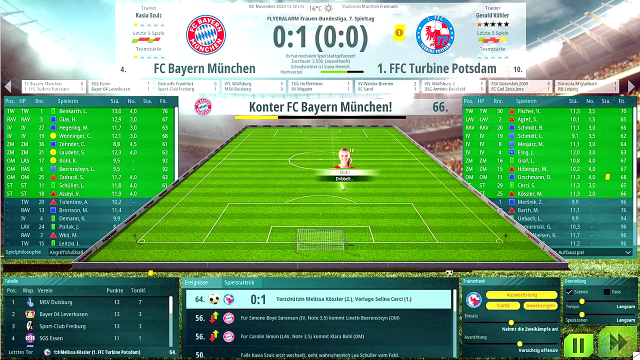 And we have reached the ninetieth

Final whistle, everyone in the locker room, and also for the review of We Are Football it's time to rest for a moment and draw the last sums after a lot of effort. Unfortunately, the first thing that leaves us a bit stunned is to discover that, despite the title being of the 2021 graphics is not really anything special and even the faces of the players themselves seem more like a mobile title. Despite the rhythm can then be, from the first minutes of play, rather hectic, after less than an hour of play and the tutorial one can already begin to reason in a rather autonomous way. Of course, as in all managerial teams, our intervention on the match is relatively minimal, but there too something more could be done.

If there is no noteworthy action we will only see an empty field with the camera moving from side to side, a “director's choice” that also makes you a little sad. Another rather questionable choice are the names and faces of the players! Indeed, in addition to being completely invented, it is not possible to find a counterpart in the reality also because, after a while, theface editor shows his side. Fortunately, we can choose how to make our team and thus orient ourselves a little better.

In conclusion we can say that, maybe this game will not live up to those already mentioned at the beginning, but to try it is just fine. At least you will be able to realize how, coaching and managing a football team is not as easy as it may seem at first glance! In any case, remember that if you like recover sports games at the best price ever, click here, while, to stay always updated on the world of video games yesterday and today, we are waiting for you here on techigames dear coaches!

6 recensione we are football

add a comment of We Are Football Review: We are all a little bit coaches