Waking review: wandering and getting lost in the unconscious

A gloomy and agonizing sleep plunged us into darkness. In this review of the new indie Waking we will find out if we have managed to see the light again or have definitively perished

Is it possible to transform a person's intimacy into playful content? This seems to have been the question that the developer asked himself Jason Room when, five years ago, he began sketching the concept of Waking. The game made a first cameo atE3 of 2017 with the working title "Coma". Oda then managed to engage tinyBuild GAMES (Hello Neighbor, Party Hard) as a publisher and baptized the new creature "Waking". The latter will see the light on June 18 on PC and Xbox One.

Oda took care of the concept of the game, programmed it himself from start to finish and, to top it off, created the polygonal models. In short, he put his soul into the project and the latter is made in his image and likeness. In the course of his human story the developer found himself in a position to struggle between life and death. A condition that unites it to the protagonist of Waking, agonizing on a hospital bed.

It follows, inevitably, that this indie will vibrate the strings of theintimacy of the player. Or at least that's the assumption. Get ready to delve into the farthest reaches of your mind in this review of Waking.

Give up all hope, you who play

Jason Oda defined Waking "the most personal game ever created". This does not mean that you will play some sort of interactive biography of Oda's life, but that, on the contrary, you will be the protagonists with your personal experience. How is this possible? It is soon said. On certain occasions, the game will ask you some personal questions regarding your past. Based on your answers you will have access to certain skills and items.

Oda has even ventured to create a new genre, at least in words. Trying to designate a specific category for his creature, in fact, the game-designer presented Waking as "Emotional Action-Adventure". This curious trinomial alludes to the fact that in the game you will be able explore varies location, collide with singular entities and, drum roll, do introspection. Yes, you got it right. During the gameplay, you will be kindly asked to close your eyes (and you better do it a lot, the only thing you would see would be a black screen beautiful and good) while a voice whispers beautiful and less beautiful things about your past.

This substantial course will be served with a side dish of prohibitive difficulty e almost satisfaction null. But let's proceed in order and let's dissect the various components in this review of Waking. 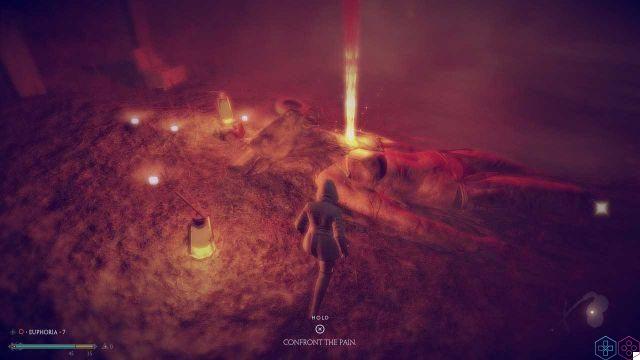 On display, in the game start screen there is a person on a hospital bed. Impossible to tell if it is a man, a woman or an elderly person since the figure is completely wrapped in bandages. The person has a tube in their mouth and is attached to various machines. Well, that will be your avatar for the rest of the game. The character, I think you vaguely guessed, not doing well.

Your job is to access the character's mind and try to help him win their fight for life. The latter expression, although abused, is often a euphemism to refer to someone in a state of coma. Waking essentially turns this metaphorical and figurative struggle into a literal struggle. In fact, you will have to guide your avatar in the meanders of his unconscious, meanders densely crowded with fearsome creatures and entities.

At the beginning of the story you will make the (unpleasant) acquaintance of Somnus. We don't know exactly who this character is (you will soon learn to understand that in Waking everything is vague and indefinite) but it is, in all probability, a lord of the underworld. Somnus is the villain of the game and wants at all costs to include your avatar in his anime collection. Therefore he will hurl all sorts of monstrosities at you.

However, you can count on the help of another mysterious character, a female angel with very long wings that will be at your bedside to provide you new skills. In the course of the adventure you will find out what has reduced your avatar to its current state. So far we have not omitted relevant details: what you have just read constitutes the very poor narrative component of Waking.

It should also be added that the opportunities to discover the various ideas relating to the plot are very rare. You will then find yourself playing entire and interminable hours wondering who the so-and-so is and what is happening. A minimum of insight into the characters would certainly not have spoiled. 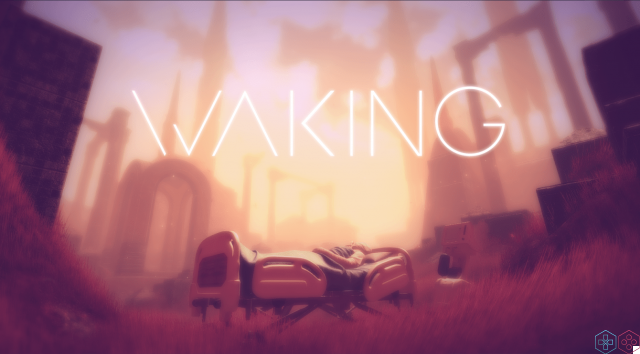 A journey into the unconscious or to the factory? - Waking review

It has been said that in Waking you will clash with yours ghosts of the past and the most unspeakable monstrosities of your unconscious. Well, know that such transcendental concepts will be personified by mechanical satellites in the shape of flowers, metal rockets and laser-shooting columns. To overcome these terrible adversities, Oda has devised a system based on a very slow learning curve.

Basically your avatar comes with telekinesis. Which means it can take the control of various objects game and hurl them like bullets at enemies. It is not clear why they should be everywhere in the unconscious tables, chairs, tires and hydraulic pipes; the fact is that these will be our best allies. In addition, the character will also be able to strike hands. Be careful, however, to sing victory so soon, hand-to-hand combat is the real nightmare of the game.

Before you can give some simple slap you must first hit the opponent with an object thrown through telekinesis. At this point the enemy will release some small pyramids (metaphorically called "Feelings"). Once you get it uploaded the Feelings by holding down a key on the pad, you can finally pull it slap much desired. But only a little at a time. To pull others you will in fact be forced to repeat the process from the beginning. It is a dynamic frustrating and cumbersome up to the unbelievable that it will make the fights more unnatural of a day in the factory, of the famous "Modern times”Di Charlie Chaplin.

The inevitable bossfight they do not raise the fortunes of Waking, rather. They will stand in front of you omoni equipped with animal headdresses. At their disposal, these characters have attack patterns of a variety comparable to that of mobile games of the early XNUMXs. In other words, the bosses they will chase you around the map at a very slow pace letting go every now and then a some lazy backhand. 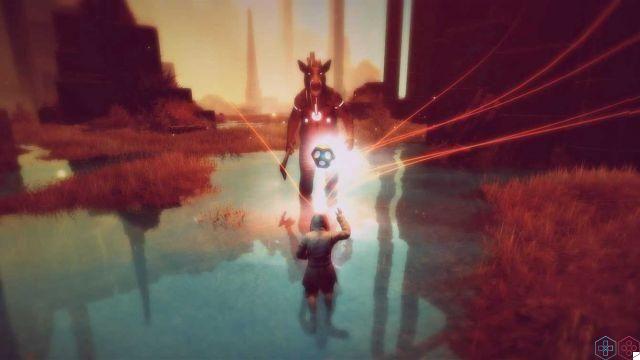 Let's all do an examination of conscience - Waking Review

Once you have defeated the various bosses you will be rewarded from the angel already mentioned. Precisely on these occasions they will be triggered the famous phases of introspection with closed eyes. A voice will invite you to dwell (at length) on happier memories of your life. The place of birth, a pet, an old love. Once you name these memories you can see them materialize in your inventory in the form of skill ed item.

You will have the possibility, for example, to summon your own old friend. Your friend will then be represented by a polygonal model who will run around the map with you and will launch into various attacks on demand. It's about a nice and interesting mechanics. More often than not, however, this will all come down to baptize spheres to throw against enemies and special rockets with the names of the places you are most fond of leaving you a generous amount of bitterness in the mouth.

La monotonous flatness of the gameplay, moreover, will strike down like a cruel ax on the atmosphere created by the meditative phases. When the initial magic of playing a new title has worn off, in all likelihood, you will be seized by an irrepressible instinct to skip the interminable and soporific whispers on black screen. 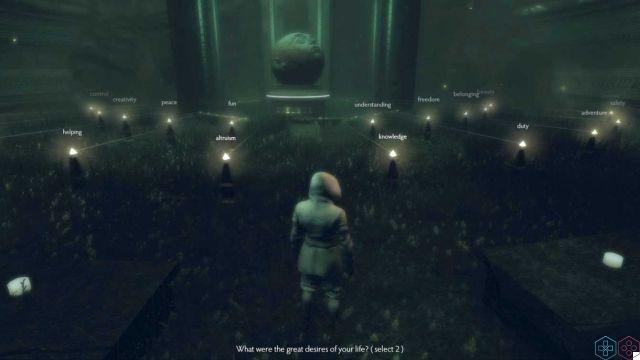 As you imagine l'unconscious? Know that what is represented in Waking is an endless expanse of flat environments wrapped in a gloomy haze. The repetitiveness of locations and characters is almost nauseante. Wherever you turn you will see nothing but peeling hallways, grassy lawns and deserted cathedral rooms. This is clear from the fact that many of the explorable areas have been proposed again several times with different color filters to give an illusion of variety.

Even the look of the various enemies does not catch the eye and that of your character is limited to a bathrobe without a face. Overall, Oda still managed to give an air dark e funereal to the game world making good use of fog e lights. Ultimately, textures aren't bad. Positive performance note: the framerate it never shows particular drops and the pc does not heat up.

The audio component consists of a shrunken variety of songs, rarely able to excite. Bossfights take place in time to unnerving electronic bases worthy of the early XNUMXs. Good dubbing. 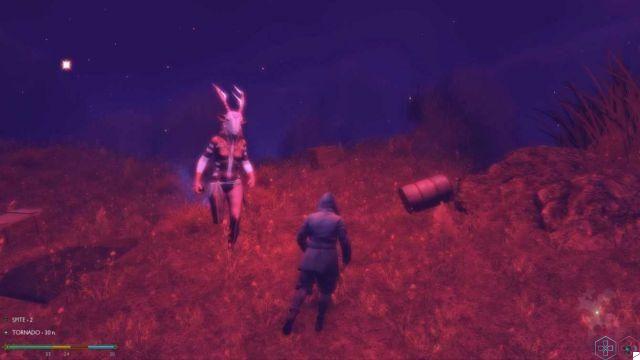 But did we finally wake up from the nightmare?

We can say it: the strange mixture of the experiment proposed by Jason Oda in the end revealed itself a lethal potion he has killed our urge to play this title. The game starts from ambitious and fascinating premises: to combine playfulness and psychological investigation. However, everything is lost in the course of construction. Neither the gameplay nor the introspective phases convince. In any case, credit should be given to a developer who was able to create, almost, alone an indie title suitable for those interested in something, from all points of view, very different from usual.

Thank you for reading this very long Waking review. We invite you to stay tuned with us at techigames for updates from the world of gaming and beyond.

add a comment of Waking review: wandering and getting lost in the unconscious