With the hard rhythm of metal, Valfaris tries to assert himself in the world of 2D platform action, find out if he succeeded with our review

Born from Steel Mantis, Valfaris is the successor of Slain: Back From Hell, and takes us to an equally "infernal" world. In a pixel art setting, the developers gave free rein to their vision, creating a brutal and grotesque scenario. Following the metal rhythm of the soundtrack, the player will find himself in cramped and decidedly unhygienic environments, fighting adrift in deep space with different creatures. However, all this will be possible thanks to the various white and firearms, which Valfaris will be generous in giving us.

Without focusing too much on brilliant dialogue lines or creating an interesting storyline, Valfaris directly catapults the player into the action. Taking advantage of the soundtrack and pixel art, the game will do everything to give us a feeling that is not often reported in the right way. We have many other things to say about Valfaris, let's continue with the review.

As already mentioned, the rhythm of Valfaris is dictated by a particularly catchy metal soundtrack that looks good on the gameplay, but it is not always true. Although there is a great variety of music, despite the theme, what is out of place is the logic of the game. The choice of gameplay exists, even with the mere presence of sidearms or firearms, but the point is: when should you use what?

Sided weapons are more powerful, even if they expose you more to damage. The firearms are divided into "light" and "heavy", with obvious differences. Heavy weapons, however, are handled according to the whims of a bar to be filled with the sword, or from other sources of energy. This leads them to be balanced, and still pushes the player to prefer sidearms, according to logic.


Problem is, Valfaris isn't Doom 2016, and he didn't take lessons from Bloodborne either. It's closer to the old Dooms indeed. The damage inflicted by the enemies is so huge, often and willingly, that it disfavors the use of swords. In fact, there is rarely real satisfaction in the use of sidearms, which are preferable only against bosses to be killed quickly. The rest of the gameplay revolves around the small blaster (and the numerous variants) that has no cost, and the shield function, which allows the famous "parry". With this shield, which in any case consumes energy, using the right timing it is possible to send both physical and laser shots back to the sender. 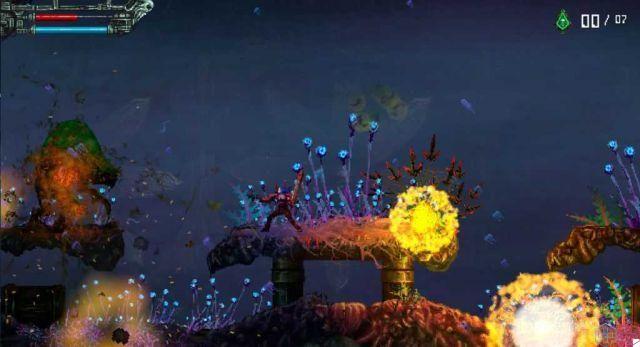 This allows the gameplay to get a more technical form, which completely contradicts both the cover and the soundtrack. You are not driven to be aggressive, on the contrary, aggression is paradoxically punished with zero rewards and more risk. However, the poor maneuverability of blasters, when it comes to aiming, is in itself an additional impediment, as it interfaces with movement commands.

The somewhat stiff controls also prevent smooth gameplay that can withstand the player's expectation, losing comparison with other action platformers such as Hollow Knight. Last little note: the armor. Immediately it appears more an “anachronistic tinsel - cit” rather than a futuristic protection. Greater flexibility in its use from the first areas would have positively upset the gameplay.

A universe of monsters - Review Valfaris

The variety of enemies is interesting and commendable, especially for the way they work. Different in shapes and colors, although often with obvious references to insects, mobs are not a particularly commendable challenge. This almost exclusively for the lack of effective functional balance. For example, it gives some of them (the flying fish) the ability to move in all directions at a fast speed and take off a quarter of their HP with just one touch. This would not have been a huge problem, if only they had not been included in sections of the game that are already particularly onerous to deal with.


The mobs could be made more complex, but at the same time less frustrating due to their imbalances. This is certainly not the factor that undermines the general enjoyment of Valfaris, but we cannot ignore it in the review. That feature is most noticeable because the spawning of creatures tends to fill the view, turning the action into chaotic for no reason whatsoever. 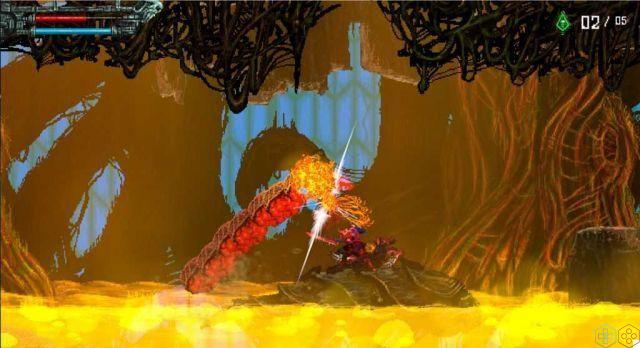 In a platformer, not being able to see where you're trying to land can be really annoying. I repeat, annoying, not difficult. And this does not create satisfaction in the player once an area has been crossed. Such areas are also extremely linear, with a few crossroads with no background to participate in small challenges. So there's no getting excited about exploration either. However, the simplicity of the map pushes the player to move forward, making the gameplay intuitive and in many parts even fun.

The fun is also aided by the way that universe is represented. The pixel art with acid and strong colors manages to give even more life to the backgrounds of the highly detailed scenarios. The level of healing is really high and it is even nice to be able to observe the lower part of the creatures, especially humanoids, run for a few inches before crashing to the ground. But Valfaris does not stop there, because it also shows us a series of bosses and mini bosses who, despite a truly disarming and sometimes stupid initial simplicity, have a lot to say. Indeed, scrolling through the various maps, we will have the opportunity to face enemies with a pleasant design and, at the same time, with a moveset capable of entertaining. With a little patience, the challenge will not fail. 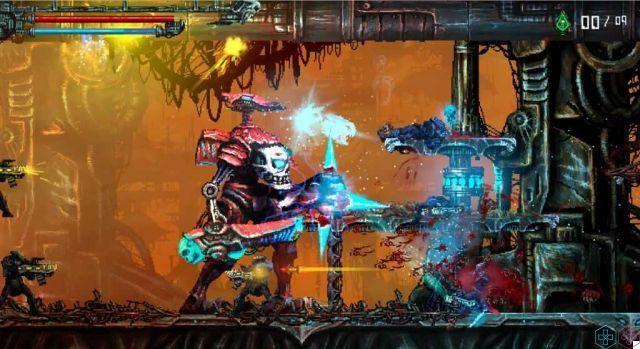 When the too much crashes - Review Valfaris

In Valfaris, of course, it could be said that there is no stinginess. The developers have been very generous in offering players a lot of weapons that are quite varied in functioning. Blasters and heavy firearms have different versions, but variety does not always manage to add sparkle to the gameplay. In fact, although some weapons bring real benefits in different sections of the game, they are too numerous and too attached to each other. The player does not have the time to learn how to use, or even simply try, the weapon he has just found. Especially in late game, which leads us to have personal preferences.

This, plus the fact that some weapons are really too similar. A flamethrower and a lightning bolt that, in fact, throws lightning may seem different, but in gameplay they are not so much. Eventually, you are allowed to create an elemental trail with your weapon, which does a lot of damage. The problem is: was it really needed? No. So Obtaining a new weapon isn't even seen as a grand prize for a colossal feat, just another page in your inventory. Not really the best way to thrill and reward the player. 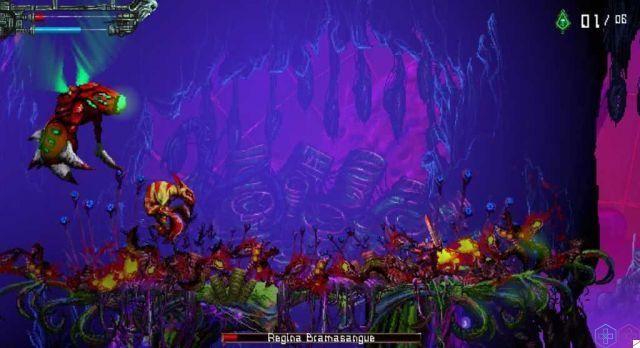 Ultimately, Valfaris is not a perfect game. While it features a lot of fun mechanics and has a great passion for video games (and metal) at its core, it fails to frame what a gamer truly wants. The artistic side is striking and is absolutely to be commended. That said, the impression still remains in a positive range, deceived only by an image that does not belong to this title.
For lovers of ignorant 2D action, it is definitely a stop not to be missed.

7 Good, but not very good

add a comment of Valfaris review, a deceptive riff