Uncharted Review: The Lost Legacy, a great step back

Uncharted: The Lost Legacy was a huge gamble. The historical characters of the saga have been given a stroke of the towel, who have accompanied us for 4 main adventures and some spin-offs. The much loved Natan Drake has retired and with him the beautiful journalist

The developers and writers had to roll up their sleeves. Setting aside the characters who have accompanied us for many years must not have been an easy task. Adventurers of the caliber of Sully are difficult to replace, but I can tell you right away that the choice of protagonists, antagonists and supporting characters was prudent and priceless. 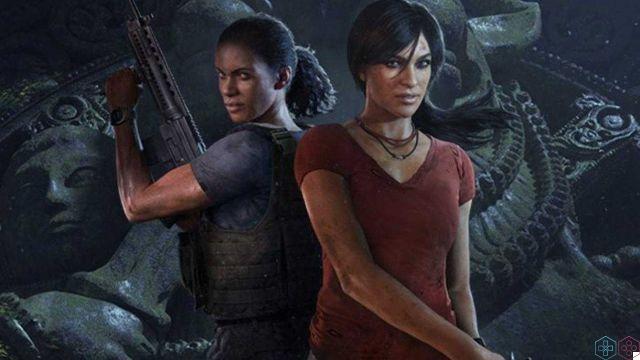 The strange couple. Chloe and Nadine are old Uncharted acquaintances, but I wouldn't have expected such charismatic characters. Even able to support a story worthy of the main chapters of the saga

The story of Uncharted: The Lost Legacy, will take us on a cultural journey to discover the most intrinsic part of the Hindu religion. A journey among gods with elephant heads, epic challenges and fantastic stories that will be the background of a direct and consistent plot.

The thing that immediately catches the eye of the players, lovers of the saga, is the strange choice of the main characters. On one side of the screen we find Chloe. Co-star of the second chapter of Uncharted. Character very similar to Natan Drake, charismatic, strong, witty but fragile and very emotional at the same time. Chloe was a slightly excellent choice to revive a lived and tired saga that has been able to excite, entertain and sadden millions of gamers.

Obviously, in order to support such a charismatic character, he could not be accompanied by "a rag doll". That's why we see the appearance of Nadine, in the good team.


Nadine is a former rebel at the head of one of the largest mercenary organizations. For reasons that I cannot explain without ruining the gaming experience of the previous chapters, he finds himself ousted from the command. The same speech made for her company of adventures in this Uncharted, Nadine is also a character with many emotional facets. The war-forged girl, harsh and ruthless from time to time reveals irony and fragility.

In a nutshell we are faced with a strange couple who is able to make us live an adventure full of charisma, strength, hilarity and emotion in the right quantities. 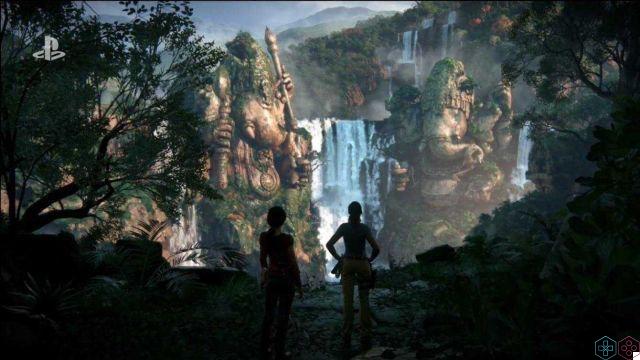 A treasure hunt, an all-female force duet and an India to be discovered are the elements of an unforgettable story

In Uncharted: The Lost Legacy, you can fully breathe the Hindu culture. The plot of this chapter will make you want to jump on the first flight to India. Obviously I'm not talking about the most touristic part of this nation but its culturally richest parts.

The treasure that the beautiful and charismatic protagonists are looking for is the "tusk of Ganesha", the god with the elephant head. During the journey in search of the treasure, it will be possible or not (I highly recommend you to do so) to listen to dialogues, which will enrich the plot with details on the myth of these Gods, on the Hindu culture and on the origin of Chloe.

The sumptuous temples, the rich expanses of vegetation and the multitude of statues will captivate your senses and more than once you will be captivated by the stories of the protagonist

As it is obvious to think the plot, however surrounded by mystery, myth and legend, would not be enjoyable without a noteworthy antagonist. Here then is his appearance Asav. A ruthless Indian militiaman, who wants to take possession of the tusk, in order to acquire power and start a revolution that would lead him to the top of his command. Chloe and Nadine will be forced to fight tooth and nail to ensure that Asav and his militias don't get to Ganesha's fang before them. To complicate matters, there are also the past between this despot, murderer and utterly psychopathic and Nadine, who in the past served with her mercenary troops in the cause of Asav. 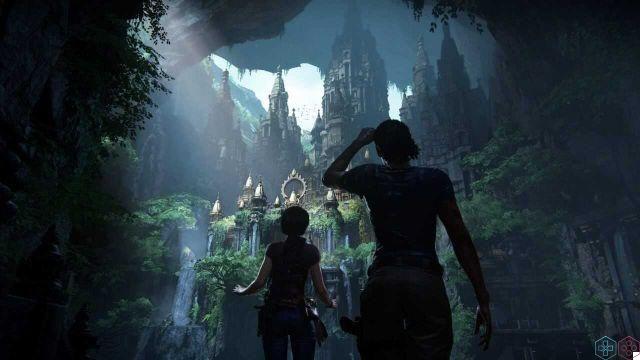 The attention to detail at Naughty Dog is synonymous with excellence. Graphic quality and spectacularity are also unobjectionable elements of this chapter

N has accustomed us to exclusives with rare graphic quality. In Unharted: The Lost Legacy, things haven't changed. Although the title makes use of some "recycled" elements from the multiplayer maps of the fourth chapter, the quality remains far above the average of video games released in this period (on console). The work, albeit painstaking, does not reach the levels of Uncharted 4: End of a Thief or of the latest effort by Guerrilla Games, Horizon Zero Dawn, but is still of excellent quality.

The Hindu temples, the statues of Ganesha, Shiva or Parashurama, are only a small part of the pearls that this adventure reserves for us. Breathtaking waterfalls, Water Lilies and Ferns in their digital transposition are a feast for the eyes. The imposing buildings of the Hoysala Empire and their majestic capitals will capture the attention of even the most skeptical and fussy of players. The high definition textures that make up the game maps are spectacular, from the slopes but also from a few centimeters.

Not to be underestimated is the renewed commitment in the search for expressive and dynamic faces able to offer an added value to a sentence or a moment of silence, which alone is able to make more noise than with a thousand voices that simultaneously shout an emotion. Chloe's look when she talks about her father, her eyes and her expressions tell a story in one look. The same goes for Nadine who is able to strike with her eyes and penetrate even the most solid emotional armor. The anger and regret as he talks about his old army leaks from his eyes, which while remaining a delicate hazelnut color, are able to make those beyond the screen imagine the bright red of the fire they feel at that moment.

Even the antagonist is not exempt from this "facial transparency". Asav in fact transforms himself from a perfect gentleman (albeit clearly psychologically ill) to a ruthless soldier, able to resort to brute force to fulfill his purpose.

Overall, the technical quality, sound and attention to detail are exemplary. The quality that is reflected in these productions is what is expected from a video game that is an exclusive, which therefore does not see the developers forced to compromise caused by the management of completely different architectures. Basically we would like all the exclusives to boast such graphic and technical quality. 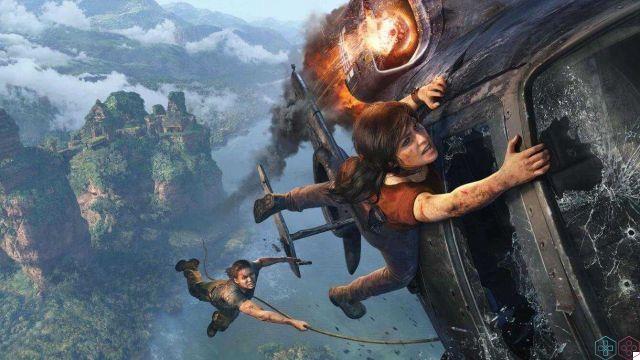 Uncharted: The Lost Legacy takes you back in time. The plot and gameplay have the "flavor" of the first chapters of the saga, but it also takes the best of the last

Finally we go back to the origins. Fundamental elements such as the parkour and puzzles are once again the protagonists undisputed of the game. In the last two chapters of the saga these two elements, although present, had become almost marginal. In Uncharted: The Lost Legacy, domineering and incisive are back. Whether you want to enjoy the main story or are "trophy hunters" you can stock up on unforgettable climbs and fun puzzles.

Enigmas with statues that rotate according to a very precise pattern and able to cause the game over, reflections and prisms to be used to be able to continue towards a less nefarious area, are nothing more than a small part of what awaits you in Uncharted. Furthermore, it is possible to complete a kind of secondary mission, consisting of eleven "mini riddles". Mission that I recommend to follow, firstly because it is fun and enlightening for the plot and secondly because it will entitle you to a very useful reward upon completing the game.

Schooting is usually good, although not very precise (to be an action adventure game it's fine). A piece of advice I would like to give you is to disable automatic aiming as it ruins (and not a little) the gaming experience. With aim assist the game takes the form of a schooter on rails that does not satisfy the player. The gun feed is also good, it will be fun to choose the gun that suits you best. Even if the classic pistol remains a faithful ally. If you feel the need or the desire, you can still use a rich arsenal consisting of pistols, machine guns, shotguns, revolevers, missile launchers, grenades and plastic explosives.

The "old" blends perfectly with the new. In fact, if the elements just mentioned return, there is also the spectacularity of the last chapters. In particular, the use of the grapple and the unbridled races on motor vehicles with the spectacular explosions and crazy races that derive from them. 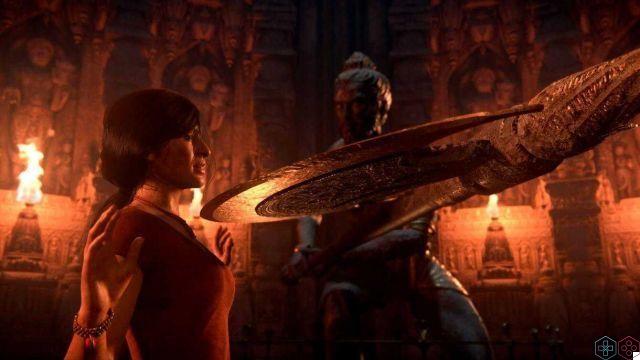 Uncharted: The Lost Legacy is a video game suitable for lovers of the saga, but also for those who want to approach this world for the first time

This chapter of Uncharted combines the old with the new and the sacred with the profane. Long climbs, crazy rides on trains and cars. Spectacular fights and two female characters who they have nothing to envy to their male colleagues, ensure that this chapter satisfies and satisfies every palate in an exhaustive way.

The package in addition is “stuffed” with the already widely appreciated and proven multiplayer of Uncharted 4: A Thief's End.

If you want to know more about this part, I invite you to read the “portion of the article dedicated to the review of the game just mentioned. As there is no kind of change, and it seems pointless and frivolous to report the same information.

In conclusion, we are faced with an excellent title that is certainly a first step towards the "modernization" of a brand that has given us so much. In addition, the budget price and the inclusion of multiplayer enrich a package that is already more than satisfactory.

Welcome to the Game review: are you afraid of the deep web? ❯

add a comment of Uncharted Review: The Lost Legacy, a great step back