It is always interesting to observe how widespread they are now non-violent video games. This is a category of titles that has always been present on the market which in recent years has however reached a certain degree of narrative specialization. From the works of Quantic Dreams, passing through the classics of Telltale Games, we can now speak of a trend that prefers the telling of good stories to any gameplay mechanics that is not a function of them. Even the management systems are often non-violent, but their foundation is still represented by the statistical progression of the score and the respect of some pre-established rules, while the graphic adventures of yesteryear revolved around the resolution of the puzzles (therefore there is also an element here challenge and progression forward). The art of the novel, on the other hand, must be pursued differently, on a case-by-case basis and, Richardson would say, moment by moment.

DONTNOD Entertainment is certainly one of the authors who have accustomed us most of all to this particular category of non-gaming (we say this with an absolutely neutral meaning). Life Is Strange is now a classic and the French development team doesn't seem to want to stop. A few months ago we were on these pages talking about Tell Me Why, which had achieved good results in the representation of everyday life in video games. Twin Mirror, as we will find out in this review, tries to go the same way, not without a few hitches.

On the S, in one hour of traffic

A certainly not accidental detail of the DONTNOD titles is the repetition of some narrative mechanisms within their products. Max Caulfield had to try to save a friend; Alyson and Tyler had to find out what really happened to their mother; Samuel Higgs, the protagonist of the new adventure, must shed light on a case of suspicious death. What these characters have in common is the return home after many years of being away. Each time this return turns into an opportunity to face the remorse of the past.


This literary archetype is always very dear to French developers, almost as if it were an exercise in style. If Quenau has shown us that it is possible to tell a single event in 99 different ways, perhaps there isthe choice of a recurring topos serves to unite the existence of many characters so different from each other. The homecoming is an event that everyone, in a moment of our life, is forced to face. There is no escape. It is, like death, a universal situation, as if to say that we live more or less the same things, albeit with the variants of the case.

Continuing with the review, we will understand which are the variants of Twin Mirror capable of justifying the umpteenth foray of the authors into the realms of everyday life.

Rebuilding Life One Piece at a Time - Twin Mirror Review

In this review we will try not to reveal too many details about the Twin Mirror storyline. Either because it would be a nuisance to readers, and because, on balance, the logical and chronological order of the story represents the least successful aspect of the production. The opening words are interesting: Samuel is a failed journalist who returns to Basswood - his hometown - to attend Nick's funeral, his best friend. At first we don't know why he left, or why he decided not to answer calls from acquaintances for two years.

When Sam attends the wake, he will be forced to get back in touch with the world he had abandoned and to rediscover the hidden connections. Twin Mirror, already from the title, harks back to the famous Twin Peaks TV series, trying to recreate the life of a small town in its entirety. Basswood is a place where everyone knows everyone and in which progress has not yet reached the disarming peaks of the great American megacities. This apparently idyllic existence, however, is marred by a large coal mine that has caused health problems for many workers and by petty crime also connected to the closure of the plant. The investigation into Nick's death will start from these phenomena, which appears to have occurred under quite suspicious circumstances.


They return, therefore, i meet tanto looking for a DONTNOD, such as the life of the small community as opposed to large urban centers, environmental pollution and social problems, seasoned with a strong thriller vein. Nothing new under the sun. Samuel is a character defeated by existence. He lives on memories - his relationship with Anna, which ended for no real reason; the moments spent with Nick in front of a Pac-Man cabinet; his old job at the newspaper; the friendship developed with Nick's daughter - and rebuilds them within her mind, in what the game calls the Palace of Memory.

Ah, and apparently he also has an imaginary friend who will advise him on what to do from time to time. We will know nothing of its nature until the final stages of the adventure. Samuel is therefore a personality obsessed with logic and truth, driven by the need to understand the world in a mathematical function and unable to truly understand the essence of human beings, if not mulling over his condition as an outcast. In this, it is a very successful and multifaceted protagonist. 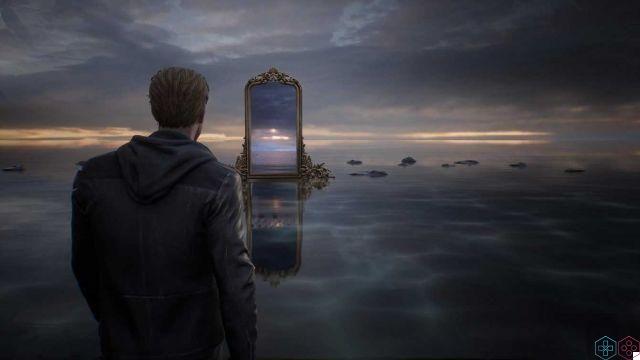 A cast not too bright - Twin Mirror review

Too bad the same cannot be said of the supporting actors. Perhaps for a matter of space (the game does not last long, about five hours), or perhaps for a bad management of the narrative rhythms, the rest of the cast fails to shine by characterization. Neither Anna, who will accompany us for most of the title, nor the other characters really manage to break through the screen, limiting themselves to a few appearances and finally resulting a bit static and manneristic. Fortunately, Joan is saved, Nick's daughter, who thanks to her youthful impetuosity will take us back to the good times of Life Is Strange for a while, and the imaginary entity, always shrewd and ready to make us reflect in times of need.


As proof of this, just think that we will see the culprit of the murder only once before his identity is revealed: how is it possible for the reader to feel emotionally involved? DONTNOD tries to insert some touching moments, but it doesn't always do it right. In one of the opening scenes, during the wake, Anna sings a song on the guitar to commemorate the deceased, bursting into tears. Who would ever dream of singing a song at the funeral of a loved one? In addition to being a little credible scene, it was also about an absolutely unnecessary excess of pathos, which reinforced the feeling of witnessing a story written on autopilot. Much better, at this point, the quiet acceptance of everyday life that we so much appreciated in Tell Me Why.

There, Alyson's panic attacks were managed with a smartphone app; here, when Sam is crushed by the weight of his memories, he will have to face them inside his mind along special sections. Certainly a scenic and effective representation, but also more banal on a purely literary level. This comparison could perhaps render the measure of the mediocrity (or perhaps we should say "middle") of Twin Mirror. Can we talk about a bad story? No, but it is also difficult for us to find really interesting ideas inside. 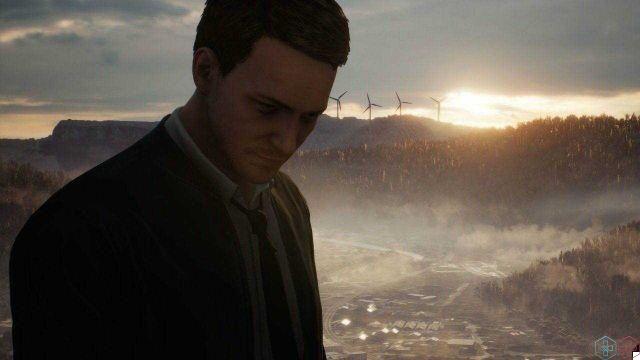 We weren't expecting any major upheavals from Twin Mirror, given the developer pedigree. The gameplay, in fact, does not provide any particular news for the genre. As often happens in titles of this type, we will find ourselves exploring the environments to collect clues, talk to non-player characters and solve some very simple puzzles. The variant that should characterize Twin Mirror from the other products of the French software house is represented by the Palace of Memory.

When we have to reconstruct what happened at the crime scene, Sam will find himself completely immersed in his mind. Here he will be able to put together the various clues collected and arrive at the solution of the case. We are not very far from what we have seen in titles like Batman: Arkham Asylum o The Witcher 3, since there will be no possibility of making a mistake in any way. We will therefore limit ourselves to going around to examine each point of interest and then try to organize the events in a logical and chronological way. The idea is not bad, but it is repeated too often during the adventure and ends up becoming a simple formality to be completed in order to continue the investigation - also because it is not possible to experiment.

Not even the freedom of choice seemed so pronounced. The decisive choices are few and often they do not really affect the evolution of the story. We were already used to this, but Life Is Strange allowed us to experiment by going back in time, while Tell Me Why proposed a dialogic nature enriched by the dualism of the two protagonists. Here, however, DONTNOD makes no effort to propose interesting dynamics that have not already been seen in any other adventure of this kind.

Removed a couple of very fascinating sequences, both in the last part of the game, in short, Twin Mirror is proposed as a truly very classic work and, unfortunately, devoid of flashes of genius. There very short duration of the game does not allow some interesting ideas, such as the Palazzo della Memoria, to develop adequately and, in the end, the feeling is that of being led by the hand until the end. 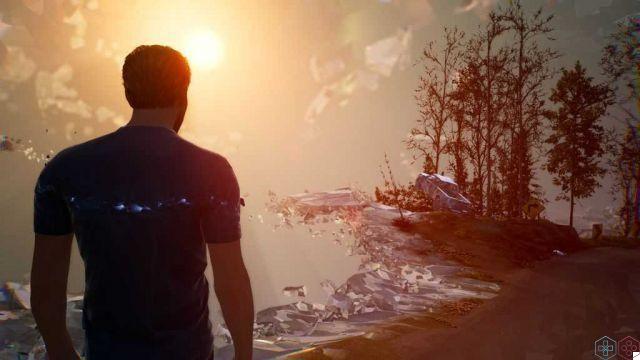 Where the title does its job is instead in the technical sector. The title is very light and well optimized and it can also run on a PC with a configuration that is no longer in step with the times. We tested it with the details set to Ultra and found no bugs or problems whatsoever, except for some visual glitches and skipping audio that occasionally stumbled. The character models are solid and detailed, while the textures are more realistic than in the past and offer good definition. The frame rate is stable and the reflections of the lighting system are very pleasing to the eye.

Basswood is a melancholy town, often grayed by the rain, in which urban views and mountain landscapes alternate seamlessly. The soundtrack follows this decadent mood very well, but does not skimp on a few rare moments of lightness in the most intimate and sunny moments of the story. Maybe some really important themes like those of Life Is Strange are missing, but as usual the development team has taken particular care of this aspect. The dubbing, in English, is of excellent quality, but Twin Mirror is entirely underlined in Spanish. 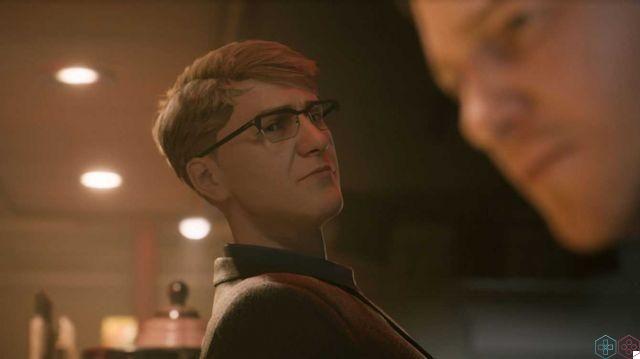 At the end of this Twin Mirror review we realize that we have highlighted many manufacturing flaws. Thereby we don't want to say that DONTNOD's latest effort is a bad title, only that all his interesting ideas are not developed properly. The game does not last long, the characters are not all well characterized and there are no moments capable of tickling the player's intellect, neither on a literary nor a playful level.

Let's close, however, with a little reflection: Twin Mirror is a game where violence won't be used even once. Shortly after The Game Awards, we hope that an absolutely non-violent title will sooner or later win such a prestigious award. The maturity of the media passes, in our opinion, also from here. At DONTNOD we have to make this little acknowledgment.

Have you tried Twin Mirror? Let us know in the comments and stay on techigames for any news on the world of video games.

add a comment of Twin Mirror review: exercises in style