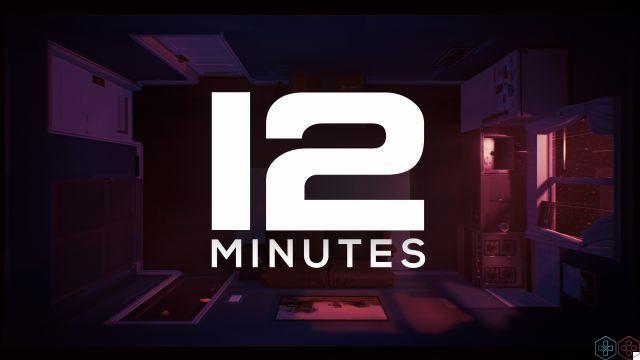 If you think twelve minutes is short, you obviously haven't played Annapurna's latest title yet. For this reason, today we want to tell you about Twelve Minutes in our review

Just one indie developer, just over ten minutes to escape from a mysterious time loop and a cast of famous names. As if that weren't enough, Annapurna has always proved to be a guarantee by talking about “atypical” securities. Twelve minutes, edited by Luis Antonio and no one else, it is finally available exclusively for the Microsoft ecosystem and today we want to tell you about it in our review.

Despite following the classic lines of the Point and Click, Twelve Minutes is a very special title. The whole story takes place in our protagonist's apartment, which he shares with his wife. After a day of work, the couple prepares for a romantic evening, but their plans are turned upside down from the raid of a "policeman". The agent, after breaking into the apartment, accuses her of the murder of her father and after having immobilized her on the ground decides to beat our alter-ego to death. Against all expectations the epilogue of the story is not the death of the protagonist, but the beginning of a time loop in which we will find ourselves trapped, reliving the story indefinitely. Will we be able to solve the mystery and get back to normal?

As can be seen from the title, the whole story takes place in twelve minutes, which it is exactly the time that the player has at his disposal to solve the mystery. The formula of the game is that of the traditional Point and Click, supported by an aerial camera that allows us to see and control each room of the apartment from above. By moving our character around the house, it will be necessary to collect the key objects necessary to progress in the story, combine them with each other and use them to solve puzzles that the game puts us in front of.


The main rules of Twelve Minutes are two: the first is that in case of death or loss of consciousness, the loop starts over from the beginning. The second is that if the mystery is not solved within 12 minutes, the loop starts all over again. In this way, a game that traditionally would last just over an hour, gets players busy building pieces of history a little at a time. to discover the truth behind the mystery the death of his wife's father.

Who is lying? - Twelve Minutes Review: Who's Lying?

The strength of Twelve Minutes is certainly based on the narration, and more precisely on the dialogues that carry the story forward. Every detail to find and combine the key objects, in fact, is hidden in the dialogue lines that the characters exchange during the loop. Based on the choices made during the cycle, there will be repercussions on the timeline that will allow us to obtain key details and information about the wife and the cop. Piece by piece it will be possible to gradually investigate the facts behind the death of her father, to understand who is lying and who is not and finally arrive at the solution.

Consequently, the gameplay is decidedly simple and repetitive, often resulting (with extreme ease) nel trial-and-error. Most of the loops will prove inconclusive to the story, forcing the player to replay the sequence dozens of times uselessly to find the missing piece in the story (also due to the absence of an internal game saving system).

A question of aesthetics - Twelve Minutes review: who is lying?

Among the first elements to strike us positively, putting their hands on Twelve Minutes, there are the strong cinematographic imprint and the chosen aesthetic by Luis Antonio for his game. The game is, graphically and technically, simple but functional and beautiful to look at. Thanks to the air chamber it is possible to control every room with its relative objects without problems (or almost). To this is added a graphics sector simple but convincing, thanks also to the nice work on the lights and on the details of the environments. The short musical interventions that characterize the main theme frame everything perfectly, without ever being abusive or redundant.

Returning to the cinematic setting of the title, it is clear from the end credits (simple but definitely spot on) what the developer's goal is. Twelve Minutes is a really well orchestrated dystopian thriller, supported even more by the cast that lends the voice to the three characters. In fact, he, his wife and the policeman are voiced by respectively James McAvoy, Daisy Ridley e Willem Dafoe. An exceptional cast, therefore, which puts even more meat on an already substantial barbecue.

While the game turns out to be a little gem in the Game Pass's crowded indie landscape, we are faced with a couple of underlying issues that keep it from getting full marks. The first a good amount of bugs are made up (minors, actually) than the gaming experience. It may happen that some dialogues are replaced by the lines of the development code, or that the wife gets stuck preventing us from continuing with the loop, forcing us to wait for the time to run out to start over.


The second, more serious, resides in the aforementioned componente trial-and-error. In particular, in Twelve Minutes there is a hidden key object, not properly arranged on the screen, which will lead you to repeat the loops dozens and dozens of times without coming to the solution. We understand that the goal of the game is to get the player to build the story piece by piece, but repeating the same action over and over for hours, without a shred of a clue, is simply crazy.

Twelve Minutes, as mentioned, is a great game. The concept of the whole story is innovative and well thought out, the story involves and the technical sector runs well in its simplicity. The aforementioned cinematic setting, in addition to the game's five-star cast, they are a decidedly valuable addition. On the other hand, however, the large number of bugs and the unbearable trial-and-error component make an otherwise almost perfect game lose valuable points.

Net of what is analyzed in this Twelve Minutes review we would like to recommend it, especially considering that the title is available for free on Microsoft's Game Pass (therefore for Xbox and PC). As always, we greet you and invite you to stay connected on techigames for more reviews, news, guides and much more from the world of video games. Also, don't forget to check out Instant Gaming for always discounted games at the best prices. Hello!

add a comment of Twelve Minutes Review: Who's Lying?