Shortly after the release of the colossus Final Fantasy VII Remake, Square Enix has released another remake of a certainly less known title, let's find out together in this review if Trials of Mana is worth buying

Last month we were able to put our hand to that much coveted and dreamed of Final Fantasy VII Remake. A title that has managed to split the fanbase so much that it marks a real watershed for Square Enix. An ending that determined not so much the sales of this or the next chapter, as much as the vision and expectations of all gamers. Square Enix, however, has never been "only" Final Fantasy.

The company has been at the head, both in terms of development and publication, of many other projects that have often been overlooked. Niche titles, or not adequately advertised because they are considered such, or released in conjunction with media giants. Vero, Trials of Mana?

An attempt, according to what Square Enix has said several times, to try to rejuvenate a title not only on a graphic level, leaving aside the now antiquated (albeit always terribly fascinating) 16-bit, but also for mechanics and gameplay. Will they have succeeded? Let's find out together, in our Trials of Mana review. 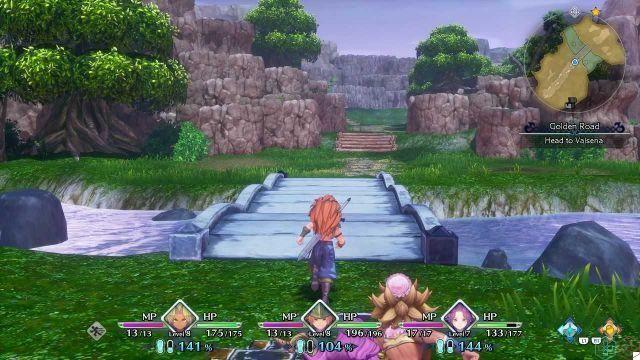 We have already talked about it in a preview based on the demo released a few months ago on the digital stores, but Trials of Mana will take you to experience the story of six different protagonists. Your task will be to choose a main character and two supporting characters. This choice will only affect the initial and final part, while the central body of the adventure will remain the same whatever choice you can make.


The cast of characters is quite varied both for background and for physical and magical abilities. From Duran, the classic sword-wielding warrior devoted to his King, who sets out to become stronger.

We will know then Angela, princess of the kingdom of Altena and sorceress, albeit not exactly very strong. Kevin he is the furry of the group, half man and half beast, as strong with his fists as he is weak with words. From furry we move on to Loli. Charlotte she is the granddaughter of the Priest of Light of the city of Wendel, the sacred city, a key figure and one that you will meet often during your adventure. Hawkeye is a noble thief who sets out in search of what has been taken from him and, finally, Riesz she is the young princess of the kingdom of Laurent and captain of the royal guard. 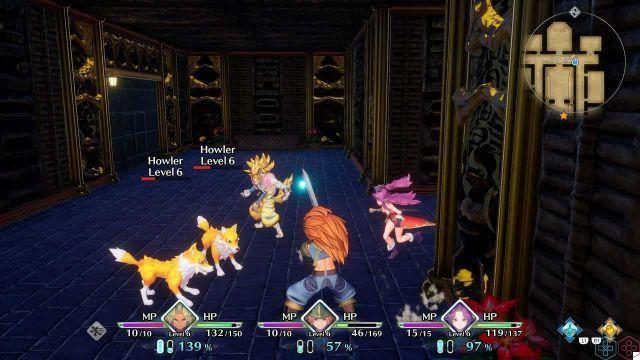 The cast of characters is quite varied and some of their fates will be inextricably crossed. Whichever choice you make, the main body of your adventure will be the search for the eight elemental spirits scattered around the game world. A search that will then lead our heroes to take possession of the legendary Sword of Mana. All making their way through the various antagonists of the game, all with a common goal: to free the terrible Benovodon, sealed in the eight different Mana Stones, able to completely destroy the Mana Tree.

A rather classic and certainly not very innovative script, but we are still talking about a title conceived in the mid-90s. While this isn't necessarily a flaw, a general rehash of the narrative fabric would have been welcome if nothing else. Not so much for the banality at the base, as for its repetitiveness. The narrative is a constant mishmash of heroes, anti-heroes, revenge and betrayal. A continuous banality that will often lead you to skip dialogues and scenes, without even having the feeling that you have missed something. 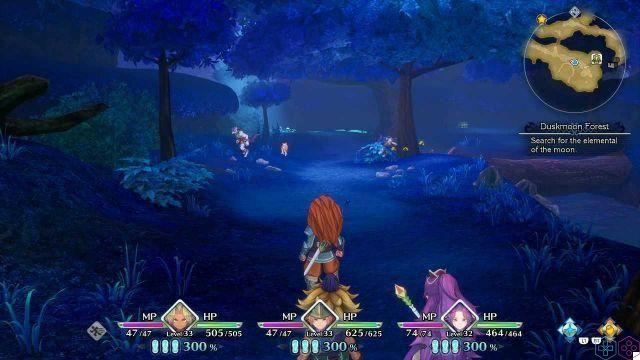 The only welcome addition are the flashback chapters, phases that will start at your pleasure as soon as you meet a new supporting actor and that will allow you to relive their adventure until then. Definitely an easy, but still useful, way to give your teammates and their respective native kingdoms some foundation. Grit your teeth and carry on through the campaign a little too linear for the 25/30 hours it will take you to complete it. The end-game, conceived exclusively for the Remake, will give you a lot of satisfactions.

If from a screenwriting point of view we are really not there, what has us passionate and entertained is the combat system. Technically, Trials of Mana is a real hack 'n slash, a JRPG action based on the Job System rather than on the equipment. The fights will start near a group of enemies, visible on the map, and we will be able to control a single character at a time in real-time combat.

A front button is dedicated to the light attack, one to the heavy attack, one to dodge and one to jump, while by simultaneously pressing the back and front the different specific abilities of the character will be activated, which can be activated through the blue bars found below. HP, or you can use items. 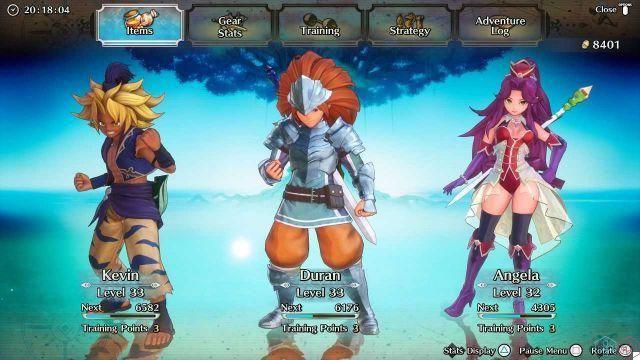 On the customization front, Trials of Mana is a good JRPG action offers different tools to make our characters take the path we want. You can, first of all, modify their weapon, armor and accessory, all of which can be found by exploring the various game maps or by purchasing them in the various shops that you will have available.

By spending the Training points that you will get by leveling up, you can also develop the various characteristics of the characters to your liking, letting them learn new skills. This is where Trials of Mana's most interesting mechanic comes in, the Job System.

Once you get to a certain point in the campaign (we do not reveal anything to avoid spoilers) you can choose how to develop the class of your characters. Each character has 9 specific classes available, from which you can choose in 3 different choices. Starting from the first class, the one with which you will find yourself starting the game, you can make the choice of advancement of Job at level 18 and level 36, while the fourth final class will be unlockable only in the end-game.

Advancing your character's class will allow him to unlock more and more powerful abilities. The choice is not final, but still pay close attention because each class has very different skills, statistics and characteristics than that of the other branch. 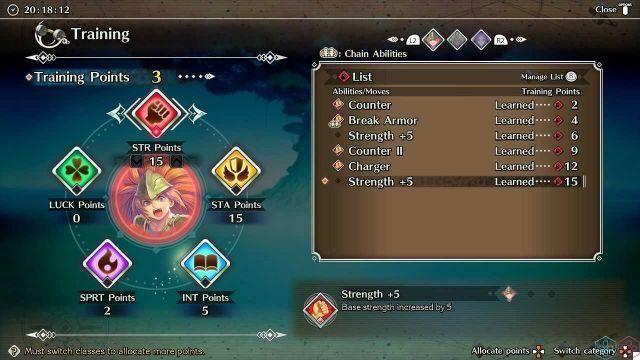 All the quirks typical of the world of Trials of Mana also return, starting, in the first hours of the game, from moving between the various maps using real cannons. Although you will unlock your "ship" about halfway through the adventure, in the first sections you will not be equipped with it and, rather than being retraced for miles and miles of road, Square Enix has decided to let you travel… Shoot from cannons.

The pots in the inns are also returning, a system through which, by donating seeds that you will find around or by defeating monsters, you can obtain objects and equipment gradually increased in rarity based on the level of the vessel.

Iconic NPCs, unlikely relationships and crazy dialogues also return. Another addition to the Remake is Lil 'Cactus, a real small cactus that you can find in almost all Trials of Mana maps and which, based on how many you have found, will guarantee you various bonuses. From a chance to get double experience at the end of a fight, to various discounts in shops and the ability to see how many chests are left on the map and much, much more. So get ready to peek in every corner and behind every tree, looking for pots, chests and small cuddly cacti.

The world of Trials of Mana is very colorful and pleasant to see and experience. Square Enix has certainly done an excellent job on the graphic modernization front, creating very detailed character models both in appearance and in equipment and a lively and pulsating game world. Too bad for some smudging in the textures and in the uploads of the same.

Especially in open maps, the pop-up will be at home. Our test took place on PlayStation 4 Pro, where we did not see sensational drops in Frame Rate, rather stable on 60 fps. We didn't try the Nintendo Switch version, but it should settle at a stable 30 fps. Present, as always, the double English and Japanese track for the audio, while there is no Spanish localization. 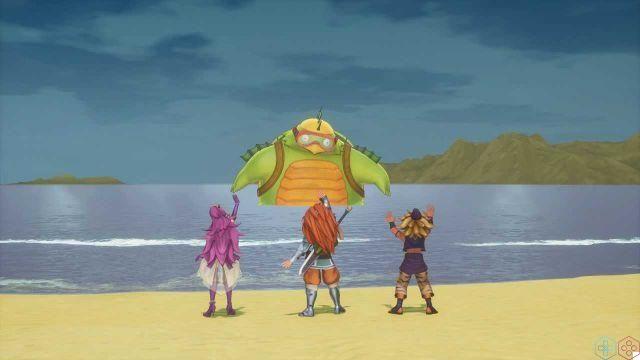 To conclude this Trials of Mana review, we can only admit that in this case Square Enix could do a little more. Especially at the script level, the side where Trials of Mana is trudging too much now in a 2020 in which the consumer expects a lot more. The fun and challenge of a simple, intuitive, but equally convincing combat system remain.

A few valuable additions here and there, a more than good technical sector and the weirdness of the game world close a package that certainly could have been better packaged, but one that will entertain any JRPG enthusiast. Try it!