The Streets of Ink Review | Replaying

First appointment of the new Rigiocando column, with the review of Le Strade d'Ininj, a Roll and Draw game by Horrible Games. Discover with us the best pearls in the world of Board Games

Have you ever arrived at a fair or in a game store and bewildered by the shelves filled with Board Games as fascinating as they are unknown? If the answer is yes, then from now on you will no longer have to be afraid: Replaying is the book for you!

In this new periodic appointment we will sail together through the world of Board Games, recovering titles that have made history and discovering small hidden pearls. The first date is with The Streets of Ink, a gem created by the guys from Horrible Games arrived in Spain in 2018 thanks to Ghenos Games. Ready to find out with us? 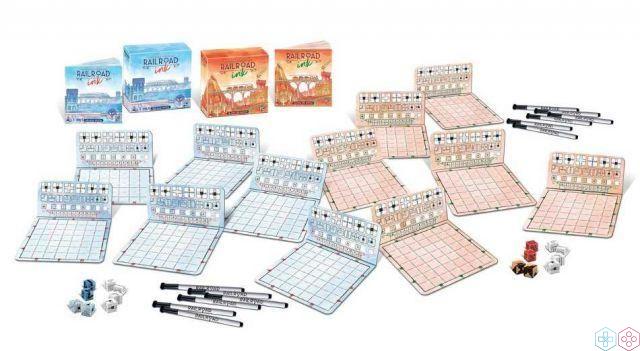 The gameplay - The Streets of Ink Review

The Streets of Ink is a simple board game to learn and with fast and stimulating gameplay. It is a Roll and Draw Title, that is, with the “Dice and Drawing” mechanics. Each round, a player rolls four plain (white) dice and four special (colored) dice, which apply to all participants. On each face of the white dice there are fragments of the route - roads, railways or stations - which each player must draw secretly on his own sheet. On each face of the colored ones, however, there are special elements that will also drastically modify the structure of your paths.

The object of the game is to draw roads and railways on your own board, connecting the exits and accumulating more points than the opponents. It is not possible to connect two different types of routes (roads or railways) unless the dice bring out a station, which will connect the two. The four white dice, as we have seen, will determine which fragments of the path you can draw; the four colored dice, on the other hand, (red or blue depending on the edition of the game you choose) will tell you which natural inconveniences will stand in your way. You can use one box at a time or both, rolling all three sets of dice each turn. To rehearse the game before this review, we played The Streets of Ink with both boxes, greatly increasing the challenge.

The game continues until seven rolls of the dice have run out, and therefore seven rounds. When finished, each card is revealed and points are counted. Each player receives points based on the number of exits - represented by arrows on the sides of the board - connected with the same path. To accumulate points, however, it is not enough to connect the outputs to the best. It is also necessary to create a network as long as possible for each type, road or railway, to avoid leaving incomplete and unfinished paths and to fill as many central spaces as possible with valid paths. 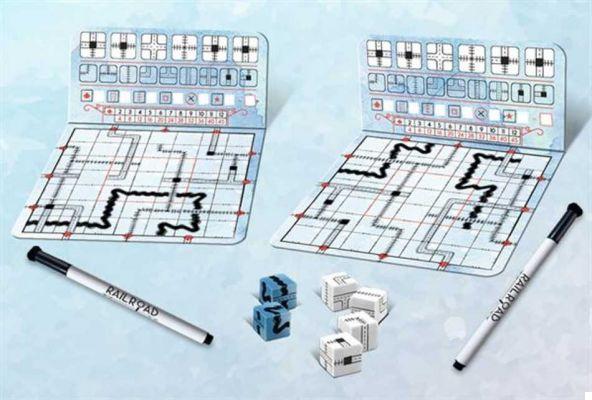 Our opinion - The Ink Roads Review

Quick to learn and to explain to new players, The Streets of Ink is the perfect game to take to parties or to play in the evenings with friends. The Roll and Draw system makes it varied and stimulating even from game to game and the ability to erase the ink from the cards means that it can be replayed almost indefinitely. The winning point of the game is certainly the personal challenge: each new game is in fact an opportunity to test yourself and invent more refined courses. Furthermore, the competition is only marginal: every turn the dice are rolled together and a climate of complicity is established between the players. In our opinion, the taste, rather than winning, lies in finding out at the end of the game which solutions the other players have come up with, rather than solving a special die and developing one's own network.

Sold in a practical and light box, it can also be easily transported anywhere, and played both indoors and outdoors. The two versions, Deep Blue and Flaming Red, can be combined to increase the number of players and the challenge. The first integrates the Lake and River elements, the second Lava and Meteor, adding special dice to be rolled each turn.

In conclusion to this Review, therefore, The Streets of Ink is a game suitable for both casual and veteran players.; cheap and fast, it will guarantee you evenings of entertainment and challenge, as well as a pleasant opportunity to test your engineering skills. Seeing is believing.

add a comment of The Streets of Ink Review | Replaying