The Outer Worlds review for Nintendo Switch, the universe in your pocket

Here we are back with the review of The Outer Worlds port on Nintendo Switch. Great success on the part of Obsidian, or a mistake not to be repeated?

The Outer Worlds has just landed on Nintendo Switch, riding the wave of success of the title on other platforms. After PlayStation 4, Xbox One and Microsoft Windows PC, the galactic adventure at home Obsidian it also arrived on the Nintendo flagship. After trying it for a few days, we churned out the verdict: coup from Obsidian or title to avoid? Let's find out together in this review of The Outer Worlds for Nintendo Switch!

The Outer Worlds, what are we talking about?

The Outer Worlds is an Obsidian Entertainment RPG released in October last year for 4 PlayStation, Xbox One and PC. The story, while not all that original, lends itself perfectly to the type of game we're about to venture into. We are in 2355, in a future cyberpunk that remembers Borderlands in some ways, and Fallout in others. The universe was colonized by terrestrials, who traveling light years aboard their spaceships managed to reach even the most remote meanders of the known.

To face these endless voyages, the ship's crew are cryogenically frozen and thawed upon landing, but something goes wrong and Hope (the ship on which our adventure begins) gets lost in space. Hope will remain adrift in space for years, without anyone coming to rescue the crew. A mad scientist named will succeed against all odds Phineas Welles, the first character we will meet in the game as well as the one who will thaw our character. Here we find the first hallmark of those who have been doing RPG for a lifetime, and do them well: the character editor.

The editor, despite being quite simple, allows you to fully customize our character both in physical appearance and in the distinctive signs, passing through the skills and even choosing the use before setting sail for space. After customizing our protagonist, we discover that the game's plot revolves around awakening the rest of the crew, obtaining the precious materials necessary for the enterprise scattered around the universe. Already from this point it is possible to notice the heavy downscaling of the game compared to the home console versions, but let's go step by step. 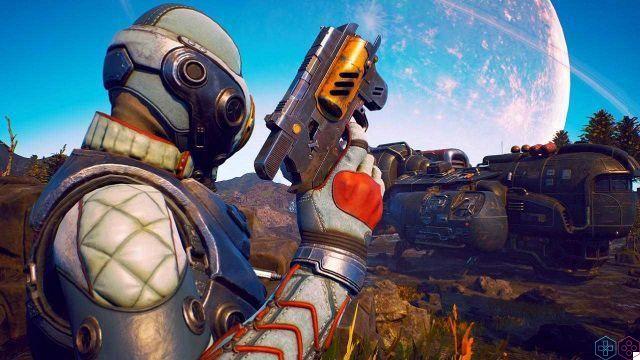 Already from the first minutes of The Outer Worlds it is possible to clearly recognize the hand of Obsidian, and we are hit by a wave of nostalgia thanks to the similarity of the game with Fallout New Vegas. All that was good in the masterpiece of Bethesda we find it again (with great happiness), but with some necessary changes. First, The Outer Worlds it is not open world and that's fine: the rooms, large but circumscribed, are well characterized, rich in details and full of objects and weapons of all kinds. In addition, the graphic style and color palette used by the developers give an identity to the game, making it one of a kind.

In the full line of the genre we find the character development system based on skill points and the possibility of disassembling or upgrading the various weapons that we find throughout the game, as well as the armor. Each time you level up you get them 10 points to spend on skills that vary, in full Fallout line, from combat skills to hacking skills, passing through speaking skills.


Also the different alternatives of approach to the game are varied and well structured, and this guarantees a great replayability. The player can choose whether to behave well, be a criminal, a thief or persuade people to achieve their goals. You can get there by making a killing or playing stealth, just as you can tarnish your reputation or not. This enormous freedom of maneuver is evident from the first minutes of the game, causing a pleasant deja-vù to the taste of Dishonored.

Nothing innovative, but a lot of quality - The Outer Worlds Review

What makes The Outer Worlds such a great game is probably also the reason for its success at its debut in October 2019. Although the game heavily takes over mechanics and stylistic choices from some milestones in the genre, Obsidian's touch is always tangible. . The characters are well characterized, the planets are colorful and interesting to explore, and the side activities are entertaining. Also, the humorous nuance fits perfectly with the game, making the many dialogues pleasant to follow.

Even the choice to include the supporting characters it works. During the game we could find ourselves in particular situations or difficult to unravel, and resorting to the help of the partner on duty can prove to be a winning strategy. In The Outer Worlds there are everything you are companions to unlock, each with its own story to be explored to get useful bonuses, items or skills. But forget the "romance" in Mass Effect style: here it is only possible to deepen the bond between the characters, but not to see them enter into intimacy.


Everything, packaged well, gives the public a game fun, durable and highly replayable even just to unlock the different possible endings. In this regard, the fast travel is fundamental, which allows you to jump between the unlocked points of the map avoiding long and boring travel sessions. The only drawback, in this regard, the long and tedious uploads of which the game is (alas) studded. However, on balance the Obsidian formula seems to work great, regardless of the context in which we find ourselves. Wastelands or unknown planets, it makes no difference. 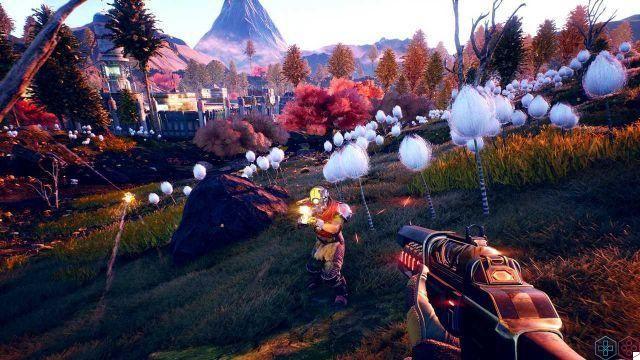 But the showdown comes for everyone… - The Outer Worlds Review

At this point, let's get to the heart of the matter: the huge problems of porting on the Nintendo Switch. Take the picture we have done so far in the game and cover it with a sheet of tissue paper: This is The Outer Worlds for Nintendo Switch. Everything that is beautiful in the game is undone in a real port very bad, showing the deep wounds caused by a far too brutal downscaling. Although the essence of the game remains intact, the technical blow suffered by characters, settings and props returns the feeling of something that, in theory, would not make sense to exist.

The game should run at 720 with the console connected to the TV via the dock and at 540 in the portable version, but this is not always the case. The detailed and colorful landscapes that we had so much appreciated in the fixed counterpart of the game result here blurry at best, even incomplete at worst. Objects in the background poop out like mushrooms several seconds late. We don't even want to talk about rendering objects and textures. Frame drop? There are those too, rest assured.

Furthermore, numerous details have been completely removed to further lighten the game, conspicuously stripping the environments. In some places, even it is difficult to distinguish enemies from allies and in no time we see the reputation we have worked so hard on being tarnished.

Finally, the adaptation of the camera and aiming system is slightly cumbersome, but here we break a lance in Obsidian's favor. We understand that adapting a control system from a large pad like that of an Xbox or PS4 to the tiny sticks of the Switch, it is not at all simple. After several hours of gameplay and a pounding migraine, frustration prevails over all that is good in the game by leaving so much bitterness in the mouth. 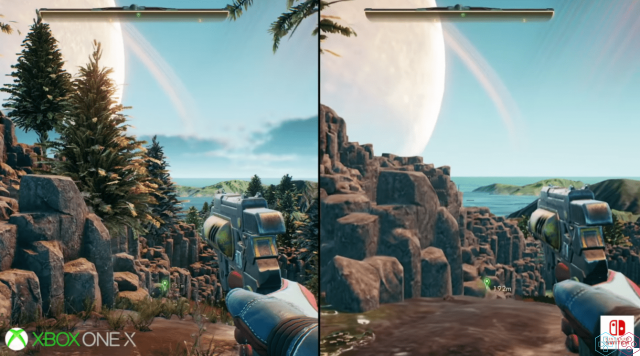 At the end of this review of The Outer Worlds for Nintendo Switch, in light of what you have read so far, you are surely wondering: do I buy it or not? The answer is no, but with reservations. The Outer Worlds is a really great game, probably a must for lovers of the genre. Our advice, therefore, is to play it on PlayStation 4, Xbox One or even better on PC. The technical problems of the Switch version are so many and so obvious, that our advice (reluctantly) is to turn them very wide. If you really don't have other consoles and you absolutely want to play it, don't say we didn't warn you.

This was The Outer Worlds review for Nintendo Switch. As always we hope to have helped you in making the right choice, and before wishing you a good gaming we remind you to stay connected on techigames for news, updates, reviews and much more on the world of video games. Hello and see you next time!

7 How to listen to a beautiful song underwater

The Pedestrian PS5 review: think outside the box ❯

add a comment of The Outer Worlds review for Nintendo Switch, the universe in your pocket