Team Sonic Racing brings us the blue hedgehog and his friends on very fast cars. Let the challenge begin!

Think of the fastest blue hedgehog in the world and imagine him in a beautiful racing car. thus it was born Team Sonic Racing. The latest video game from SEGA takes up the theme of crazy racing in Mario Kart style, filling the seats with the most famous characters of the saga of Sonic The Hedgehog. The game was released for all the most important videogame platforms, so let's talk about PS4, Xbox One e Nintendo Switch thus trying to reach the greatest number of fans. Team Sonic Racing is absolutely not a masterpiece and many will say that it does not come close to its main rival starring the brothers Mario and Luigi. Still, the product SEGA manages to carry a breath of fresh air, which will not make gamers scream with joy, but which will at least make the game more compelling.

Team Sonic Racing is not very complicated starting from the main menu. The game has several game modes. We have the mode Countryside, The mode Online and a mode for the game local. Of course, like any self-respecting crazy racing game, the different modes have the option of being played cooperatively with up to 4 friends in total. Speaking of these modes, it is useless to confirm that the most varied is the Campagna, which will put us in front of unique challenges and grand prizes with the sole purpose of winning and beating the mysterious Dodon Pa. This character will invite us to Planet Wisp to attend his personal Grand Prix. We will find ourselves driving on tracks of different kinds, from futuristic to those impossible even to imagine.

Precisely the sector of the tracks manages to save this game from a score below the sufficiency. Planet Wisp it is, in fact, divided into 7 locations which in turn have 3 different tracks, for a total of 21 circuits. The latter are well done, both in terms of design and graphics; this point in favor becomes negative when the environment is almost always better than the cars and the character who drives them. In fact, every now and then it almost seems that the game gives the feeling of a square graphics going to get imperfections to cars, objects that are thrown and characters. 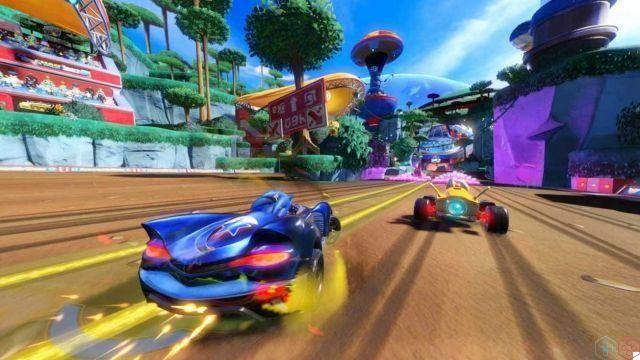 A point in favor of the game are, however, the music and dubbing in Spanish. In fact, it is possible to hear the voice of Claudio Moneta (Goku in Dragonball) when Shadow speaks, or that Renato Novara (famous for the voice of Ted Mosby) as the protagonist, Sonic. All this leads Team Sonic Racing to have a quite perceptible scenic imbalance, thus leading the gamer to perceive different sensations in reference to the enjoyment of the game.

It is played for the Team - Team Sonic Racing Review

Unfortunately for SEGA, Team Sonic Racing is not up to Mario Kart, both for content and for the graphics department. Fortunately, however, there is always a "but", and what saves Sonic and his friends is precisely the novelty brought by the team play. The strong point of the game is precisely that of increase competitiveness and cooperativity not only between player and AI but also between different players. In mode Adventure in coop and in that Online you will find yourself having to compete with your friends to try to get to victory. One point less to the game for the simple fact that it is not possible to face the Campaign with another player, the reason why is still unknown.


The difference with Mario Kart and similar games is that although it is possible to create a team, in these games it is only possible to form two teams. In Team Sonic Racing, however, it is mandatory to play with a team of 3 members and compete with one or more different teams. Furthermore, the important thing does not seem to arrive in first place, but to try to place the different team members in the best positions. This is thanks to a final scoring system that rewards Formula 1-style positions. Consequently, you don't expect to win by finishing first if your teammates make it to the back of the line.

Team play does not stop only with the score earned. In fact, in Team Sonic Racing you can choose to offer your teammates the weapon or the content obtained from the mysterious boxes that we find around the circuit. The advantage of offering or accepting the offer of a weapon is that it increases its power exponentially. For example, if a friend of ours offers us a missile this will automatically triple so as to make us receive 3 missiles. Furthermore, after the exchange, we will get some stars that will go to load the turbo bar. The latter will also charge when drifting, the longer they will be and the more the bar will reload. Once fully charged, it will be possible to use the turbo which, if used simultaneously with our team, will have a greater duration and power.

In Team Sonic Racing there is also the possibility to customize the car of our main character. By themselves, each character will have their own car to which we could add airbrushes and modifications that we like best. You think you might as well go out and about with a beautiful one gold-plated racing car. While customization is limited, however, we have many other things to consider before we hit the track. First of all, the characteristics of each individual character.

The latter are divided into three types: Speed, Technology, Potenza. The former are led by Sonic, of course, and are those who have speed as their main feature. The Tecnica types, on the other hand, have on their side an improved maneuverability and a more powerful drift. Finally, we have the most powerful characters who manage to destroy obstacles only by colliding with them.

A high level challenge, but not very high

Team Sonic Racing presents itself with a difficulty on the level of any player. It is possible to unlock higher difficulties in the Campaign mode which can increase the competitiveness level of the AI ​​making you enjoy the game more. The fact is that if Sonic had run with his legs, probably, the adrenaline would have had a higher speed. What saves the SEGA title are the innovations it has brought in terms of team play and mini-games in Campaign mode. For the rest, the game slightly exceeds the sufficiency and Sonic runs but finds himself chasing the competitors.