Taste Of Power Review: an RTS that doesn't convince

Here is our review of Taste of Power, RTS developed by OneOcean, which attempts to combine classic elements of the genre with novelty

The guys of OneOcean they try to make a mark on the market real time strategy games with their new title, Taste of Power. The title takes on the challenging task of merging classic elements of the genre, drawing mechanics and gameplay iterations from games such as Starcraft and Warcraft, to a style of play that, especially as regards the management of the army and public life of the city, strongly recalls what was seen in the series was total.

The game is available from October 10, but was already available for purchase in early access starting in December. Will the guys of OneOcean have succeeded in the enterprise of creating a title that manages to blend such different elements of gameplay? Find out thanks to ours Taste of Power review.

Taste of Power presents itself from the first moments as a classic RTS, both from a visual and gameplay point of view. There are many game modes available and all have some changes to the mechanics, which guarantees the title a remarkable longevity. To help increase the number of hours you will spend in the company of the creation of OneOcean there would also be one Online mode, in which you face another player on a map with the aim of obtaining total supremacy, annihilating the opponent and his army.

However, it was not possible to actively try these games, as there were never other players available. But the game is enjoyable especially if played in single and the challenge level it is truly remarkable, especially on the higher difficulties. But now let's see in more detail how the game is structured, thanks to our review of Taste of Power. 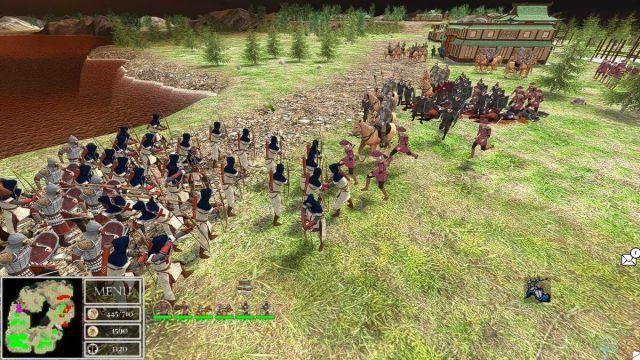 The first of the single player modes that will be proposed to us and the heart of the production is the Story mode. By playing we will follow the vicissitudes of commander Tiberius of Lotharingia, At the beginning of fifteenth century, in a war waged by the European Confederation against the other great powers: theChinese Empire and Timurid Caliphate. The story narrated by the title is obviously invented, a sort of "what if”Of the events that took place in our past. In particular, the title begins with the reconquest of the Balkan peninsula, a region subject to the rule of the caliphate.

From here, the European Confederation will set out to conquer the most remote regions to the east. This will also lead her to clash with the armies of the Chinese Empire, during ainvasion of Siberia is unlikely for the times. The player will have to lead the armies submitted to the commander Tiberius, take control of the territories, settle there and face the opposing armies, up to bring the Confederation to total domination. 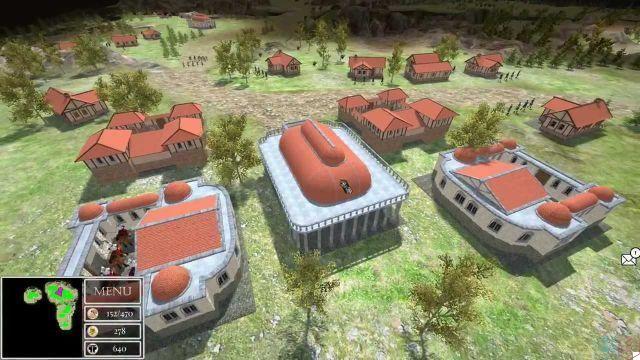 Many Ways to Make War - Taste of Power Review

The single player of OneOcean's opera also presents other ways, which will allow us to face different and even more pleasant challenges than Story mode. Art of war is a mode that will allow the player to become familiar with the title. The game will explain all the mechanics that you will have to face in the course of our games. All types of troops will be illustrated, divided into infantry, cavalry and special troops.

The strengths and weaknesses of each of them will be highlighted and illustrated and thanks to this the player will always be able to understand which troops to deploy and in what position. Art of War will also show us how to build, develop and manage the towns and villages under our rule. Survival, just as the name suggests, it is a mode that will see us busy resisting against various opposing waves. We will have to settle on a map, fortify our settlement and increase our war power to resist the ranks of enemies that will be sent against us.

showdown it's a very similar mode to Survival, but we're not going to face waves of opponents here. Our enemies will be perched in a city and will control vast portions of territory. Our task will be to wrest the map from the control of the opposing power, coming to conquer and destroy the enemy stronghold. 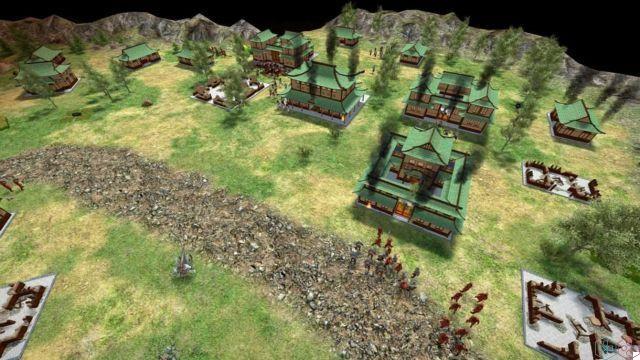 With the sole exception of the Story, all other single player modes are playable with the faction of your choice. At the beginning of each game, you can choose which of the three populations to lead to victory. It will be up to the player to decide whether to place himself in command of the European Confederation, the Timurid Caliphate or the Chinese Empire. Unfortunately, the differences between the three factions are very minimal. What distinguishes them lies above all in theaesthetics of the cities that will be built, in the names of the buildings and in the clothing of the troops.

The functions of the different architectures and armaments of the armies will be basically the same. The only element that will distinguish the factions from each other will be a type of special troop, unique for each side. There will be no impacting differences therefore not even at the level of strategies that can be thought and implemented to get the better of the opponents. This is one of the defects that are felt most in Taste of Power and that seriously affects its longevity and replayability. 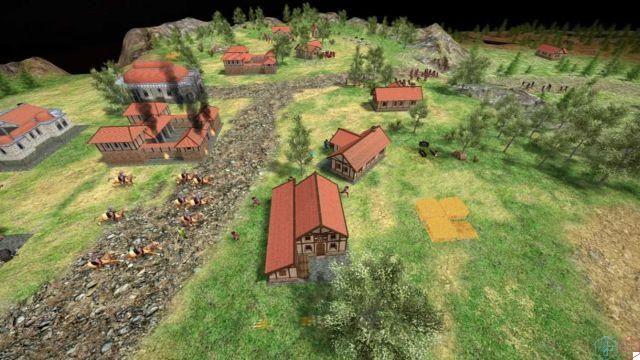 Even before moving armies and attacking, what is fundamental in OneOcean's strategy is the construction and management of cities and settlements. Among the activities that will involve the player, there will be theexpansion and construction of new buildings. Each structure has different functions. The CASE​ allow to expand the city population, so as to have more men available to replenish the ranks of their armies or workers to engage in various activities. The greater the inhabitants of our regions, the more money will be available, as the commercial and economic life of our domains will be more lively.

Le farms instead they will guarantee food for all of our subordinates. The other buildings, on the other hand, will be used for the expansion and strengthening of our army. Thanks to barracks, you can recruit and train all the different infantry troops. The forte it can be used to equip armies with cavalry troops. L'arsenal it will be needed to develop new tools, weapons and equipment for the army. L'academy and district of engineers they will be employed for the study and modification of light and heavy troops.

Le garrisons instead they will be our shield against enemy assaults. They can be built in any point of our territories, in strategic positions for the control of the map and supplied with archers who will pursue the enemy troops who try to attack us. 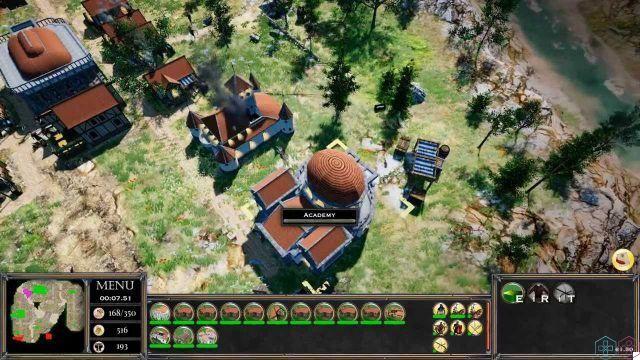 During our military expeditions, it will be possible control different types of troops. It will be up to the player to choose whether to move his army in a compact way or select individual groups to move more specifically or to attack certain objectives. The units available are different and are divided into two large groups: infantry and cavalry. These two large categories in turn present differences within them, based above all on theparaphernalia supplied to the different components. Troops can be used in different ways, depending on what type they are.

Every unit, whether they are archers, spearmen, mounted riflemen, has gods strengths against certain groups of enemy soldiers and weaknesses against others. It will be up to the player to learn about his army and units and make the most of it against opponents. It will be fundamental to learn how to manage your army well, exploiting the troops in a strategic way. In the game there will also be a tactical pause function, with which it will be possible to stop the game, but continue to give orders to your soldiers. 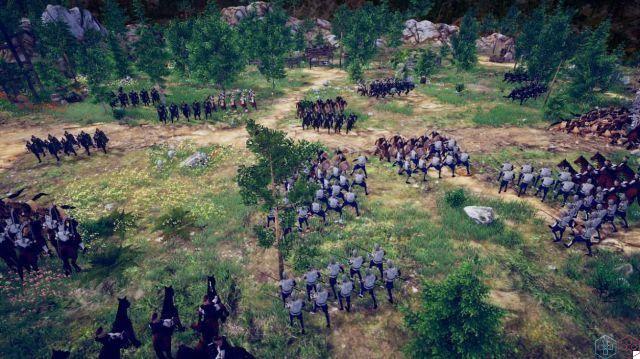 The title is not intended to narrate the history of the world in an interactive way. Indeed, the story that the single player mode offers us is a sort of alternative version to the one we all know. However, this should not result in a series of completely senseless choices, as unfortunately it does. The first point that leaps to the eyes of a lover of the subject is the total confusion that the developers must have regarding the weapons that were used in the early XNUMXth century.

At that time the i first arquebuses, huge rifles, more like small cannons, difficult to transport. Their usefulness was due above all to the fear they instilled in men and to the confusion and terror into which they threw animals with their thunderous explosions. However, in the game we have entire armies of cavalry equipped with rifles, clearly eighteenth-century in style and easy to handle.

But the oddities don't stop there. The Timurid Caliphate has immense ones among its ranks elephants. One wonders where the developers got this idea from. Not only have the troops of the Timurid empire never made use of these animals among their ranks, but they certainly would not have used them on mountainous and irregular territories such as the Balkans. A further oddity is the decision of the European Confederation of invade Siberia, totally inhospitable territory and of no strategic use in the historical period in which the narration is set. 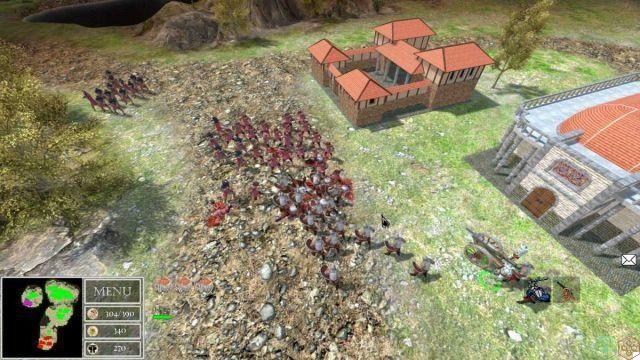 A strategy that does not convince

Taste of Power is undoubtedly a title that would like to leave a mark, but which does not fully succeed. Not only from a playful point of view, it is quite limited in the strategic options it leaves to the player. Also on the technical side, the OneOcean game introduces itself dated. The environments are anonymous and very similar to each other. The soldiers and men who will populate our villages are sketched figures, with very simple and woody animations. Also from the point of view of sonoro the game is lacking.

Il English dubbing is poorly done, many sentences are pronounced with excessive and unmotivated emphasis. The sound effects of battles instead they are confusing and antiquated. If you are looking for a quality RTS that knows how to amaze and captivate you, Taste of Power is unlikely to do it for you. The game fails to convince in any of its iterations. OneOcean's intentions to create a product halfway between innovation and classicism collide with wall of mediocrity.

The options left to the player, both in the development of the city and its economy and in the choices to be adopted in battle, are really minimal and of no real use. In fact, every game will end with the destruction of the enemy settlements or ours, if we lose. There are no other modes, such as the surrender of the city, elements present in the old Total War titles that this game would like to be inspired by.

This was our Taste of Power review. What do you think of it? Have you tried the game or did you intend to do it? Keep following us to stay updated on all the news from the world of video games.

add a comment of Taste Of Power Review: an RTS that doesn't convince