A queen to save and an epidemic to eradicate and more in Sword Legacy: Omen, the turn-based RPG set before the coming of King Arthur

Here we are to talk about Sword Legacy: Omen, title developed with the collaboration of Firecast Studio e Fableware Narrative Design. The game just came out on Steam it's an interesting one RPGs in turns with some interesting gameplay choices, set in Britain prior to King Arthur's accession to the throne. Let's see it together more closely in this review.

Sword Legacy: Omen and his history full of doom

Sword Legacy: Omen will take you to follow the story of Uther, personal guard of King Leof, who during a day of daily life had everything taken away. Uther witnessed the extermination of his city during an enemy attack and he failed to prevent the death of his king. The queen has been kidnapped and only thanks to the intervention of the court magician Merlin did the royal guard not end up like his king. If he wants to worsen the already well-seasoned situation, he thinks about it a mysterious epidemic that had started to hit the village. Your role is to bring vengeance to your kingdom, seek out the kidnapped queen and eradicate the epidemic.

A tough job even for the strongest of heroes but fear not, during your mission you will meet several characters who will be willing to help you and who will become part of your team. The plot though narrated in cartoon style it is really very raw and with the various twists it really manages to involve the player. 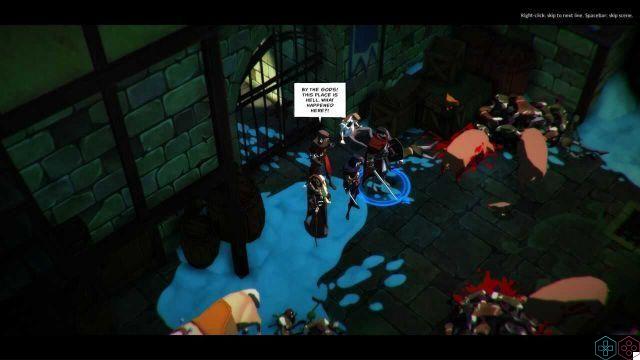 There are so many games that nowadays have too simple gameplay and that pushes the player to increase the difficulty, however Sword Legacy: Omen is not among them. The game follows the basic mechanics of classic turn-based RPGs but makes some really interesting choices that they'll make try hard even the most skilled strategists. The various characters that make up your team will each have action points that can be spent to move or use their skills. It must therefore be taken into great consideration where to place your team in relation to the enemies and above all to evaluate how and when to attack. Another aspect not to be overlooked will be the use of objects such as explosive barrels or crates. These items in combat can be a useful cover that will force enemies to spend points on moving or lethal weapons of destruction for both you and them.

Action points will differ from character to character and will be affected by your equipment. Still in terms of characters, everyone will have different statistics that will not be modifiable as they will not grow up with an experience system. However, in each fight you will be rewarded with points to spend to buy skills that will differ depending on the character's class. Among these we find a good dose of variety among wizards, archers, spearmen, thieves and monks. Yours team will therefore be very interchangeable depending on your game or needs. 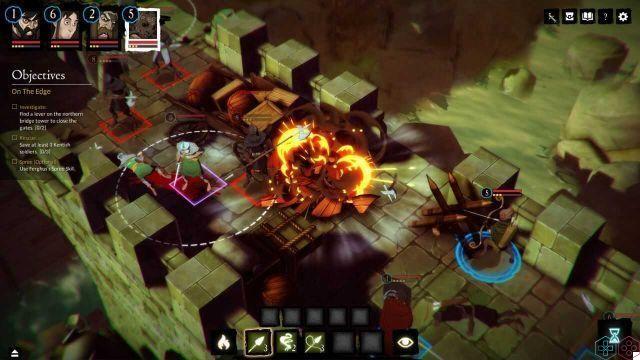 Sword Legacy: Omen between combat and exploration you will not be able to rest

Sword Legacy: Omen will take you wandering around Britannia and will do so by doing you explore towns and villages where you will have to investigate to achieve your goal. The level design is not very complex considering that the explorable areas have structures with two or three rooms on average and inside you can find some objects to interact with. The problem of any closed doors or locks on chests can be quickly circumvented thanks to the thief's skills. The game offers gods scattered throughout the maps checkpoint ove salvare and this will be the only way you can create a restore point.

A constant concern will be your health that unlike many other games you can just regenerate while resting. To rest you will have to go to a tavern where for a not so modest sum you can stay overnight and be safe, or camp outdoors with a special item but risk an ambush. This mechanic is really very special because on more than one occasion it will highlight thesurvival aspect of the game, a unique feature that distinguishes it. 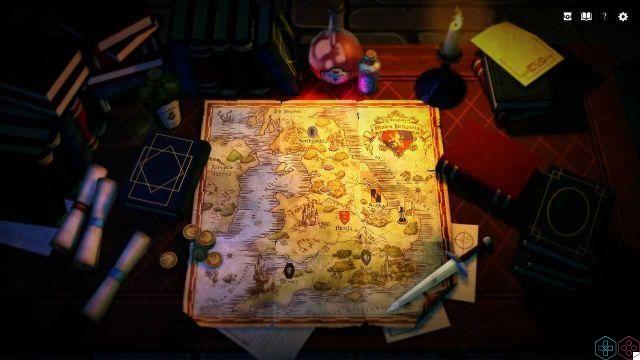 Sword Legacy: Omen is a very interesting title which however has some flaws on the final result on a technical level. The game is very light with cartoon-style graphics that still manage to express the raw plot well. Despite its simplicity, the title features a excessive complexity in terms of gameplay especially during exploration. Very often the game action comes slowed down by animations of interactions with objects or abilities that force you to wait for its end. The audio sector does not shine for beauty but it does its job, unfortunately the Spanish language is not supported. We are however talking about subtleties which however show how from the point of view of details the game has perhaps been a bit neglected. 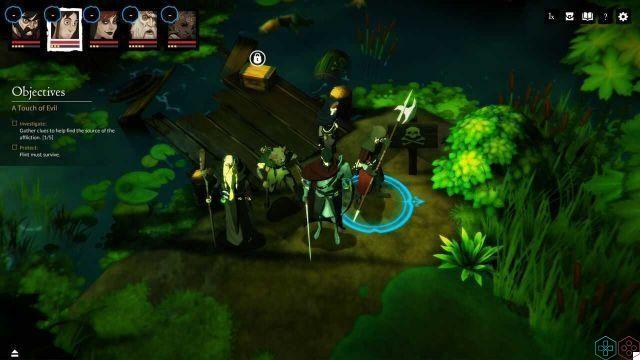 Sword Legacy: Omen is undoubtedly a game with an engaging narrative that deserves to be tried, especially if you love the genre. A title that puts all its attention on history and which does not provide other modalities but which manages to involve the player. The game is proposed as a Turn-based RPG but that thanks to its mechanics stands out from the mass. Some gaps in terms of graphics and event management, however, stop it from being a truly unique game.

I remind you that the Sword Legacy: Omen is available on Steam for € 17,99. We at techigames as always will be here to bring you the reviews on many new titles so keep following us.

Review Tales Of Vesperia Definitive Edition: the return of a myth? ❯

add a comment of Sword Legacy Review: Omen and Life Before King Arthur