Super Mario Party review: a return with all the trimmings

Super Mario Party returns to Nintendo Switch bringing with you an avalanche of mini-games and many other new features to be enjoyed. Are you ready to roll your dice?

When I bought the Nintendo Switch I immediately thought about when this chapter would come out. Like me, many have done it, especially after the good experiences of Mario Party played on the old consoles. Over the years we have seen Mario Party change in his being, from game modes to minigames. With Super Mario Party for Switch, however, we go back in time by giving space to the old ways and inserting new "applause".

Super Mario Party: the return to the old style | Review

A board, lots of colored squares and a nice die to roll. Super Mario Party returns to style "Goose game" where 4 challengers will find themselves competing against each other to conquer the ministelle. Toadette, the exceptional showgirl, will be waiting for us in a random place on the map; exchange your coins and get as many mini stars as possible.

Of course the work is based on Minigames and on the possibility of obtaining coins by winning them. With the old mode also returns the possibility to choose the turns to be carried out before the game ends. So ready and go! It is played in maximum 4 players, all Really or by adding the CPU. We would initially be thrown into the "Party Square", a square where we will find benches to approach to choose the mode to play. A faster way is to use the “Pad”, that is, a tablet in which all the modes and options of initial choice are listed. If you are not 4 players, first of all we will be asked to choose the opposing characters controlled by the CPU and the difficulty with which you want to play. 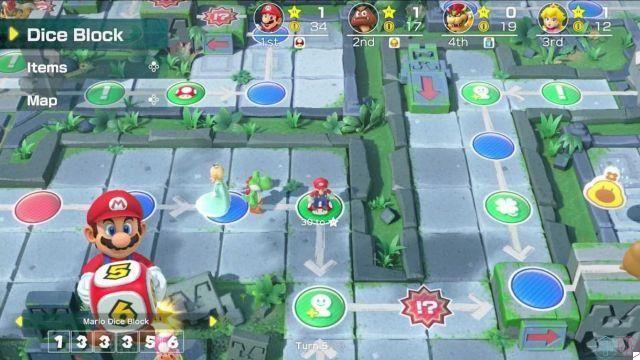 Super Mario Party knows how to excite and make people laugh, especially if played with friends. But he also knows how to do to compete, Between friends, With the CPU or with other players in the world thanks to the brand new Online mode. The sore point is the slowness of the game, which was lost with the last Mario Party. At the beginning we have to put up with words after words of the secondary characters that help us move in the game. Furthermore, the game itself is slow due to the type of game which, however, is made slower by the scoreboards that have little to tell us. Compared to the old games, you immediately notice the decrease of squares that lead to playing minigames and the growth of squares with a random outcome. The latter have their why, I'm not here to deny it. From the Bob-omba a Chomp, each board has its little tricks. Arrive on a square VSHowever, it seems very rare to bring the competition to mini-games at the end of the round, at least most of the time.

That said, the minigames are great. There are more than eighty, perfectly designed for the Joy-Con and truly competitive. As always, there are minigames to play everyone against everyone, 2vs2 or 3vs1. A further novelty is the presence of personal dice for each character. In practice, each character can roll either the simple die from 1 to 6 or his own personal die, for example Luigi has a die with three sides of 1, one of 5, one of 6 and one of 7.

Super Mario Party acquires an extra point thanks to the implementation of a particular box, the box "Partner". Whoever lands on this square will have the chance to get, at random, a companion (an unselected character from the game) who will give him the opportunity to roll his die and who at each turn will roll a 1 or 2 die which will accumulate at the our score. But do you know what the real news is? It will be possible connect two Switches together to be able to play certain minigames, overlapping them or using them on a plane, thus creating a path. 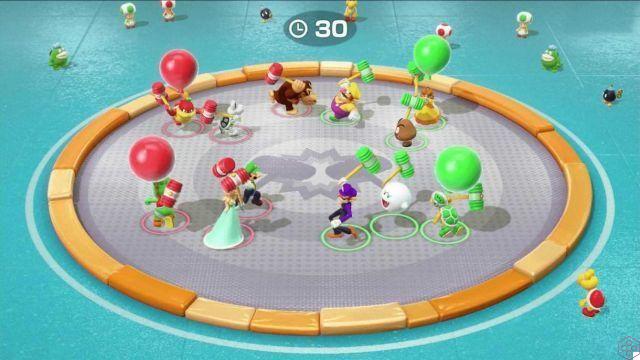 The news from Nintendo are always 5 stars, and those of Super Mario Party are no less. The first I want to point out is "Palco del Ritmo". It's a very slow game mode that gets hectic over time. We will find ourselves on stage performing a series of unique and exclusive minigames for this mode. The minigames will be repeated several times at an ever increasing speed leading the player to have to coordinate in the best possible way to get the cheers of the spectators Toad.

"Wild Waters" is the name of another brand new mode. Here the going gets tough and the cooperation between the players is essential. The game consists in simulating with the Joy-Con the movement of the oars since our characters will have to get off the to Apply until the end. Through obstacles and other mini-games, players will only come to an end by winning all games and overcoming all obstacles. Beware, because there is also another enemy: the weather! If it reaches zero the challenge will end without being completed. 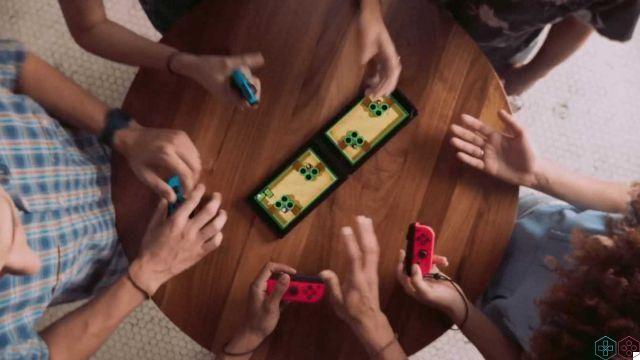 The latest modes available are the online one and the "Minigamecathlon". The first involves playing online with opponents from all over the world. This is the most sought-after mode by Mario Party players who, tired of having to play alone in some cases, can challenge anyone by remaining alone sitting on their sofa. Minigame, on the other hand, gives us the opportunity to challenge our friends or the CPU in one series of 5 minigames. The peculiarity is that everyone takes a score based on their score in the single minigame, which will add up in each round. In this way the score is given based on a score in the minigame, so not a simple +1 because you have won the minigame itself.

The new meets the old. Super Mario Party becomes an absolutely new game, which looks to the past. Many may turn up their noses for the classic mode, changed from the last Mario Party and reported as at the origins. Certainly something has been lost, but the originality of the game has been found, which perhaps had disappeared. Personally, I loved Super Mario Party 10 with its new game mode, maybe bringing the bosses back to the boards could be a point in favor of the new game. At least the other modes, the new ones to be clear, bring the smile back on the faces of all the players who expected everything except for such frenetic and competitive games. Super Mario Party is a great game in the company of friends, which with the new modes also becomes a way to relax by playing when you are alone.

add a comment of Super Mario Party review: a return with all the trimmings