Rebellion returns to console and PC with a completely crazy third-person shooter: it's called Strange Brigade and it's a lethal mix of adventure, mystery and lots of bullets. Ready to find out in our review?

Raise your hand if you know at least the name team Rebellion: all the others end up in detention for at least ten minutes, and lose the possibility of being able to play even just one of the countless titles they have developed over the years. Strange Brigade it is in fact only the latest addition among many diversified productions, most of which oscillate between action and shooter: but it is crazy like few previous ones. Rebellion, we mention it at least in passing, has developed titles such as Alien Versus Predator, Medal of Honor: Underground, Sniper Elite, Tom Clancy's Rainbow Six and Zombie Army Trilogy; perhaps in the latter one can glimpse one of the progenitors of Strange Brigade.

Strange Brigade at the moment can perfectly recover at low figures on 4 PlayStation, Xbox One and PC (it was not developed or converted for the Nintendo Switch); at the launch on the market, however, it was treated as a real triple A and was offered at a decidedly high price. In our review you will discover how perhaps this requested amount was excessive, but also how it is all in all a solid title in its mechanics, varied, and above all fun: one that always manages to tear a smile, the perfect title to relax with. without worrying too much about the consequences. Unless you have too much trouble slaughtering mummies with grenade launchers… crazy situations like this are the order of the day in Strange Brigade.

Explain how Strange Brigade works it is very simple and immediate, to account for the soul of production a little less; so let's go step by step, starting with the gameplay. Strange Brigade is one third person shooter / shooter in which a player or a group of two to four players must overcome a series of challenges to reach the end of the level; these challenges consist of pitfalls to avoid, more or less complex puzzles to solve, enemies on enemies to be eliminated and boss fights that are also quite demanding to complete.


If you are wondering whether or not it is possible to play Strange Brigade completely alone, the answer is yes: the main adventure, the challenges and the secondary objectives are all accessible even to those who play alone; eventually the number of enemies and the level of difficulty increases if there are two or more players in the game (but nevertheless without ever being inaccessible). 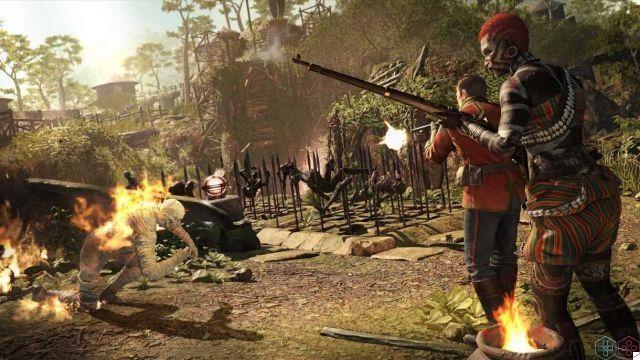 Strange Brigade is articulated in two main game modes: the adventure and the challenges, both available both online and offline; for fun at the highest levels we recommend that you have a couple of friends or play online with complete strangers. The main adventure consists of nine chapters so one afternoon is enough and left over to bring it to an end; after all, the philosophy behind the title does not change much, even dedicating itself to the other offers proposed.

Strange Brigade only ever requires you to do one thing: open fire on the enemy and groped to get away with an adventure. The adventure itself represents the heart of the production: four unthinkable travel companions live for the day trying to obtain treasures upon treasures, or at least to save their skin from danger; danger that almost always takes on the dimension of the supernatural in Strange Brigade.

Strange Brigade is a completely crazy title, where mystery adventure and bullets come together in a perfect triptych. Have you ever seen dungeons full of zombies pirate, or Egyptian mummies, or armored minotaurs? Gigantic stone balls rolling overwhelming piles of African hell spirits? Well, these are just some situations proposed by the title of Rebellion, and also the more normal and less weird to be honest.

Not that the four main protagonists are any less crazy: we note in passing the presence of the African demon hunter, the warrior, the explorer and the expert in the occult. Each of them owns a weapon or skill main weapon (very powerful, but with limited bullets) and a secondary weapon or skill (less powerful, but with infinite bullets). It is up to you to choose your preferred play style.

In general theparty balance it is not so fundamental: once you are prey to the hordes of monsters that arrive on the screen you forget which character you are using, anything is fine to clean up your enemies, or be eliminated at least by trying. Of course, perhaps a few more characters would have helped to vary a little the gameplay and the proposed situations, even if we don't really feel the need to complain too much: the touch of the Rebellion is evident in the level design and in the goodness of the firefights, he manages to make what at first glance might seem a confusing title a very interesting production.

The same goes for the technical sector: we tried the Xbox One version of Strange Brigade and we see an optimization that was only partially successful on consoles, for what is clearly a title designed, developed and tested mainly on PC. Too bad, because we are sure that a large amount of copies will be sold on PlayStation 4 and Xbox One, and we do not even exclude the possibility of a future conversion on Nintendo Switch.

Strange Brigade is a frantic and delusional shooter, funny and with absurd situations, able to offer the right amount of fun whether played alone or in the company of friends. Four characters, many weapons, supernatural abilities and simply unthinkable enemies are enough and advance for about twenty hours of play (or even more) spent in complete carefree; those who want to try their hand at increasingly complex challenges and hordes will also find bread for their teeth. The console optimization isn't perfect, but it's also the only real flaw we feel like pointing out: everything else is extremely pleasant. Rebellion strikes again.

7.5 A solid and fun shooter

Review Stygian: Reign of the Old Ones, un’ode a Lovecraft ❯

add a comment of Strange Brigade review: adventure, mystery and lots of bullets