Storm Boy Review: When Words Are Not Needed

Storm Boy is a Blowfish Games title inspired by the story of the Australian writer Colin Thiele: here is our review

Storm Boy, developed by Blowfish Games, is inspired by the 1964 short story by the Australian writer Colin Thiele which was very successful right in Australia, especially among children; in addition, a film inspired by Thiele's story is also on the program. A story that certainly gives great space to reflections and emotions: let's see how these features have been reported in the game.

Storm Boy from the first minutes of the game looks like a title very inspired and emotionally engaging: we have a little boy who lives on a beach on the south coast of Australia, in full contact and respect for nature. Almost in a manner "Paranormal" the surrounding nature, obviously composed of flora and fauna, seems to recognize this respect and this shrewdness that the Storm Boy has towards him and reciprocates all this by seeing in him a friend of whom to be able to trust and to whom to entrust even one's life.

In fact, the story "begins" with the finding by the little one of 3 pelican cubs, Mr Proud, Mr Ponder e Mr Percival. The latter will be the one that will need more care and that, unlike the first two, reached a mature age will not abandon the Storm Boy. Mr Percival will establish a beautiful and fraternal friendship with the boy, capable of giving a strong emotional charge that will accompany you throughout the course of history and narration. Narration that in my opinion exceeds in the use of superimposed texts, which risk diverting the player's attention from the landscapes and situations that you will find yourself admiring and "to live" during the course of the game. 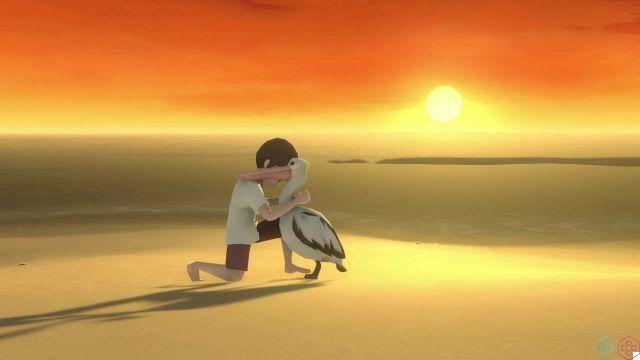 Storm Boy presents itself as a side scrolling game (more precisely as a narrative adventure) in which you will find yourself guiding your character along the coast of a southern Australian beach. Your experience will be "interrupted" by a series of minigames that you will face, 6 specifically. The first consists in having to look for shells in the sand, digging in certain points, The second one in feeding Mr Proud, Mr Ponder and Mr Percival by throwing fish into their great pelican beaks.

In the third minigame, on the other hand, you will find yourself together with Mr Percival on a raft to wander in a limited portion of the sea, with the possibility of diving and diving underwater. On such occasions it is possible to admire the beautiful work of Blowfish Games in the creation of the seabed.

Fourth minigame is in my opinion that more interesting of all. You have a part of sand on which to draw using a sprig and it is also possible to attract a wave to cancel your work. Precisely this situation makes the game's main target audience perfectly clear to us: Storm Boy is an excellent gift for a child who approaches the gaming world for the first time.

Finally we have the last two minigames, the fifth which consists of throwing a ball at Mr Percival, waiting for him to fly towards it and then bring it back to us while in the sixth we will find ourselves doing a slalom in the bushes, sliding on the dunes using a piece of cardboard found on the beach.

Storm Boy on a graphic level looks like a very inspired title: graphics cartoon in some ways it recalls RiME, although it does not reach the same stylistic figure. The sound is very interesting and engaging, in the background we will always have the sea ​​waves to accompany us during our adventure and also to accompany an excellent one colonna sonora, simple but very impactful and perfectly capable of adapting to the situations that the game will present us.

The movement system is quite fluid even if in some points, in the water for example, it could be managed better: in fact it happens that our character freezes and that it does not respond fully and instantly to our commands. For what concern frame rate, is very stable: given the limited polygonal quantity, it was a must. The technical caliber is not high, therefore, but it does not have to give you the idea of ​​a title that is not well cared for on a visual levelIndeed, the simplicity of Blowfish Games' work makes Storm Boy a real pleasure for the eyes. 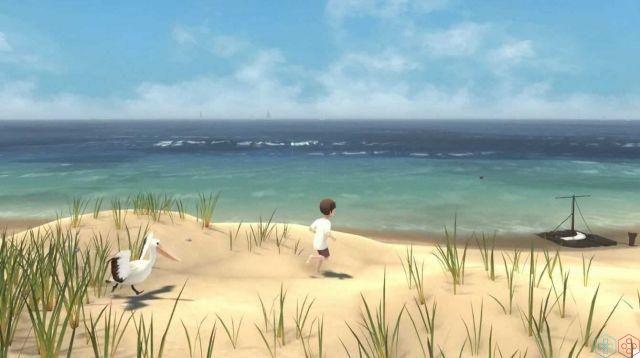 Having reached the conclusion of this review we can say that the passion of the team shines through in the work of Blowfish Games. However, it is necessary to approach it with great caution, considering that we are still faced with a very short, straightforward and simple title: we will certainly not be able to relive the plot of the story one by one by Colin Thiele, but it sure manages to to communicate the values ​​of friendship and respect for others (perfect for a child) that the writer presents within the text.

add a comment of Storm Boy Review: When Words Are Not Needed