Starlink: Battle for Atlas is not only a game but it is also a toy: let's find out all the details in our review

Within the videogame market there seems to be a constant: in the chaos of (increasingly) digital products, where all that matters is "inside the TV and inside the console", in the end it will always return the passion for plastic. Not random plastic pieces, of course, but models and figurines, objects that want to become (and in some cases succeed successfully) of the collection, but which at the same time are fundamental for our gaming experience.

Even without going too far back, let's think of Skylanders, Disney Infinity, Amiibo or Nintendo Labo, which replaces plastic with cardboard, but rises above the same concept. Now Ubisoft is also taking on the challenge with a brand new space-themed IP: Starlink: Battle for Atlas.

Let's find out what we think in our review. 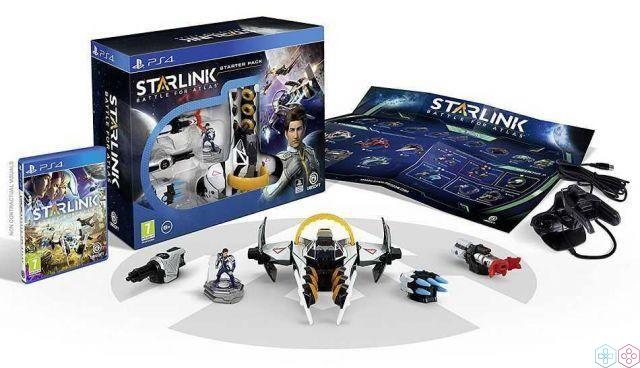 Before the video game | Starlink: Battle for Atlas Review

Playing Starlink: Battle for Atlas, as you may have guessed, even starts before the game starts and, for some, it could even continue with the television off. Ubisoft's work is built (literally, for once) around the model of a spaceship, to which a pilot and two weapons are added. Through a special dock, we must assemble these components to form a working spacecraft: the dock must then be connected via its cable (more than two meters long) to one of the USB ports of the console and must then be hooked to the controller.

The spaceship consists of the cockpit on which there are two sockets: you will find the wings already mounted on the sockets, but it is possible to detach them to replace them with those of other spacecraft (sold out of the Starter Pack). You can also use a spacecraft without wings (both for aesthetic purposes and for play purposes) by attacking the weapons directly, or you can mount other wings on top of those already connected (up to a maximum of three per side). In the end, however, you will have to assemble the weapons, the real focus of the play experience.

The models of weapons and ships are well made and very solid: we admit that we have spent several minutes contemplating them and, among fans of the genre, we are convinced that they can easily become small collectibles. The characters, on the other hand, are less intriguing, both because they are small (and the details are therefore affected) but also because they end up hidden inside the ship's cockpit, making them invisible and, to be honest, uncomfortable to remove (a small child will never make it alone).

Comfort, in fact, is an element that should not be underestimated: Starlink's idea is that the player can (and will) change any component at any time. Mainly, we will have to replace the weapon - there are three of them in the basic package - in order to adapt our offensive tactics to the situation. The disassembly and assembly of the weapons is quick and easy but above all it makes the experience more physical and fun. For this, we would like to recommend the immediate purchase of an extra weapon pack (two weapons per package, base cost € 15). 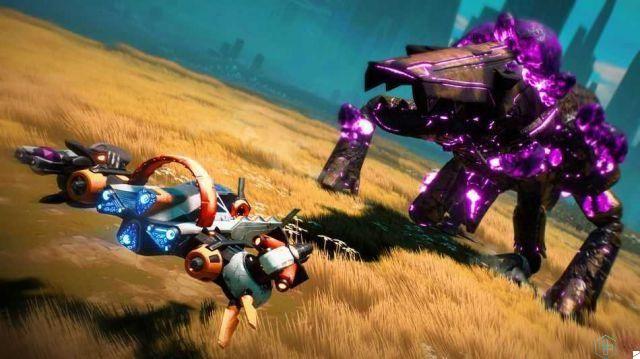 From the real to the imaginary | Starlink: Battle for Atlas Review

As soon as you are properly armed, you can throw yourself into the space epic of Starlink: Battle for Atlas. The plot sees a group of explorers (mostly human) who reach an alien system, Atlas to be precise, and are attacked by a religious sect in search of the Nova, a super source of energy that the leader of the Starlink expedition has been in. able to refine. The plot follows a fairly overused pattern and it's more of an excuse to move characters from one planet to another. Objective, among other things, achieved in full. Pad (and spacecraft) in hand, our task is to fight a robotic invasion and defeat the leader of the Sect, but to do so we must free the six planets of Atlas.


Within a sandbox structure, we find an extremely dynamic and content-packed third-person shooter, albeit repetitive. Each world asks us to do the same things: destroy enemy positions, take down the boss and build allied positions that supply us with electrum (one of the game coins) or that defend the planet in our absence.

The game, in fact, remains alive even while we are away from one of the six worlds: the enemies have a simple but effective hierarchy that asks us to return regularly to the visited planets, especially if we have not placed sufficient defensive armories. In practice, in the second half of the game the opponents will have spaceships that send the Prime to the planets, huge bosses that create the Extractors in their passage, or structures that make normal enemies spawn. Each element makes the next stronger: shooting down a spaceship with the Prime active and enhanced by the Extractors is crazy, much better to start with the latter to make our life easier (or even not, if you want to increase the challenge: We assure you, however, that powerful enemies can give you several headaches). 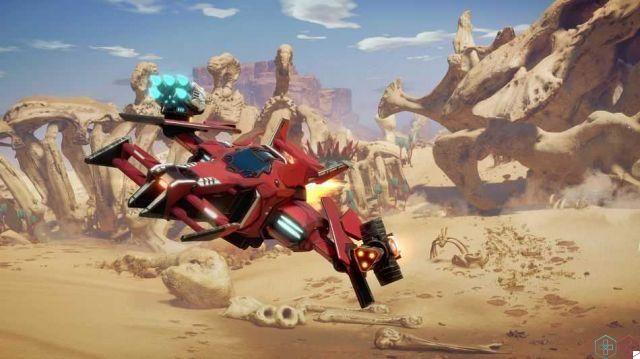 In the midst of all this, we will have to collect mods, upgrades for the cockpit and weapons. The power ups are not total, that is, we will always have to decide what to prioritize: do we prefer to be fast and agile in curves and stunts, or do we prefer to be resistant and with a lot of energy to shoot longer? At any time we can vary the cards on the table to adapt to the situation.

On balance, Starlink is a "set of situations", a long sequence of side missions, of small tasks (take that down, get this back, go there and there ...) that take a few minutes to solve but never seem to end. How negative this is also depends a lot on everyone's tastes, but we can assure you that inside all of this there is a fun shooter at all times. Whether we are on a planet, fighting at ground level shooting, leaping and somersaulting in the air, or floating in open space, hyperdrive interrupted by a raider space trap, Starlink does not tire.

The pace of the battles is high, the excellent cartoon-like and colorful graphics make every fight spectacular and the whole work prompts you to say "one more mission and then I turn off". It also helps that you can press a button to be pointed to the closest secondary objective (which on balance is primary) closest to, to knock down a station or get an upgrade without even having to open the map. The little ones will have a lot to do and the older ones could raise the difficulty level to get involved in epic sci-fi battles.

The work can also be played 100% digitally (and in this case you have more weapons and ships, which is useful for playful purposes), but it certainly loses some of the charm. This is the focal point of Starlink: while sinning with a certain repetitiveness and a certain simplicity for mechanics and narrative, the work has charm and fun. The models give it that extra touch and the frenzy of shooting everything and collecting everything does the rest. Starlink: Battle for Atlas is a very interesting first step and we are curious to see how it will evolve.