The marathon of the ants is about to start, but lurking there are the three spiders Roberto, Carlo and Cenerantola ready to hinder them. Find out how to help ants get to the finish in the Spinderella review

Great day in the undergrowth, the ants divided into four teams to be able to challenge each other during the International Ant Marathon. Unfortunately, however, there are three little pranksters lurking called Roberto, Carlo and Cenerantola, whose favorite pastime is to frighten the poor ants who in this case run the risk of losing the race. 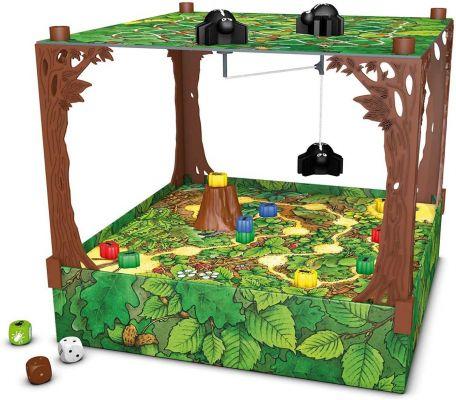 First of all let's empty the bottom of the box well because it will serve as a basis for our game. We choose which side to use of the ant board, if the one with the shortest path or the one with the longest path, and let's put it on the box.

Now we need to place the four trunks on the sides of the box, place the spider web board on top and secure it with the four snaps.


The spiders Roberto and Carlo are placed close together on top of the spider web board and on the lower part, immediately below them, the two magnetic suspensions are positioned. The suspensions allow Cenerantola to go down or up every time the other two spiders move.

We choose the teams that will compete in the race and put them on the starting square, finally we place the trunk on a square of our choice.

The setup is complete and we can start playing. The first thing to do is to place Roberto and Carlo each on a red point of the web board (the distance between them must be two red points) so that Cenerantola remains well raised from the base board.

You choose the first to play and continue to play clockwise.

During your turn, all three dice are rolled. To know which piece devo move you have to watch that image she's gone out south green die and there can be three types of results:

Cenerantola has caught a prey

Cinderella can catch an ant if the brothers manage to lower it low enough with the web thread. In case there are several ants on top of each other, she will always and only take the one that is on top.


If Cinderella catches an opponent's ant, then we can move one of our own. If, on the other hand, he catches an ant from our team, we should put it back on the starting square.

After the capture Roberto and Carlo go back to distance themselves by two red dots so that Cenerantola can go back up.

End of the game | Spinderella Review

The game ends when all three ants of a team reach the finish line, the winners can be more than one if other players also manage to get all their ants to the finish square.

What do I think of Spinderella

Spinderella is one of the most beautifully setup children's games I've seen so far. The projecting upwards of the board, Cinderella who can go up and down hanging from her web are two factors that make this game not only beautiful to play but also beautiful to look at.

The only point against Spinderella is the regulation. In fact, the basic rules are three and they are the ones that explain how to move the various pieces of the game, but then they branch out into many small clauses (if we can define them so) that perhaps are a little too many to be able to keep in mind for children of 6 years that probably find themselves in front of a board game for the first time.

To understand how the game works and the movements of spiders and ants, I suggest you see Miss Meeple's tutorial, available on her YouTube channel.

add a comment of Spinderella review: keep away from arachnophobics