In this review we were able to analyze SpellForce 3: Fallen God, the second standalone expansion of the famous series developed by Grimlore Games

SpellForce is a series known for pioneering the genre RPG-RTS hybrid, starting from the excellent basic concept provided by Warcraft 3. Considering that we are today in front of the second expansion of the third chapter, it is clear how much the gameplay has been refined and evolved many times and the narrative bases of its world decidedly expanded. However, in order to enjoy Fallen God you will not need any prior knowledge in this world, however much it is recommended for a better understanding. So let's proceed with ours SpellForce 3: Fallen God review, a standalone expansion available on PC.

The evolution of a niche genre

SpellForce was born in 2003, a game developed by Phenomic that managed to carve out a passionate audience from this unusual mix of genres. In 2006 they developed the sequel called SpellForce 2: Shadow Wars, which continued to expand the series' lore and gameplay. Unusual for many games is the fact that, luckily for him, the title has received expansions for a long time with Demons of the Past released in 2012, largely thanks to THQ Nordic's acquisition of the series. After releasing the third chapter in 2014, and the Soul Harvest expansion in 2019, we are now able to play it second expansion. So let's proceed in this review by analyzing SpellForce 3: Fallen God. 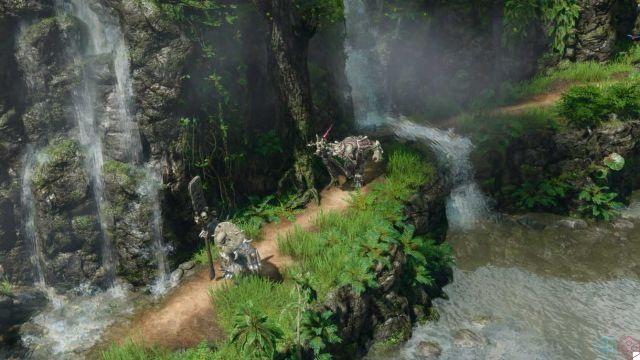 Trolls are a barbaric civilization, but to some extent surprisingly civilized. Although many of them have problems speaking, reading and writing, it is undeniable that we are not faced with a mere stupid race, which has never seen technological and cultural advancements. Much of this thanks to credible leaders who have positively influenced the peoples. However the head of the Zannadiluna he died recently and his tribe is becoming more and more unstable, therefore Akrog, his family member, is determined to take his place. The passage ritual happens positively, but the festivities are soon interrupted by the Troll hunters, a different faction that has been stalking them for too long and is leading to ruin.

After rejecting them and suffering heavy losses, we discover that a foreigner is willing to reveal to us the way to avoid an inevitable future defeat. In fact, one would be buried in a distant temple fallen deity waiting to be brought back to life. Akrog, aware of the insane proposal, agrees to embark on the journey and do the necessary to resurrect her, and eventually obtain her goodwill. 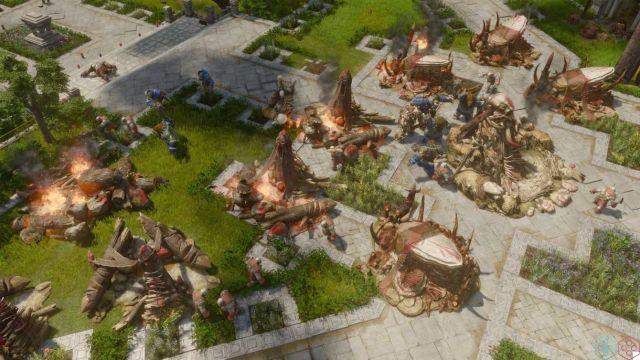 The new Moonfang leader will not be alone in this quest, they will also travel with him Zazka, Grungwar and the young man Noah Blood of the Moon. A party of four characters full of personality and who will often be able to give us some nice joke or pearl of wisdom. To deepen our knowledge of the world even more, we have the opportunity to talk to many characters and interact with them by engaging them in long conversations. In this way we got to know the social structure of the trolls, the relationship with other races, making such an in-depth breed particularly interesting (or even just played) in the world of fantasy.

All this to fuel the game's powerful RPG vein, made up of different outcomes based on multiple choices in dialogues. Often we can in fact decide to press more on the ferocity of the trolls, killing and looting. Or seeking as much as possible a dialogue with the interlocutors or enemies, sometimes guaranteeing a peaceful outcome to the missions, as well as obtaining different treasures (for better or for worse). 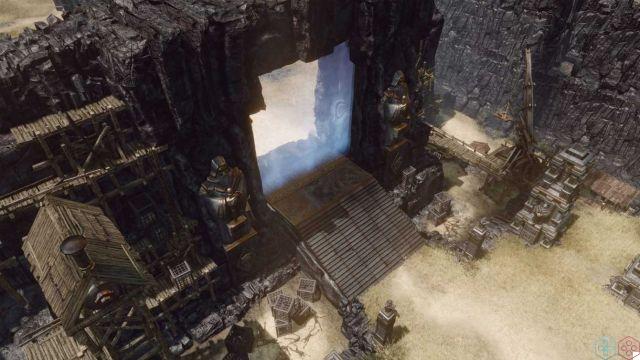 A character that evolves with the story - SpellForce 3: Fallen God review

Closely related to this component of the game is Noah Sangue di Luna, a troll who is on a journey of this magnitude for the first time and still has a lot to learn about life. The choices we will make and the conversations with him, they will lead the character to form differently. If we decide to be ferocious, so will Noag, directly influencing the skills he can learn and some of his important interactions.

This young troll is in fact the only one whose class we cannot choose in the screen character customization before starting the campaign. Of the other three it is possible to do it, but of all we can, within certain limits, modify their appearance. In fact, they must necessarily keep their build, but leaving us a way to change the skin colour, type of fangs, tattoos e hair. Don't expect a powerful customization tool, the options are just enough to keep you entertained for 10 minutes, something quite different from Baldur's Gate 3.

The RPG component of SpellForce 3: Fallen God also extends to the possibility of equip our party of four. Finding hidden treasures or getting loot from enemies makes it easy to get hold of new equipment. However, often the inventory will be filled with tools that we cannot use (mostly weapons and armor of other races), to exploit them we will have to bring them from blacksmith and dismantle them for new resources. In this way it is as if we have earned money, which we can spend to buy weapons and armor that are right for us. 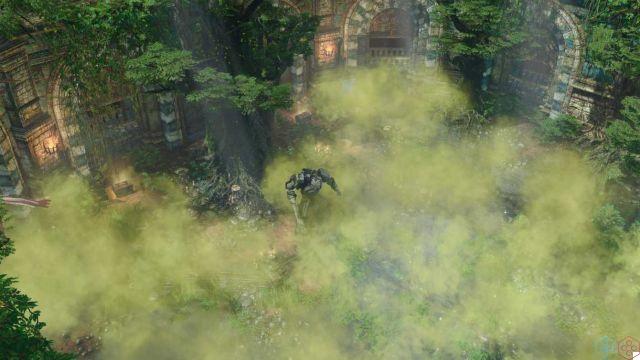 But don't think you're only bringing the heroes with you as you try to progress through the game. SpellForce is also a strategic video game, one of the very few hybrids of this type. Alternating with more linear missions where you can truly explore freely as if it were a normal RPG like Diablo or Baldur's Gate, you will also need to set up a base to grow a mighty army.

The system is absolutely identical to a normal RTS, but with its own small uniqueness. At the start of the game you will automatically have the headquarters and the working units will transport resources, build buildings or tear them down. For example, by selecting the parent company, you can order the creation of two types of units, one from the ground and one from the ground. To make them more powerful, you can unlock passive upgrades or send them to training.

When they come out of the "gym" they will have changed appearance and got a generous boost. As typical of the genre you will be able to choose different approaches against the enemy, you can decide whether to focus on greater defense while waiting for the right moment, or to insist with sudden attacks. It all depends on you. However, keep in mind that Only Trolls can be used in the single player campaign. 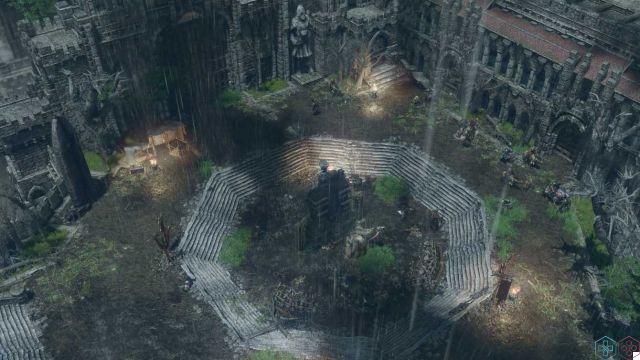 In terms of variety between the genres that make up SpellForce 3, a good balance is offered with each mission and map that will be able to give you different experiences. In one we interacted with an independent city of humans, being able to choose whether to plunder them or entertain a dialogue with them. Another time we headed into the desert to defend a Troll camp from constant waves of Elves, so we had to broaden our borders by conquering enemy terrains.

In the jungle we had to wipe out the troll hunters, or we explored an abandoned temple with the group of four. The variety of gameplay is therefore not lacking absolutely, despite being a standalone expansion. SpellForce 3: Fallen God also features one 1 vs 1 multiplayer mode (casual or classified), nothing really innovative as it will be you against the opposing base, but it is certainly an appreciated feature since you can use all six races available: Orcs, Humans, Elves, Dark Elves, Dwarves and Trolls.

You can play online with automatic matchmaking or against an enemy computer controlled. No other modes are currently included, but the developers plan to release new ones in the future. In the meantime, you can have fun with the modding as the developers have enabled support with the Steam Workshop. 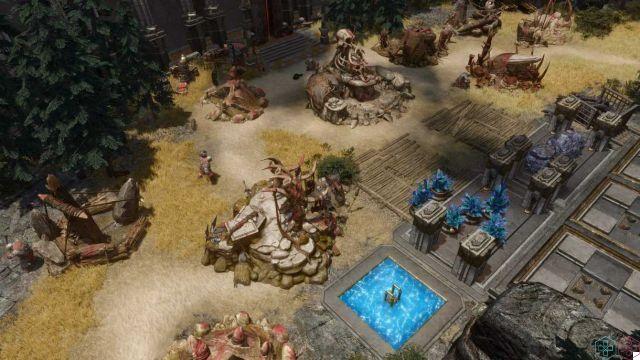 Although the game is suitable for users who already know the genre, we believe that the tutorial and the interface are not as explanatory as they should. If we were to put ourselves in the shoes of a novice to the strategic genre, we would certainly find it difficult to understand at times what our task is, but especially how to do it. Accomplice is too confusing interface (more than in the past) which fails to give some basic information.

Sometimes we are not told why a base is on standby, or why a unit is not being produced. You may find an X or three Z above the building, but not the reason. Sometimes, however, the user interface is so full of decorations and details to be done lose focus about what is really useful or important. From the aesthetic point of view, however, we are faced with one of the most beautiful strategic games with a top view on the market.

Shadows, lights and textures create the right atmospheres accompanying the adventures of the four Trolls. The hardware is not exaggeratedly stressed either, so you should be able to play Fallen God with even a low-end PC. The audio is good and the dubbing on the other hand is well done although in the long run it could definitely tire reading or hearing about Slightly ungrammatical trolls (voluntarily). 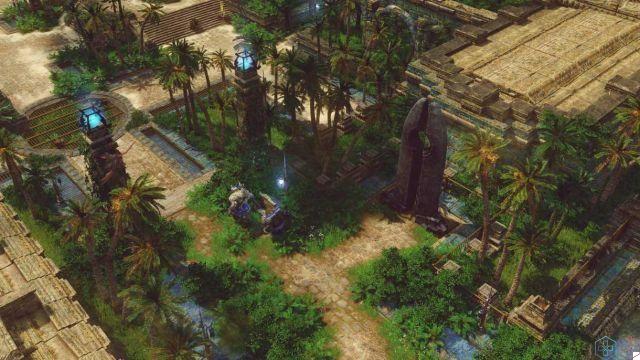 SpellForce 3: Fallen God is certainly an interesting video game, which doesn't reinvent the formula, but adds narrative depth to a generally mistreated race. Very interesting is the implementation of Noag Sangue di Luna, a character who evolves based on narrative choices taken from his traveling companions. So don't expect overly improved gameplay, right a "more of the same" well done and satisfying. We are sure that you will have fun in multiplayer too, but a little less if you are new to the series and you will have to deal with a confusing and uncommunicative interface. Finally, we definitely recommend the game to fans of the SpellForce universe!

The game of this review SpellForce 3: Fallen God, is available today on PC. We advise you to continue following us on techigames to stay updated on video games and technology.