Find out in our review how good is the (triple, but actually double) offer of Space Invaders Forever on Nintendo Switch

Under the sign review di Space Invaders Forever, if we had to describe it in two words, it is simply "off course". We had some glitches in the evaluation phase, but not in the writing. We could explain the situation by using the example of Hitman HD Pack for Xbox 360, since at the writing of the article (December 18) the question remained unresolved. Overall, however, the package includes three different titles from Taito's XNUMX-year franchise.

In this case, this is a Space Invaders Extreme, previously seen on the Nintendo DS, of the multiplayer title Space Invaders Gigamax, and the only sore point of this critical analysis: Arkanoid vs. Space Invaders. Before continuing, we remind you that the compilation was edited by ININ: “maybe you will remember them” for our recent review of Umihara Kawase Bazooka !. It will be a shorter trip than usual, thanks to the structural simplicity of the shoot-em-ups examined, but nevertheless we will evaluate what is put on the tray from the collection for what is there. 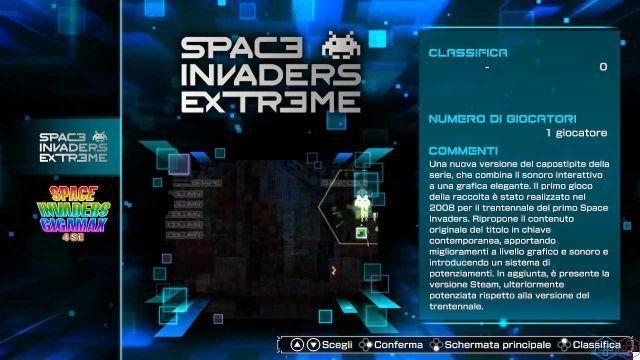 We were a bit caustic in the opening of this review, but if you look at the main menu of Space Invaders Forever framed above you should understand why. In short, even after entering the download code, the Nintendo eShop explicitly alludes to the presence of the third game mentioned, the crossover with Arkanoid, but for reasons that elude our understanding to date. the title continues to disappear. As far as this scribe is concerned, this is an entirely unprecedented situation.

Even after numerous (and unsuccessful) attempts to update, the game is stopped at the "vanilla" version, or the 1.0.0. We took the time to investigate the situation by contacting the forums and the publishers themselves. The first assert that this problem involves only the digital version, while the publisher has reassured us about a future patch. After much hesitation, we concluded that waiting any longer would be a disservice to whoever provided us with the code. Contrary to the recent review of Kingdom Hearts: Melody of Memory, all screenshots in this one were taken in a fixed version. 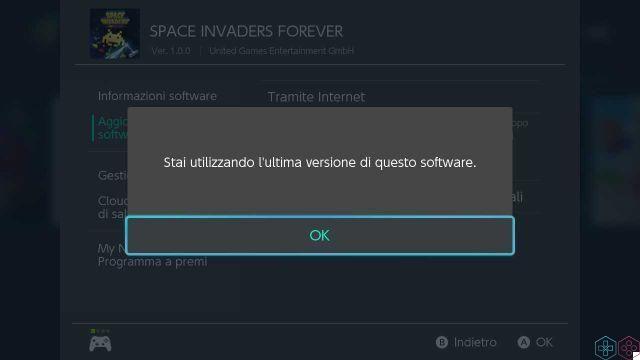 Let's start, following the order of the aforementioned main menu, from the first stage of the Space Invaders Forever review. Without too many words, Space Invaders Extreme alone he holds the whole shack upright. The game has barely aged a day since its explosive Nintendo DS debut. Extreme discards the gameplay of the progenitor of the series in favor of a quick, functional and adrenaline-pumping shoot-em-up. Our aim is always to move our spacecraft left and right and take down the sprites of cosmic invaders, but in a much more fluid way than the 80's cabinets have accustomed us to.

To pepper the basic formula they provide power-up to be collected (and distributed profusely), flying saucers at the top of the screen to be intercepted on the fly with well-placed and even imaginative shots boss that will test everything we have learned in the level before allowing us to move on to the next. During the various regular levels, smaller bonus scenarios occasionally catapult our spaceship into quick challenges to rack up points with. These will collapse to zero if we finish the level even after having exhausted our lives, and it must be kept in mind given the dependence on the score for the crossroads in Starfox style between levels. 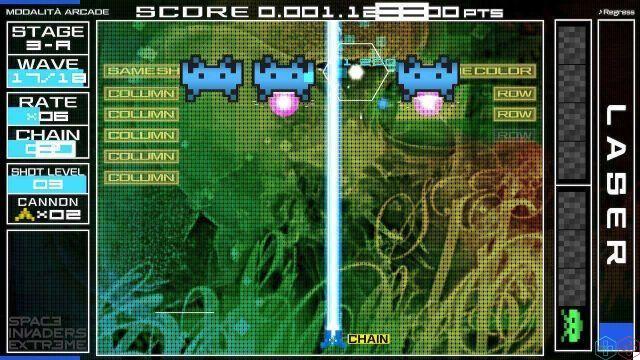 We may already be switching to Gigamax, but we'd rather stop the Space Invaders Forever review to talk about the look and feel of Extreme. Compared to the original on the Nintendo DS, the move to HD doesn't seem to enjoy any revisions artistic style, which expertly mixes sprites and psychedelic light effects. The disclaimer that precedes the title screen reminds us that this could strain the most sensitive eyes, but for the luck (and joy) of those suffering from photosensitive epilepsy one of the visually more "aggressive" aspects can be smoothed out easily.


We allude to dynamic backgrounds, which as on the Nintendo DS here too consist of abstract cinematics accompanying the action. This effect still attributes to the game its strong identity, innovative but never revisionist, but we admit that in the longer sessions our sight could feel at least under strain. Thankfully, the Space Invaders Extreme options allow us to disable the movement of the backgrounds, both in the main arcade mode and in the free play. The latter consists of a free selection of the individual levels, if previously unlocked. 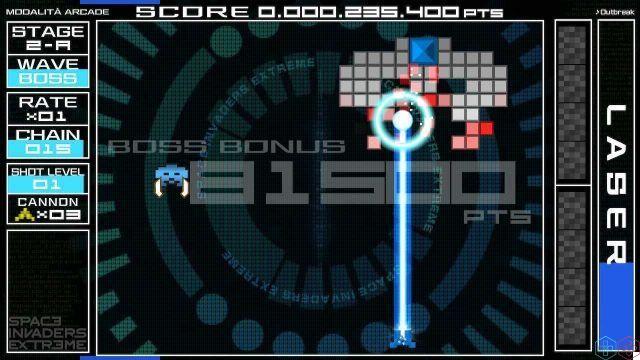 You are the co-op - Space Invaders Forever Review

At this point of the review, we can pass the baton to the second (and, we remember, the only one left) game of Space Invaders Forever. In fact, of Space Invaders Gigamax not much to say: imagine a widescreen version of the original game e increase the number of players from one to a maximum of four. But perhaps even this description is reductive: this title is not affected by a lethargic rhythm exactly as the debut of the aliens of Taito, without at the same time enjoying the "young" frenzy of Extreme. A good compromise, as well as a must for a bit of local co-op.

We weren't lying when we talked about the widescreen version. In reality, Gigamax is comparable to the marriage between the historic shoot-em-up series and the principle of communicating vessels. And it is clear that a similar experience is better enjoyed by the maximum number of players, but even trying it in two have emerged more than valid gameplay ideas. As in the very first episode of the saga, here too we must destroy the alien threat before it does the same with the monuments. The ground to cover is so much, perhaps too much to make the experience usable in single player. 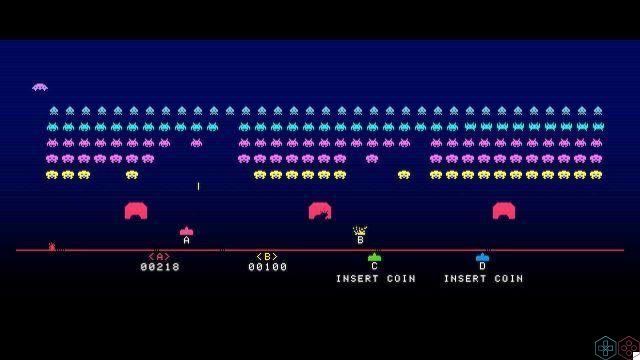 Here too, however, we have other ideas aimed at rejuvenating the formula a bit, starting with boss. Being a gameplay much closer to the original, that of Gigamax makes these optional clashes much less immediate than what we have seen in Extreme. The other highlight of the game, aimed at smoothing this edgy corner, is the ability to combine their attacks. This not only makes bosses suddenly more digestible, but it further incentivizes local multiplayer. Too bad just for the start intricate of matches, which simulates the insertion of coins.

However, we would like to dedicate a short paragraph to Arkanoid vs. Space Invaders, the great absentee of today. The game made its smartphone debut out of need for input. As the crossover title suggests, our weapon against aliens is Arkanoid's virtual racket. The result received the most disparate praise from mobile users, but as you have seen above it was impossible for us to talk about it in the analytical and critical context of a review (although we will be happy to dedicate to the game a posthumous evaluation apart from). The latter has also told you everything you need to know; we just have to move on to our conclusions. 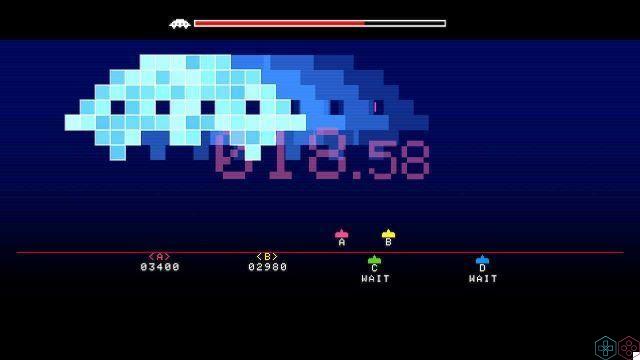 So let's close our review of Space Invaders Forever by evaluating it the graphic aspect. As for Extreme, this title still remains one of the exponents of the saga more colored e bright ever. Backgrounds may be annoying after some time, but even then there is a way to make them static. Different speech for Gigamax, which despite having on his side with the help of Square-Enix however it can do nothing with a perhaps excessive fidelity to the firstborn of the series. If nothing else, the hybrid nature of Nintendo Switch makes this a kind of "mitigating", if desired.

We have a similar dualism as regards the sonoro, but in a much less marked way. Here, too, Space Invaders Extreme is from open stage cheers to the perfect amalgamation between music and sound effects: the result “updates” the auditory dynamics of the Disney short films of the '30s to the sounds of rave parties. Gigamax does not prove to be as “ambitious”, but to our ears the involvement of the usual guarantee of ZUNTATA (which is part of the ensemble of musicians working for Super Smash Bros. Ultimate) manages to save goat and cabbage. 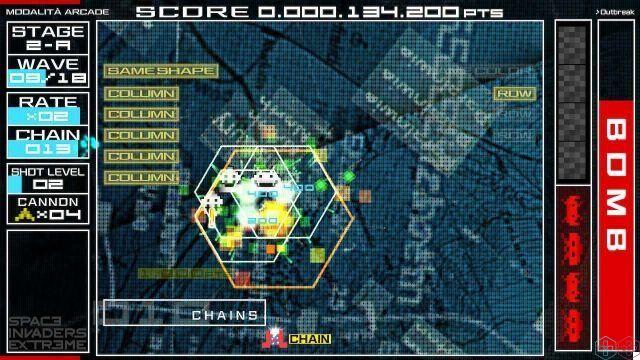 At the level of longevity, this game thrives on its own arcade soul. There is no completism whatsoever to play the role of incentive for players, outside of the hunt for the highest score. If desired, we could add the presence of online rankings, but it ends there. The gameplay it is without infamy and without praise, although penalized by the competition of those who have elevated the genre of shoot-em-ups to very different levels (even just RECCA on NES, from which Extreme took notes in the rhythm). The quality / price ratio is controversial: it is about thirty euros, whose weight is supported on the back (with difficulty, if not barely) almost exclusively by Extreme. A shame, given the historical importance of the franchise.

What do you think of our review? Let us know your opinion below, without forgetting to stay on techigames to not miss any news from the videogame world.

7 An otherwise sublime trilogy, castrated in its enormous potential