My Serendipiti on Steam led me to play Soul Gambler, a graphic adventure that "quotes" and "reworks" Goethe's Faust

I inform readers that this review will be divided into two parts: in the first we will review the game, in the second we will talk about the plot. 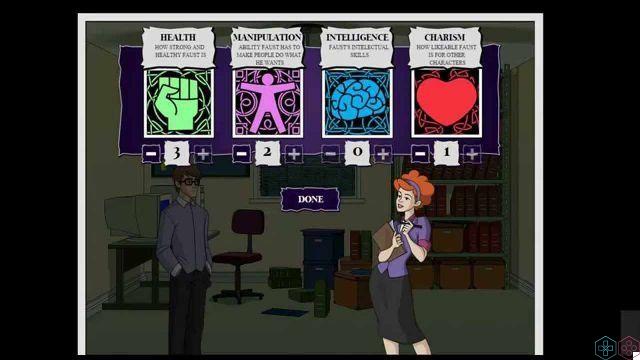 soul gambler TI puts in the shoes of Faust, an ordinary man who lives in our day and who DESTINATION is about to change forever.

Steam game description, you know how to make me want to spend a lot of money on a Tarot Simulator.

Faust he is one of the most famous characters in all of German and world literature. He is the protagonist of the homonymous dramatic poem, Faust, written in 1908 by Goethe. The poem tells of Faust, a doctor bored with his human life, and convinced by his mistrust in scientific knowledge, uses magic to modernize his existence and sells his soul to Mephistopheles, the devil. Later he will travel the world between pleasure and beauty, and at the end of the narrative we will see the redemption of Faust in front of God.

“But Simone, why are you bored with these nerd literary? "

Why imagine playing a graphic adventure as a interactive graphic novel, which deals with a story that revisits Faust in a modern way, galvanized me and not a little.

And above all, at the end of the game, a little disappointed. And I haven't changed my FATE either.

Let's dissect the HUMANAE NATURAE of this "literary homage"

soul gambler is a game developed in 2013 by m.gaia, a Brazilian team, through a crowfunding campaign on Kickstarter. On the web page the project was called: Soul Gambler – solo RPG adventure. So let's talk about a graphic adventure with an RPG component that develops a plot between esotericism, Goethe, anime, devil and ...


The graphic style of this game has changed over time, and luckily it has gone from simple computer graphics to an interactive comic. But this is a review and not an episode of kickstarter crap, so no more chatter and let's get started!

m.gaia, what will your solo RPG adventure be like?

As we said, in soul gambler the gameplay is practically identical to that of any one visual novel: read, choose, read, choose, and so on; but there is also a pleasant one RPG component: at the beginning of the game we will assign various skill points to Faust (to choose between physical strength, charisma, intelligence and pleasure towards the other characters), thus determining the outcome of some choices and in general the development of the game. Unfortunately the choices in the end are in a single alley: in fact, history has a single final situation. It's true, the conditions change a bit, but in conclusion after the first run you will have the feeling that the ending is more or less the same.

Don't expect who knows what variety though: five finals and go, and the duration of a match settles around an hour.

Did I mention that this is not a literary homage? Only Grrr reactions here 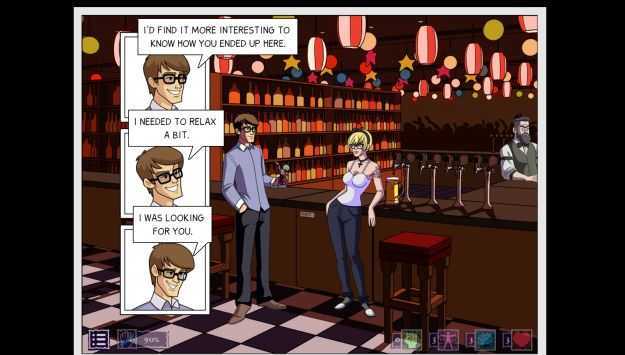 The visual sector of the title is excellent: the backgrounds where the game's dialogues flow through balloon they are all well designed and eye catching. Very nice the idea of ​​making every choice of Faust through one cartoon with a dialogue inside and the expression it should have (neutral, scared, interested).

Il character design it's cute, as well as their characterization that manages to outline distinct and interesting personalities in their own way, even if flat. In the end, taking into account the short duration of the title, there are enough backgrounds and the characters are gutted pretty well, but it will be difficult to get attached to them. At least the protagonist is the classic “I don't have a personality but I build it from choice to choice”, however it has no charisma and this means that it is up to us to characterize it.

Furthermore the musical accompaniment is not bad. Nothing epic, but the music is all appropriate and functional: once I even got slightly upset when a distressing song started. The only flaw is that there are almost always jumps between when the song ends and when it starts again. It's nothing too annoying, but it could have been avoided.

Do you like to read? To me as well, but how beautiful is the function of skip some dialogues that have already been read? Good, here it is absent and it's really annoying. At this point one wonders how things would have gone with a ten hour adventure with twenty different endings… fear huh?

Whoever wants too much plot tightens nothing

In the three chapters in which the plot takes place Soul Gambler presents twists, sudden changes in the characters, human reactions (but not too much), useless characters who appear and make drastic decisions with pretexts a little too trivial and sometimes non-existent, as in the subplot of the friend of Faust. Oh, by the way: there are some subplots. In an hour.

The game begins with Faust finding himself doing (whether you like it or not) a pact with a witch, in which we sell our soul and we can spend it (we start from 100%) to get advantages on certain occasions. The beginning of the story is quiet, even if we make some fancy flights: we pass from the boring life of Faust (having an ordinary job and being single means having a boring life?) To the gypsies who read the future, to pacts with the devil, to spirits that deform reality, to murders, suicides, sex between men and spirits, sex with your soul mate, sex with grannies, detention in jail, historical mysteries, etc., etc.

In any case there is no need to be too strict, the plot has its own meaning and even manages to catch a little bit. Plus there are choices that obscure pieces of the plot, so when you replay it you actually get the impression that you are directing the course of the story.

Despite this I have a bad taste in my mouth for the fact that all narrative content runs out so soon and do not have time to grasp the reasons for the twists. It is true that in the final section of the game everything is explained (more or less), but during the game this flaw does not allow you to be at one with the story and you find yourself being too distant from it.

From the game trailer it seems that you have to actively participate in various aspects of the protagonist's life, moving forward in a storyline built by you choice after choice. But no, the whole story is just a subplot of the main story whose protagonist is the Witch, the antagonist of the game. Yes it happens that the sense of disorientation deriving from this is not pleasant, on the contrary. And then this narrative artifice is not even wanted.

Without being professorini, the writers of this story wanted to do one quote to Boris.

We are not talking about a title that aspired to remain in the history of video games, more than anything else of a forerunner for m.gaia. The way in which Soul Gambler's Kickstarter campaign was conducted (which raised just the necessary for development, just over $ 5000) and the trailer for the game, not to mention the game itself, reveal the ingenuity of a development team who would have liked to emerge and be known by gamers from all over the world.

Taking all this into account, we understand how Goethe was in the trailer, but unlike the Kickstarter page it was not specified that the novel serves only as inspiration for this title. From the first dialogues we understand that the game is not a literary homage and perhaps it would have been better to make it more explicit. Maybe I'm a bit too fussy here, but it was a bit of a setback to see how little the game's storyline traces the novel: really, the similarities stop at "Faust sells the soul". And to a witch by the way, not the devil.

soul gambler is a game from break, for those who want to try a new game but have little time to play and want something to disengage. In the end, the full price game costs money 2,99 € su Steam. Save three coffees at the bar and go.

The plot is interesting in its own way and the characters are sensible and right. There are writing and script errors, but the thousand ailments will not make you despise the esoteric and particular plot of this title. The RPG component is pleasant and extends the overall longevity of the title by a little. Music and technical realization are very enjoyable and the game itself manages to entertain, even if you will most likely forget about its existence in a short time. Don't worry Goethe, you are always in our hearts.

In a word: there is sex, but in the nude you will only see the soul of Faust without attributes.

I thought about the plot: if you talk too much about it, your game would last a minute. I don't want to sell my soul to the spoiler god, so flab!

Space Pirates and Zombies 2 review - a sandbox among the stars ❯

add a comment of Soul Gambler Review: A RPG Adventure Only