Song of Farca review: being a hacker in a cyberpunk future

In this review we discover Song of Farca, an adventure that puts us in the shoes of a hacker working exclusively from home

Graphic adventures in recent years have undergone a real rebirth above all thanks to the indie market, which has managed to bring them back into vogue by also offering variants to the classic formula in the style of Monkey Island. It is no coincidence that two of the fathers of this genre, Ron Gilbert and Gary Winnick, creators of the saga starring Guybrush Treepwood and also of Maniac Mansion, in 2017 created the beautiful Thimbleweed Park obtaining a great success with the public. Among the indies, however, we tried to experiment and evolve the concept of graphic adventure. In this review we will analyze just one of these games, Song of Farca.

Song of Farca is a particular graphic adventure created by Alawar Premium e Wooden Monkeys, and currently only released on PC on 22 July last on Steam, Epic Game Store and GOG. From the beginning we will be faced with a story set in the near future and on the one hand also quite realistic, both for better and for worse, where the influence of cyberpunk environments. So let's dive into the maze of this interesting adventure.

As usual for a title of this type, the plot will play an important role in the game. The protagonist of the story is Isabella Song, blue-haired woman who works as a private detective in the city ​​of Farca (hence the title pun). Involved in a fight, Isabella is forced to house arrest and for this reason she will have to do all her work from home. But how does a detective work if he can't investigate crime scenes or question witnesses? Simple, using his trusted computer. Isabella is in fact an expert hacker able to look for clues using cameras and other screens, and in addition she also has drones to use in case of need.

In the 10 cases that make up the game, we will also learn about Farca's political and social situation through the protagonist's screen. In fact, our task will be to investigate cases that are different from each other, but which have the theme of classic megacorporations trying to gain more power in the city using illegal methods.

It will be up to us to decide the action plan, given that the title of the duration between 6 and 8 hours, allows us to arrive at different endings based on our choices. The story of Song of Farca is well written (point in favor to be found in the review) with interesting characters and dialogues, which will appeal to fans of dystopian science fiction, but those who know this genre well will certainly run into some clichés too many.

The first thing that stands out when playing Song of Farca is the particular layout of the game screen. In top of the screen in fact we will see Isabella's house, in which we will be able to witness the life of the protagonist while she works from her station. Sometimes it will happen to see the woman's dog pass through the room, equipped with a sort of wheelchair for the hind legs, which will act as a funny interlude. The bottom of the screen instead it will be dedicated to the work of our alter ego, in which mainly we will see her PC and all the work that the woman is doing. The choice of not letting us use the PC when the woman gets up from the desk to do something else is intelligent and fun.

In aid of the woman there will be a high-tech AI called Mauritius, which will analyze case data very quickly and provide us with all the support we need. Basically the actual game is divided into two sections:  the dialogues with the various characters which will take place via video call, e hacking which leads to the resolution of several puzzles. By going from a public camera to a mobile phone of a private citizen, we will be able to analyze the areas that interest us to find clues or send our drones on reconnaissance. Often we will be called to solve some simple puzzles, such as removing individuals from a place that we will have to analyze by hacking an alarm, to retrieve clues.

Sometimes there will be puzzles a little more difficult, such as finding pin codes or passwords in which you will need to use a little logic, and the solution will not be immediate at all. These puzzles can be frustrating at times, but the game will come to your aid if they can't be solved by completing them automatically, which could make purists of this genre turn up their noses. The other aspect of the gameplay is related to the dialogues with the characters.

Here we will have to get some clues to move forward with the story by hitting the right ones keyword in dialogue. Fortunately, we can make mistakes as many times as we want without repercussions. The dialogues are also well written, but keeping repeating the same dialogue options to try and get the right combination sometimes makes the feeling of realism run out a bit. 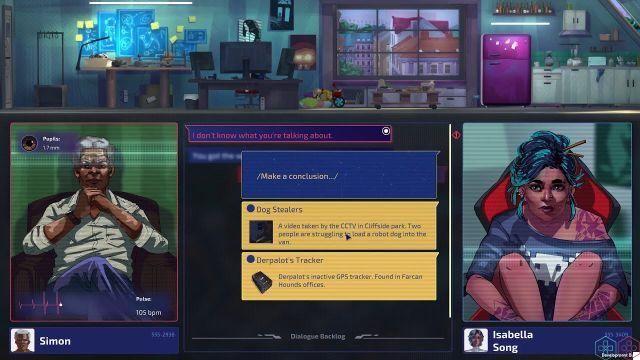 The future from a room - Song of Farca review

As we have highlighted in this review, Song of Farca is an indie title that does not have its pivot in its graphics component. For most of the time, in fact, in addition to the 2D animations of Isabella's house, we will see static images and some very simplistic animated scenes. The art direction is still valid, with a rather successful character design that knows how to put the player in a futuristic atmosphere, very reminiscent of the great classics of the genre such as Blade Runner.

The title is not dubbed, but the game will allow us to choose the music to keep in the background to keep us company during the many phases of hacking. The music is suitable for the setting, with particular and catchy sounds without infamy and without praise: they do their job as background music, but you will hardly want to listen to them again outside the game. Song of Farca at the moment is completely in English, and it could be difficult to play for those who do not know the language well, even if the level of understanding required is not too high. 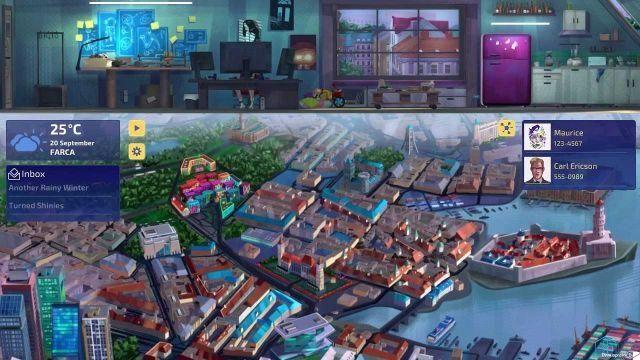 Having reached the end of the Song of Farca review, we therefore come to summarize the main points of the title. Song of Farca is a well done and interesting adventure, with obvious ones circumvented budget limits thanks to the intriguing idea of ​​making us act as a hacker detective capable of tampering with any system in town. The futuristic setting is convincing, even if there are some clichés typical of the cyberpunk genre, but the story is intriguing and pushes the player to go on to understand every detail of the cases that our detective will be called to work on. THE several endings reachable and the not exaggerated duration of the title, could entice the completists to replay it to see them all.

The gameplay is instead divided into two distinct sections, between dialogues with the characters and the investigation and hacking phase. The game is full of puzzles and mini games that will know amuse while also providing some variety so they don't tire the player too quickly. Some puzzles are perhaps a little too complex, especially for not very clear explanations, but all in all the title is made in such a way that you cannot remain stuck in one point for long, at the cost of giving you the solution automatically. Ultimately Song of Farca is a good title for those looking for an alternative and interesting graphic adventure, but without elements that make it a unique pearl of its kind.

7.2 The adventure of a detective from home

Song of Horror Episode 4 review: in the cursed abbey ❯

add a comment of Song of Farca review: being a hacker in a cyberpunk future