SNK Heroines: Tag Team Frenzy brings all the irreverence, immediacy and fun of a fighting game in decidedly skimpy clothes to Nintendo Switch and home consoles, net of some inaccuracies that we have to tell you about in our review

There are really a lot of fighting games on the market, most of which now have such recognizable and noble names that they almost eclipse the "average" productions of the competition: almost as if beyond excellence, games like Dead or Alive or Street Fighter and so on do not nothing else can exist. In reality it cannot and should not be like this, but even we find ourselves at least perplexed struggling with a title like SNK Heroines: Tag Team Frenzy.

Published by NIS America on most consoles in circulation, and especially on Nintendo Switch by virtue of the added value of portability, SNK Heroines: Tag Team Frenzy initially greeted us in a very skeptical way; after all, who would not be skeptical of the idea of ​​reviewing a fighting game in which the main female protagonists of the SNK universe, and also some of the male protagonists transformed and partially naked if necessary, give it to themselves? We want to tell you about the game in our review, highlighting its positive qualities of course, but without ever neglecting or turning a blind eye to the obvious problems that afflict it.

SNK Heroines: Tag Team Frenzy offers nothing more and nothing less than the game modes and content that we could expect within a fighting game, a standard fighting game: the problem is that precisely because there are so many of them around, he does not even do anything to dress him up in a particular way, invent some noteworthy curiosity or at least strengthen the standard offer proposed.


In short, naked contents, a bit like naked the fourteen heroines present in the list of title wrestlers go around: but naked because they are neglected, therefore only partially effective. There is a nice story mode dedicated to each of the protagonists, and it will allow you to know some background on your SNK series of belonging: but the stimulus ends there, and it soon expires in the parody, in some less successful gag, a little curtains. more successful and many opportunities to showcase the goods of the girls present. 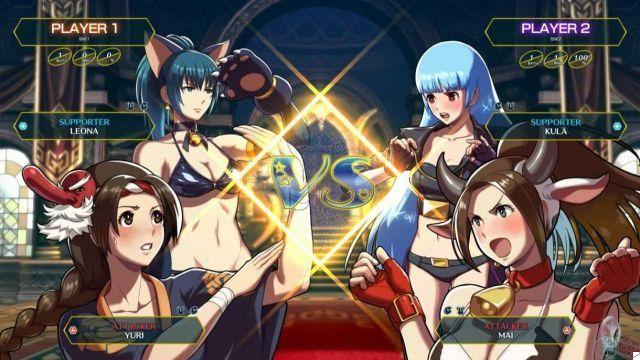 Story mode aside, which will still take you away a few hours of lightheartedness, tearing you a smile, SNK Heroines: Tag Team Frenzy also offers a classic tutorial, the training mode to become familiar with all the fighters present (even making the AI ​​fight against you), and many opportunities to accumulate collectibles on collectibles.

Most of them consist of hats, new clothes and accessories of various kinds with which you can not only dress up the protagonists for good, but also prepare them for a real photographic set where you can select background and other features before immortalizing them in all their succinct beauty. All this surrounds the actual combat, which can be enjoyed both online and offline, both in single player and multiplayer modes: we will talk about the gameplay in the next paragraph.

Without prejudice to the cornerstones of the genre, it is undeniable that in recent years many fighting games, arcade and otherwise, have embraced a progressive simplification from the point of view of game controls and gameplay; this process is well represented and perhaps taken to its extreme consequences also and above all by SNK Heroines: Tag Team Frenzy.

Light attack, heavy attack, special and final moves: all the possibilities in the gameplay are conveyed to a single button to be carried out with an hour light or prolonged pressure, depending on the result to be achieved; in the most complex of cases it will be necessary to accompany the pressure of the key to that of one of the four directions of the directional cross. Forget diagonal grabs and jumps, forget even the possibility of crouching and performing sneaky attacks against opponents' legs: SNK Heroines: Tag Team Frenzy never seeks or even thinks of such a level of difficulty. 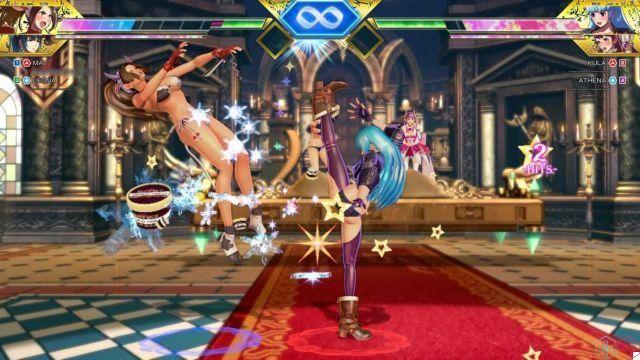 The idea of ​​NIS America was to create a fighting game as immediate as it is simple to master, naturally with all the advantages that this entails, but also with the consequent risks of the case. In fact, it is not possible not to consider the SNK Heroines: Tag Team Frenzy gameplay so immediate, yes accessible, but also extremely simplistic; The fact that a title must be within everyone's reach does not mean that it should not guarantee satisfaction to the most experienced, moreover the fun (even in the face of limited content) risks in this way to diminish after just a handful of hours of play.

In SNK Heroines: Tag Team Frenzy there are in fact few incentives to improve and try to give the best of oneself, both offline and in the online multiplayer game mode: the title shines instead in the local multiplayer against your friends, there the laughs will surely never fail, but you will not even come looking for who knows what level of competitive challenge.

The simplified controls of SNK Heroines: Tag Team Frenzy are not the only aspect of the gameplay that raises some (very) question points: the same Dual Team game mode has been designed to be immediate and offer a bit of variety, only succeeding partly. It is played with two heroines at a time, against teams made up of two competitors, but you can only win by scoring a final move, which here is called the "final" for a very specific reason.

If the opponent is now agonizing you can continue to beat him to the bitter end, but without a final move he will not end up KO and paradoxically he could also turn the tide of a perfect match; let's also add that the health bar is shared by the members of the team and that the stamina to perform the special moves recharges over time, and you will understand that everything resolves into a mechanism as dubious as it is cumbersome, which only in rare cases rewards the 'skills.

In our games of SNK Heroines: Tag Team Frenzy NIS America felt that the fourteen protagonists present were not enough, so they provided us with additional material with the characters of Thief Arthur, Skullo Mania e MissX. Normally the additional heroines for the base roaster of the title are all paid proposals, and this especially for this specific title is not good: offering them as free additional content could only do good to a production that is already very limited in content. .

The timing of publication, on the other hand, is appreciable: less than two months from the launch of the title on the market to be able to enjoy its first additional contents. MissX is the strongest girl of the three, but Thief Arthur and Skullo Mania compensate in speed of movements and execution of the final moves: in general, however, it will not take more than a dozen games to learn to control them properly, given the simplicity of the mechanics of game and gameplay of SNK Heroines: Tag Team Frenzy.

SNK Heroines: Tag Team Frenzy doesn't excel in any particular aspect, but neither is it a title that deserves a dry rejection: if you can get a reason about the bizarre sense of Japanese humor and eroticism, you might even be able to appreciate it for that which is. That is for a very simple and immediate fighting game, designed for everyone but which in all probability will be really appreciated by few. Its accessibility too often fades into a simplistic nature, especially on the gameplay side, and certainly do not help the few contents proposed and the just discreet technical sector. Maybe some corrective patches and other characters will do the production good, but up to a certain point; in portable mode on the Nintendo Switch and played with friends, however, SNK Heroines: Tag Team Frenzy certainly gains an edge.

Review Solo: the introspective journey that will lay you bare ❯