Slay the spire arrives on PS4, a turn-based rogue-like card-based in which we have to climb a tower: here's our review

For many years now, the independent gaming market has been dominated by various genres and one of these is certainly rogue-like. The reasons are simple: it is an easily declinable structure (more than a genre, to tell the truth), the random generation of levels / worlds / challenges allows you to create a lot of content with the least effort and above all guarantees maximum replayability. Of course this doesn't mean that developers should be content with throwing a handful of ideas into the game and expecting randomness to do the rest. Does Slay The Spire manage to be rogue-like the right way? Let's find out with our review.

I believe in the heart of the cards

Let's start from the beginning. Slay The spire is a rogue-like in which we have to climb a tower: each floor of the tower offers an event (combat, treasure room, merchant ...), our aim is to get to the top, where the final boss awaits us. The tower is divided into three zones and at the end of each of them we find a boss. The fights are based on cards: on the one hand we have our protagonist, on the other the enemies. In turn, we decide which cards to play: each has a cost and in each turn we have a certain amount of energy to spend. When we pass the turn, it will be up to the opponents to act.

Combat must always be approached strategically. The cards, in fact, allow you to attack and do damage to enemies (to reset their life points and eliminate them from combat) but also give us the possibility of activating a temporary defense to avoid suffering direct damage. In fact, the game shows us what action and how much damage each enemy will do to us in the next turn, so as to allow us to prepare the right defenses. This is very important since, although it is possible to heal a minimum at some bonfires placed along our climb, the recovery of life points is not an easy thing to take for granted. 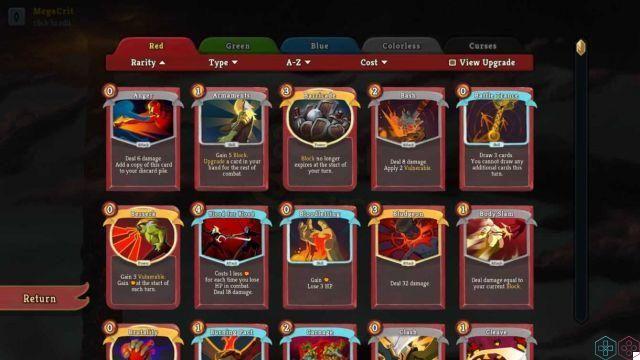 Here then arises a very small weakness of Slay The Spire: it is not really possible to adopt a personal strategy, but it is always preferable to play with a slightly defensive style, preferring combinations that allow us to accumulate defense in a massive way and aiming to weaken the opponents a little at a time. This becomes more and more important in the advanced stages as the difference in life points between us and the opponents is more and more significant.

In any case, it is not just a matter of doing damage and not taking it, but there are various other mechanisms based above all on the altered status: it is possible to inflict (and suffer) malus on damage, defense, temporary poison and various other effects. Often times, these are what make the difference between winning and losing, but clearly, it all depends on the cards in your deck. Let's see how its composition works.

At the beginning of the game we will have about ten basic cards, always the same: in practice, attacks, defenses and a slightly more powerful card. At the end of each battle, however, we are presented with a trio of cards of varying rarity (the stronger the enemies, the more likely they are rare cards) and we will have to choose one to put in our deck. Each fight, therefore, makes us stronger. It is important to choose the cards also thinking about their synergies: for example, it is not very useful to take a card that bases its damage on the number of penalties inflicted on the opponents if we do not have a deck designed for that, but we have opted for cards that aim only at brute strength. In any case, the cards can also be obtained through a merchant (each battle rewards us with money) or through particular narrative events (which we will leave you the pleasure of discovering in-game). 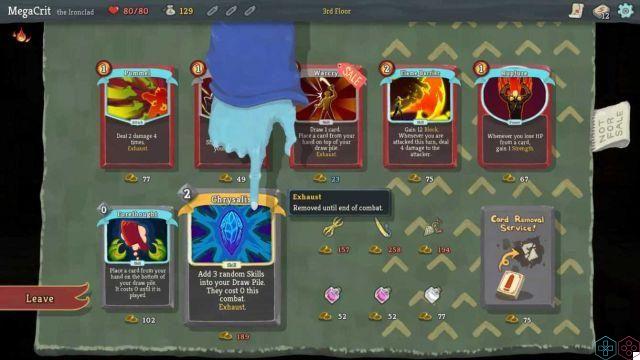 The number of cards is not very high and, although there are some to unlock by leveling up the character (after each game we get exp based on our performance), we will soon know most of the cards perfectly and will be able to use them correctly: as a rule, a rogue-like who reveals all his cards (oops) after a few hours would not get our approval, but in this case the number not exaggerated allows a more concentrated gameplay and limits to the maximum the possibility that bad luck prevents us from creating a valid deck (it can happen , but not often).

Also, and forgive us if we have kept it "secret" up to now, there is not just one character, but three: each of them has a unique set, completely different and based on an independent gameplay style. The first character is the classic warrior and will be able to inflict big damage in very few hits, focusing on physical penalties; the second is the rogue, based mainly on poison; the third is a small surprise, as it adds a gameplay mechanic not present in the decks of the first two characters: the globes, or rather elemental spheres that we can summon and keep in the field, which act independently at the end of each turn by executing additional attacks or by summoning extra defenses. Variety is therefore ensured thanks to the three PGs.

Inside the tower, moreover, we will have the possibility to choose our path of exploration. Between one fight and another we will find ourselves in a menu where a series of paths are drawn and we can then decide whether to aim for a long line of fights, or zigzagging between clashes, treasure rooms, merchants and bonfires. Also in this case, a minimum of tactic is therefore necessary, to avoid finding ourselves with a dying character within a path where there are no healing bonfires.

There are also various other mechanics, such as the card enhancement and the whole system of artifacts, that is, objects that give us extra capabilities, such as invulnerability at the first damage of each fight, upgrades in the event that you are able to create certain combinations of cards during the fight or gold bonuses that you get at the end of each fight. These are just a very few examples available. 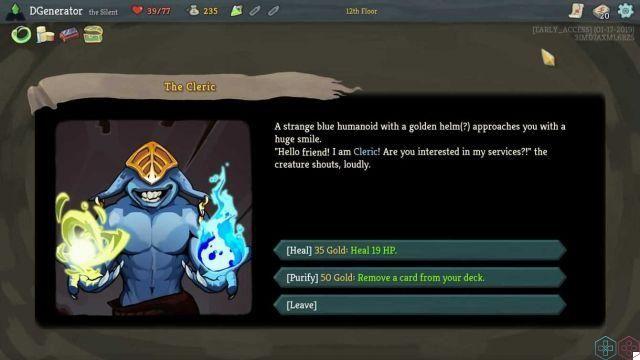 We conclude with some semi-negative notes. The number of enemies (including bosses) is not high: after a few hours we will have seen all the battle rooms and all the combinations of opponents. Yes, a not too high number, as for the cards, allows you to create very precise challenges with a well-defined combat tactic, but the variety is still limited. Their design is also curious but not very cohesive: the Tower (also speaking of the settings) does not give the impression of a real world but only of a set of ideas aggregated in a semi-random way, although all based on a similar imaginary. Fantasy. We add some technical limitations, with various slowdowns (our test took place on PS4) that do not affect the game, since the combat is turn-based, but still give a bit of boredom.

add a comment of Slay the Spire Review: Play your card