Rune review: a modern domino… even a little bit magical

A modern domino with a slightly magical theme in which you will have to conquer as many Runes as possible to win the game, read its review

Rune is a strategy game where you will try to summon Zemilio from another world! Gather mana from runestones to complete the ritual!

Rune is a two-player game from Little Rocket Games; a small game of strategy, a modern domino, in which the goal that the players have to achieve is to conquer as many runes as possible and make the highest score to win the game.

In a box that fits right in the palm of your hand we find everything you need for a face-to-face game full of bite. The components are:

Setup and how to play | Rune Review

During your turn, you must place a card from your hand and then draw a card or place a Rune Master. Let's look specifically at these actions:

In the first two photos you can see two examples of how Rune cards are placed and in the third photo an example of Rune Master placement.


End of the game and scoring | Rune Review

When a player places his last Rune Master, his opponent can no longer draw any more cards, but he can continue to place the remaining cards in his hand and the remaining Masters. The game ends when all the Masters have been placed and vince who has scored the most points.

The values ​​of the Runes to calculate the final total score are as follows:

To play with this micro-expansion you need to use the Rune token, the one with double face, which is used in the following ways: 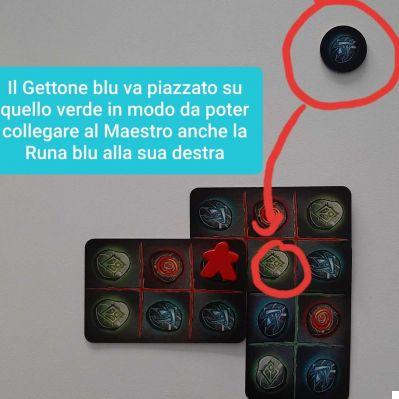 Rune is one of the two-player titles that I like best for its compactness and very strategic nature, practically a big game in a small box. I also like its being similar to the classic domino in the placement of cards (although in the domino the tiles are placed next to each other, while in Rune the cards overlap), but at the same time offering a different game thanks to the placement of the Rune Master and the Grand Master micro-expansion. The only two flaws of this game are the material with which the cards are made, because they tend to be easily damaged on the edges even after playing a little, and the placement of the cards that during the first matches raises doubts about some moves.

To fully appreciate this game it is advisable to play a few test games, before embarking on serious challenges. Also regarding the games, on the box it is marked that a game lasts about 10 minutes, but it could also last longer if the moves take more time to think about it. Finally, the game is perfect for two people, but it is also true that in some situations I felt the need to be able to play at least 4 because I would have liked to offer it to the family and to be able to play it all together. So I hope that in the future an expansion will be created that will allow us to expand the number of players, a bit like what happened with Sagrada.

Ryuutama review: adventure and collaboration in the world of Ryuujin ❯

add a comment of Rune review: a modern domino… even a little bit magical