We roll down a hill for the third time. Let's find out in this review Rock of Ages 3: Make & Brake in the Nintendo Switch version

Among the things that most have the ability to generate adrealina and relieve stress, there is certainly the ability destroy all that happens to us. The classic housewife fight is one of those activities that should release endorphins by the tons, between plates and slippers thrown like knives and destroyed against the wall. Or a recent trend is that of the Rage Room, where it is possible to destroy everything inside a room, equipped with a hammer or who knows what other melee weapon. However, video games are much less dangerous escape valves, just look for the right ones. Rock of Ages 3: Make & Brake with a bit of humor and destruction is one of those, let's find out in this version review for Nintendo Switch.

The inspirations of the boulder

At a time when indies were slowly making their way onto Steam, Rock of Ages'ACE Team he was getting noticed for his originality. The protagonist is a ball that rolls and destroys everything in its path, a simple but extremely effective idea, especially when associated with a grotesque story that takes with both hands from the humor of the Monty Python, including well-known director Terry Gilliam. All of this has been taken up and expanded in the following, with the introduction of new modes and the possibility of playing cooperatively online. In Rock of Ages 3: Make & Brake the developers bring us back in the shoes of a rolling boulder, embellished with lots of new and old content on the Nintendo Switch. 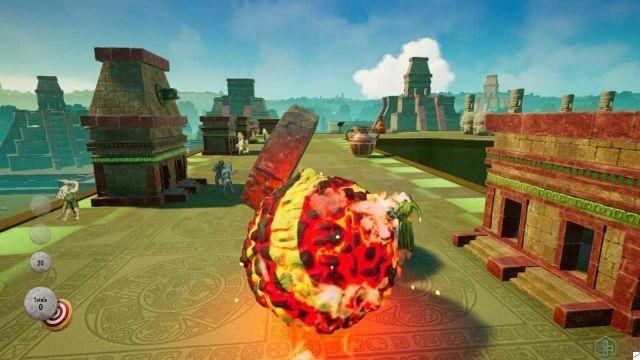 The origins of the boulder - Rock of Ages 3: Make & Brake review, rolling on Nintendo Switch

The Rock of Ages story is a masterpiece of execution and non-sense fiction. The events are described through some animated stop motion scenes that reflect the aesthetics and humor of Monty Python, a group of British comedians with an avant-garde style, who proposed themes and social criticisms exposed with scenes in live action and animation. Rock of Ages is directly inspired by their films such as: And Now Something Completely Different, The Holy Grail and Bryan of Nazareth. History and modernity merge continuously, generating absurd situations that are difficult to do DON'T they will make you laugh.


More specifically, this game takes historical, artistic, mythological, literary elements and creates a smoothie of hilarity. The protagonist of this third chapter is no longer Atlas, but a more stupid and frivolous Ulysses who must return to Ithaca after the famous battle of Troy. Only, he will not meet the mermaids and Charybdis, but he will travel to islands facing historical characters such as: Montezuma, William Tell, Caesar and many others. Often these characters will be intent on doing impossible and paradoxical things, such as enjoying a football match on TV or simply surviving canonical events. Absurdities that translate perfectly into the gameplay as well. 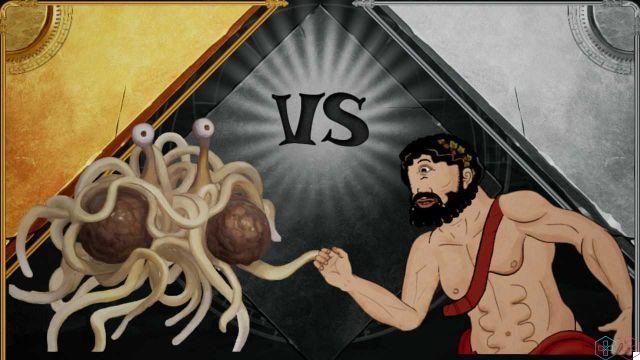 The Story of the Boulder - Rock of Ages 3: Make & Brake Review, Roll on Nintendo Switch

Taking up the Super Mario-style overworld of the second chapter, here the main map is a sea that looks like a starry sky. We sail with the ship of Ulysses, and based on the stars we have, we can decide which island to tackle first. Each island unlocks a new challenger and among the first there is the Cyclops, who will suffer the oppression of the famous warrior. We can decide whether to face one of its challenges, or roll directly against its track and boulder made of herded sheep.

Regardless of our choice, rolling balls are always the protagonists, because as Leonardo Da Vinci said: rolling a boulder down a hill is the best attack strategy. However the player is given the option to choose the player character, which in any case will not replace Ulysses in the animated scenes. Our favorite is the Flying Spaghetti Monster. 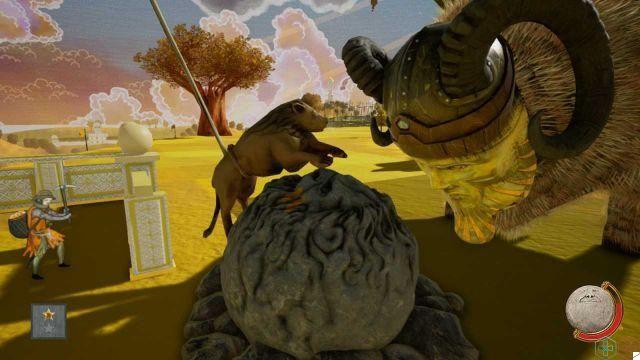 The ways of approaching the boulder - Rock of Ages 3: Make & Brake review, rolling on Nintendo Switch

The most classic mode is the one that sees us in a first phase rolling along a path made of obstacles to be killed and enemies ready to stop our descent. On the bottom is the opposing stronghold, whose door must be knocked down with various descents and direct hits, in order to then be able to crush the historical figure inside. The controls for rolling the ball are responsive once again, despite the deliberate fight against gravity that makes control difficult. However, after a couple of runs you will get used to it, whizzing and breaking down obstacles as if nothing had happened.

In the second phase we will have to build defenses along our path to stop the enemy's advance just like in a classic tower defense, where however the physics makes everything more unpredictable. There are numerous units that we can exploit and which are unlocked by completing challenges. The basic strategy would be to erect walls on the track to slow down the advance of the opposing boulders, but soon you will realize that by themselves they are not at all effective. 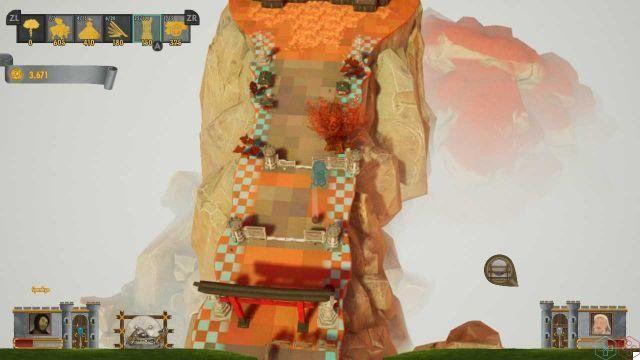 The Weapons of the Boulder - Rock of Ages 3: Make & Brake Review, Roll on Nintendo Switch

Here the lions on the balloons come to our aid, the adhesive cows, the jesters crashing into the screen, Leonardo Da Vinci's tank or minotaurs. There are so many units and they allow the player to indulge themselves with all possible combos. For example, grouping a Minotaur with a host of bulls could prove lethal to any opponent. However, before the game starts, we will have to choose which units we want to use, without even knowing what kind of track we are going to face. A pinch of unpredictability that does not disturb.


In addition to the units we must choose the boulder to use, which based on the shape and material, can radically change the attack power, maneuverability, durability, speed and more. For example, the cubic ball has devastating attack power, but is almost uncontrollable on the most complex courses. We can choose from burning boulders, in armor, of sand to others much more extravagant like the cheese shape or the poor Humpty Dumpty which breaks easily. In this third chapter the choice is quite wide, but we must also mention the fact that many assets have been transferred from the first two games. 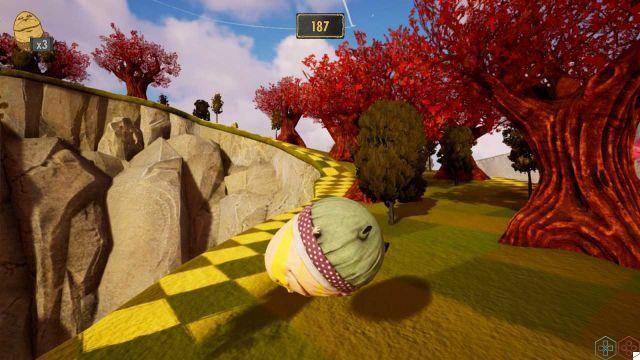 To collect more stars, we will also have to face the secondary challenges: speed races, target killing, defense only and the tracks of Wonderland. Sometimes it will happen that you have to take down special bosses in small arenas, where a bit of strategy will have to be used to identify their weaknesses. A modest amount of modes, even more fun and long-lasting if you play in local 2-player cooperative or 4-player online. In this case the good old man comes into play split screen and a double dose of obstacles to tackle.

The highlight of this third chapter is the ability to create your own tracks and share them online with the world. The level editor we tried proved to be a powerful creative tool as long as you insert a beginning and end path. While mouse and keyboard are better suited for building, the controller proved more than worth the task. Roads can be erected in both length and height that can be changed and every decorative and interactive element encountered in the game can be used to create spectacular tracks. With the right creativity and precision it would be possible to recreate the tracks developed for the story mode. 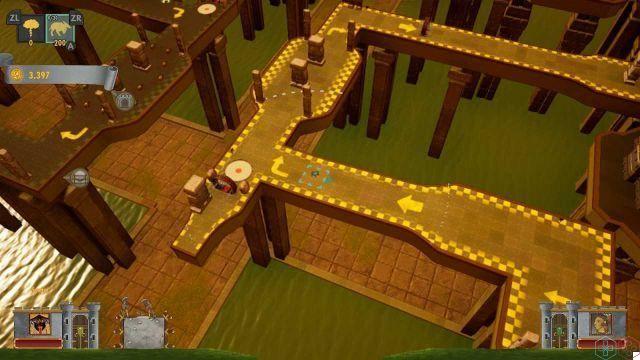 The Problems of the Boulder - Rock of Ages 3: Make & Brake Review, Roll on Nintendo Switch

From a purely aesthetic point of view, Rock of Ages 3 has proven itself once again capable of meeting expectations. The stop motion animations that mark the rhythm of the plot progression are of a unique and satisfying beauty. Just like Monty Python did, different expressive styles come together to create surreal panoramas. As eccentric as it is, nothing ever really feels out of place.

Unfortunately, the performances are out of tune. In the review Rock of Ages 3: Make & Brake on Nintendo Switch, in the most excited moments it is easy for it to go well below 30 frames per second. Problem that is temporarily aggravated almost every time the game is resumed after putting the console in sleep mode. Furthermore we have encountered various bugs and inconveniences. We often fell into the textures or the game simply crashed, forcing us to restart the software or the game.

Even the opposing artificial intelligence did not have an easy life, sometimes getting stuck in the polygons and allowing us to win more easily. The interface in portable mode is also somewhat inconvenient since the font size is too small, suitable only for use on a big screen. We look forward to resolving these issues in future updates. 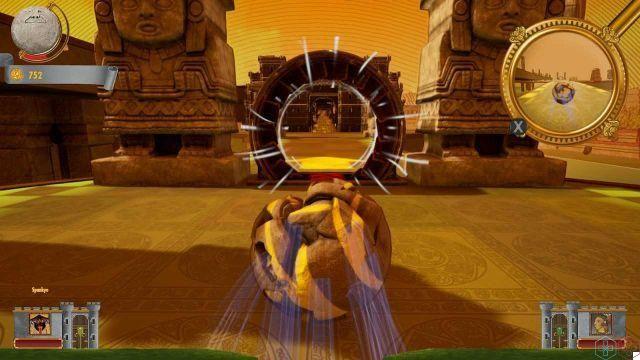 The boulder has broken through the door

Rock of Ages 3: Make & Brake is a video game that can give you great satisfaction, for the most part thanks to very simple gameplay. Rolling at high speed knocking down every obstacle seeing it explode into hundreds of pieces never disappoints. While some gameplay content has certainly been rescued from previous games, the new story and the map editor alone fully justify the existence of this third chapter. However, know that in the sea of ​​this new odyssey on Nintendo Switch, bugs or other technical problems can be hidden.

The game in today's review, Rock of Ages 3: Make & Brake, is now available on Nintendo Switch, PlayStation 4, Xbox One and PC; on August 14 it will also land on Google Stadia. To stay up to date on video games and technology, we recommend that you continue to follow us on the pages of techigames.

Rogue Company review: all for one and the blaster for all! ❯