River City Girls lands on consoles and PC with all the power of the good old days: discover our fighting game, in our review

There was a time when i running fighting game they were really great, especially in the now defunct game rooms and bathing establishments: it is a slightly nostalgic premise, but fundamental for understanding the publication of River City Girls so many years later, and on an audience of consoles that is anything but negligible.

In fact, at the time of writing, the title developed in collaboration between WayForward and Arc System Works is already available on PC, PlayStation 4, Nintendo Switch and Xbox One, but its roots lie in a series of video games as old as the world, which debuted for the first time in Japan in the 90s on family computers. You will find out all this (and much more) in our review of River City Girls for PlayStation 4. And if you love pixel-based video games: have you already taken a look at the Blasphemous review?

Some hints of plot

River City Girls is set in Japan and in the most infamous suburbs of any Japanese city, but strongly winks at the Western world and some of its stereotypes (for example, the less prestigious schools present in any self-respecting city center). Two students who also have some unfinished business with justice, that is Kyoko e Misako, set out on an adventure to recover the missing boyfriends, Kunio and Riki.

The narrative premise already suggests the caricatural, funny and parody atmosphere of the entire production of Arc System Works and WayForward which, we anticipate, works really perfectly. Starting from the escape from the most boring math class in the world, Kyoko and Misako will leave atadventure around the city, in six different areas that can be freely explored and divided into various areas and levels, each one full of enemies. The narrative engine is clearly only specious, since what matters (like any good scrolling fighting game) is to beat the many enemies present, with bare hands, with various scenographic combos, or by collecting useful objects such as garbage cans, chains. and baseball bats.


The quotations and references to the masterpieces of the videogame genre are always around the corner, and culminate with really well-made boss fights. Do not expect too much from the narrative, which can be completed in a few hours: the adventure is freely replayable even with additional modes and challenges. 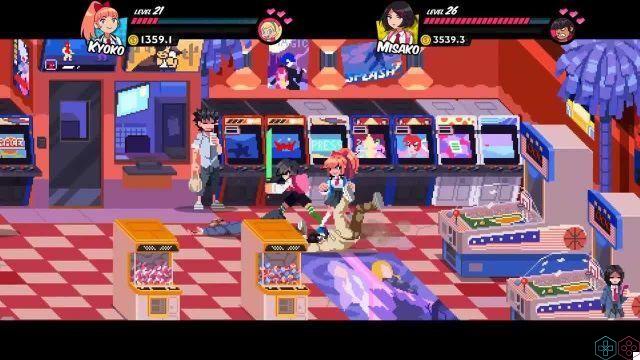 River City Girls, as previously mentioned, is a running fighting game, an action that meets the fighting game in wonderful pixel art graphics. It will remind you at first sight of the best titles of your childhood, but it has all the tricks up its sleeve of modern titles: local multiplayer, character leveling system with consequent bonuses, accessories to equip, side missions and much more.

Clearly it can be enjoyed freely from start to finish without paying attention to some of these aspects: just remember that with Square the light attack is made, with Triangle the heavy / loaded one, and that anything that moves is potentially dangerous. Hitting everything in joy gives its best as soon as the player learns to properly master the control system on PlayStation 4, as well as unlocking various additional special moves. To do this it will be necessary to level up the protagonists, and this will be very simple (unless you start dodging all the fights to run towards the final boss of each area).

However, this will not always be possible: in some areas of the game map the exits will be blocked, and to unlock you must first eliminate all the enemies present; a mechanic that has been brought back from previous installments in the series. Discounts against bosses will take a few moments to learn enemy moves, otherwise they'll blow you away like leaves in the wind; a few attempts, however, and the game will be done. 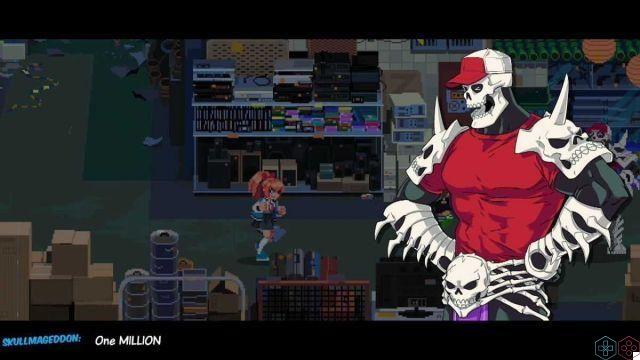 Each time you defeat a boss you will unlock accessories nice to equip from the handbag of the two protagonists (at the beginning of the game you will have to choose which of the two to play, but the offer is ultimately identical, as well as the style). We immediately activated a Tamagochi that increased the damage dealt to female enemies (unlikely cheerleaders out of their minds), but there are plenty of them to sift through, for only two free slots available; otherwise the offer would become all too simple to complete. After the main adventure you can replay in Hard mode (and it is really difficult, trust me, because you will suffer much more damage) so as to explore the areas that you missed during the first run and discover all the secrets prepared by WayForward Entertainment and Arc System Works .

From a technical and graphic point of view, River City Girls is a little gem on PlayStation 4. We tested it on PlayStation 4 Pro, to be meticulous: it oozes charisma from every pore, the high definition is really fine, and the care for the detail (as always, when it comes to WayForward) is truly remarkable. The presence of the mode is also important local multiplayer: Your friend can join the game at any time, just like in a real arcade cabinet. On the other hand, there is no online feature, and it is a real shame because it would have really been the last missing element for a title that is not lacking, on consoles and PCs, really nothing. In general, however, the longevity of the adventure is not record-breaking, but the many secrets, the multiplayer mode and the ability to replay everything at various difficulties will offer hours and hours of challenge to buyers. 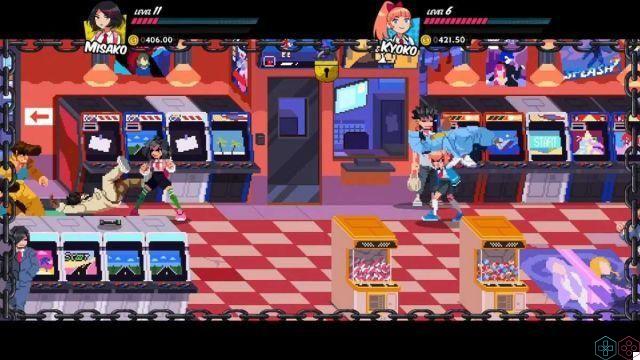 River City Girls is a title that you can't really miss, if you enjoyed the seaside cabinets and our local game rooms in the past. WayForward and Arc System Works production winks at the scrolling fighting games of the old days, but also introduces features from a real action game today.

The progression by levels, the possibility to learn new moves, the high replayability, the local multiplayer and much more make the purchase almost mandatory; we must also consider that on PlayStation 4 graphic detail and frame rate are excellent, and that if you want on Nintendo Switch you could also add the portability factor to all this. It's time to go back to Japan, to beat up a lot of enemies: even at school!