Attack on Titan 2 lands on PlayStation 4, Xbox One, PC and Nintendo Switch: in our review we analyze the strengths and the slips of the title. Is it worth returning to Eren's company?

Attack on Titan 2 has shown up on more than one occasion recently. Better known in Spain as "Attack of the Giants", AOT is one of the most famous manga of recent years. They have already drawn (as a good practice) a fair number of products, including anime, gadgets and even videogames. In the last five years the brand has grown exponentially, so much so that the work of Hajime Isayama, after the first Attack on Titan: Winds of Freedom, is ready to offer us the second iteration of the series: Attack on Titan 2. The title is at the time of writing available on PlayStatione 4, Xbox One and PC. There is also a slightly less performing version, but with the same contents, available to users on the Nintendo Switch.

We spent more than ten hours in contact with the latest product from Omega Force e Tecmo Koei (on PlayStation 4), and we're ready for the final verdict. Put on the reconnaissance equipment: you "fly" to make the streets of the city safe by shooting down some dangerous starving colossus with Attack on Titan 2.

Just like in the manga - Attack on Titan 2 review

The question that most players will ask is this: “I don't follow the manga / anime of Attack on Titan“, Does it make sense to buy the game? Or: “I didn't play the first Attack on Titan, it makes sense to buy Attack on Titan 2? And what if I don't understand anything? ". Rest assured, take a deep breath: there is no need for any kind of prior knowledge to devote himself to the new chapter of Koei Tecmo. Or rather: if you follow the manga or the anime you will have many more incentives to continue in the plot, and you will certainly enjoy some precise cutscenes more. But Omega Force he thought just about everyone with Attack on Titan 2, and now we explain why.


The first half of the adventure proposed by the Story mode faithfully follows (not to say that it has been taken into account) that of the first chapter. Those who have played the first chapter of the series will spend the initial hours of the game wondering if they have not bought the same title twice, only to realize the difference with the refined new combat system against the giants. The choice was made for the benefit of most users of course, and keeping in mind the number of copies sold of the first iteration of the franchise. Anyway, Attack on Titan 2 is a new chapter, full of new content, and such as to justify that number 2 in the title. 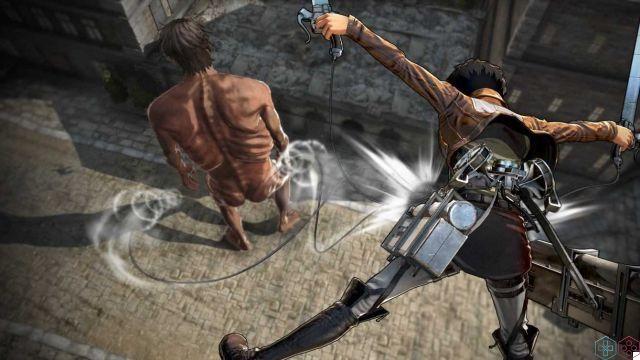 Continuing the plot we will relive all the main events of the manda, in an adaptation made really with care, and even more enjoyable than that of the first chapter, on balance. In theory the narrative is that of a spin-off since the protagonist is the player who creates it, from scratch: but his story is closely linked to that of the most famous characters in the series, above all of course Eren. Even our alter ego experiences firsthand that famous attack from which all the events of the manga spring, we too see a bad end to a person we particularly care about. And finally, we too will decide to make the massacre of the giants the purpose of our existence.

Attack on Titan 2 offers a full-bodied and detailed editor. Thanks to it in the initial stages we will be able to create our Giant hunter from scratch, customizing it in every smallest detail. It's a bit like the philosophy behind other titles like Dragon Ball e Naruto, increasingly focused on the possibility of creating "yourself" within the beloved game world. Thereafter the Koei Tecmo title reveals all its cards, alternating between them two expertly balanced modes (and absent in the first chapter of the franchise).


The first is called "Daily life", and will allow us to go around almost completely freely within the world imagined by our mangaka. These are trips that are not necessarily mandatory in the context of Story Mode, but certainly a welcome addition: we can visit various shops and services, talk to the characters of the series but above all unlock useful activities that we can then equip and take with us into battle. . Each character belonging to the series can interact with us, and if we manage to meet certain requirements, he will give us his particular ability. Obtaining them will take some time and will push us to complete a certain series of side quests, for example a strategic or particular aid on the battlefield. Not to mention that we won't have to get the answers wrong during optional conversations. 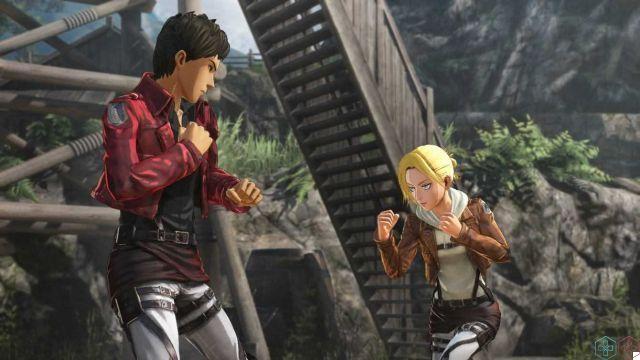 From the point of view of battle-based 3D Maneuver Gear, Attack on Titan 2 faithfully reproduces the clashes of the series, but managed to further enrich the strategy in place. How? Making the Giants less apathetic than expected. Now it will not be easier as in the first chapter to get to quickly tear apart his limbs or body, because they will notice our presence and counterattack with ferocity. This is thanks to the new danger zone, within which they are able to perceive our presence. However, this does not mean that the player is now left alone: instead, new possibilities open up to him thanks to sneak attacks, a sequence of moves that lead to a deadly attack, most of the time conclusive. However, the technique must be used with caution because in the short period of time necessary to implement it the other enemies in the field could get their hands off us ... and eat us.

Attack on Titan 2 is a good second installment in the series: it enriches everything that the first had to offer, and reviews some secondary problems related to gameplay on the battlefield. There is still work to be done, especially on the technical sector and facial animations, as well as on the dispersiveness of everything that is unrelated to the secondary missions. It remains a highly recommended title for fans of the series, and a purchase to be evaluated even for those who are "fasting for giants". Perhaps, in this second case, the right opportunity is that of the first price cut.