Review Ticket to Ride: a journey across the United States

Winner of numerous awards such as the Spiel des Jahres in 2004, Ticket to Ride stands out as one of the best Eurogames of recent years. Here is our review

Have you ever thought that a board game based on the US rail network could be fun? Published by Days of Wonder (USA) and in Spain by Asterion Press (acquired in 2015 by the French Asmodée Éditions), Ticket to Ride simulates the construction of a functional and complete railway network with simple rules and elegant mechanics. Techigames helps you understand how with this new review!

The game is set in the early 900s, the style of the documents of the time is reflected in the beautiful graphics of the playing cards and the US map that acts as a board. On it are represented various US cities connected by railway lines of different colors: orange, blue, white, yellow, black, red, green, purple and the special gray ones. Each railway line is divided into a certain number of boxes. Finally, the board is bordered with the scoring boxes on which the tokens will move.

The box also includes a series of sets of wagons of different colors, each as long as a box, and for each set a pawn of the same color. 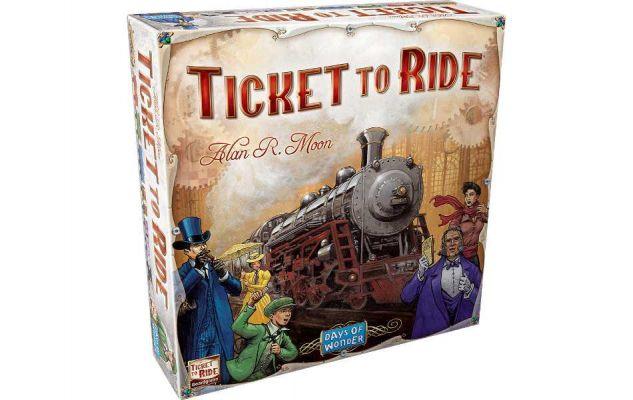 Each player chooses a color, based on which he receives a set of 45 wagons and a pawn to be placed on the first square of the scoring track; 4 train cards and 3 ticket cards, drawn at random and kept face down from the opponents. Then 5 train cards are placed face up, available to everyone, and the remaining piles of trains and tickets, covered.

Victory is awarded to whoever finishes the game with the most points.

Players earn points by placing their colored wagons on the free squares of the various routes that connect the cities, thus creating connections: a section is conquered if two cities are connected by wagons of the same color. In particular, if you complete a route indicated on your ticket card, you will further earn the points indicated by winning that ticket card.

When a competitor is left with 2 or fewer wagons in their reserve, the round ends and the game ends. Finally, each subtracts the points of the unconquered ticket cards. A score bonus is then given to whoever has conquered the longest leg. Whoever has the most points wins the Ticket to Ride game.

Who is on duty has one of 3 actions available:

Our impressions of the game | Ticket to Ride Review

Ticket to Ride is an excellent eurogame with a very short set up that will involve the group in an exciting strategic match. Well yes, because each city can be reached in different ways, you can confuse your opponents' ideas by planning unexpected routes making the game from monotonous in the early stages to intriguing as you proceed, this because, gradually, the free lines decrease significantly making your own more difficult goals to achieve. We must try to guess the moves of the opponents: the game board, visible to all, is the engine of the strategy and with a good memory you can guess the cards of others, and the consequent moves. A simple game in the rules, complex in the possible strategies, suitable for all ages. Stupendous.

add a comment of Review Ticket to Ride: a journey across the United States