If the existence of ports like those of Doom or Wolfenstein II on Nintendo Switch were already surprising, that of The Witcher 3 it's a whole other story. The two Bethesda shooters are in fact light enough to run at 60 fps even on PS4 and Xbox One. Here instead we are talking about a enorme open-world which still puts a strain on the two main consoles in maintaining a fixed 30fps. So let's see what compromises they had to make CD PROJECT RED e Saber Interactive to achieve their goal: to bring a version of the latest Strigo adventure to the Nintendo hybrid without any cut in the contents.

To bring a game of the caliber of The Witcher 3 to what is in effect one portable console, it was essentially a question of understanding on which elements the most compromises could be made, but above all at what point to stop. The most obvious compromise is obviously the cut in resolution, scaled to dynamic 720p in docked mode, and dynamic 540p in portable mode. The latter figure can be frightening, and also thanks to the temporary anti-aliasing, the game inevitably appears a bit blurry, but thanks to the small size of the Switch display the final result is more than acceptable.

Other cuts have been made in the textures, which also to take up less space on the cartridge, are very similar to those of lower quality on PC. Again, the Switch's display makes for a much more enjoyable experience, while in docked mode the trade-off is very clear (or very unclear, if you prefer). Vegetation density and render distance are slightly less than the lowest options on PC, and sadly some smaller plants no longer move in the wind.


The other graphics options are all similar to lower versions on PC, except for the render distance. In fact, the latter has been modified so as not to cause an excessive pop-in of the NPCs, for example. The pop-in of objects and vegetation is however another quite evident compromise, especially while using the horse or during cut-scenes. In the latter, in particular, the frequent rapid changes of camera from one area to another put a strain on the console.

The framerate is pretty stable at 30fps, with some not too important drop just in fights with many enemies or in complex areas. Riding through Novigrad or the Swamp of the Hunchback is therefore very pleasant, alone sporadic drops in framerate also typical of the PS4 and Xbox One versions. Uploads take about the same time as the PS4 version, and sometimes even less, thanks to texture compression. 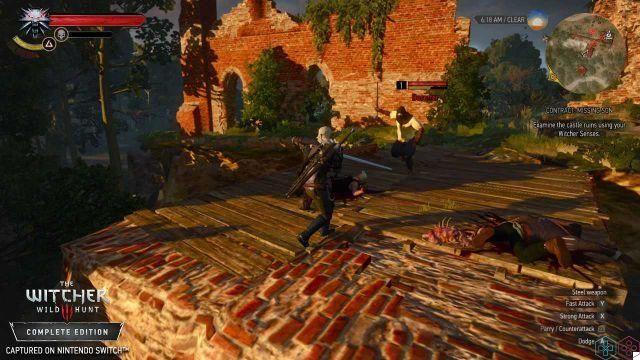 After having seen the various technical compromises, however, it is only right to applaud the developers for the number of those in the contents: zero. This version contains in fact every single content released so far on PC and Console, including 2 huge expansions Hearts of Stone e Blood and Wine. CD PROJEKT RED also wanted to keep the density of NPCs, even in more challenging areas such as Hierarch Square in Novigrad. To lighten the load on the CPU, however, the developers had to halve the number of frames of animations of NPCs or enemies over long distances.

Another difficult obstacle to overcome was definitely getting both the game and expansions into one single 32GB cartridge. In fact, there won't be no substantial updates to be downloaded necessarily in order to play the title, as happens for example with the Spyro trilogy. To do this, the textures were compressed, and the cut-scenes were recoded in 720p, being higher resolutions however superfluous. The compression of the pre-rendered cut-scenes is perceived quite in docked mode, while luckily a compression that hardly noticeable is that of audio.

The risk was in fact that the audio was compressed to the point of making the game with headphones annoying, as unfortunately happens for Dark Souls: Remastered. The point is therefore that, with the necessary compromises, every single audio track and every cut-scene is still present, with even a quality slightly affected. 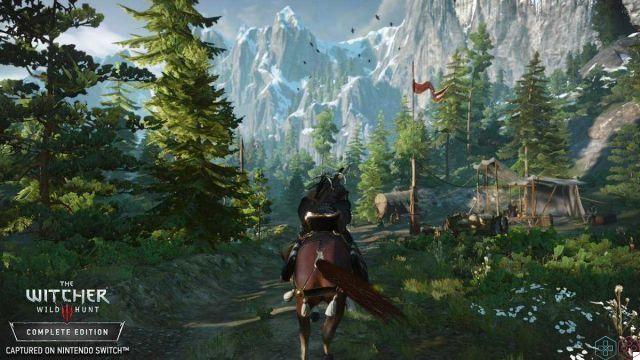 So who should buy this version?

For who he never played Geralt's latest adventure and owning no other platforms, the Switch version of The Witcher 3 is simply unmissable. In fact, by playing in portability you will be able to experience a game that retains all its original splendor of the release now 4 years ago. In fact, in addition to an excellent technical sector, CD Projekt's masterpiece boasted a splendid artistic direction, which is unaffected by the reduced power of the Switch. Then obviously remain the quality of the plot and the narrative, the beauty and variety of the settings, and the narrative complexity of the missions, including secondary ones.


This porting manages to convince even those who want to replay the title in portability, having already played it for dozens and dozens of hours on other platforms. For those not interested in the aspect of portability it is obviously difficult to recommend, given that su TV the low resolution and other graphic cuts result really too obvious. In short, we see that, as with other similar ports, the real strength that justifies the purchase is the ability to play it. wherever you want.

The last aspect to consider is obviously the price, which a € for a game with 4 years on the shoulders can make you turn up your nose. This figure is however instead perfectly justified, as well as the enormous work behind the port, the simple material cost of the 32GB cartridges. This is a game therefore to be bought absolutely in physical copy, as well as to justify the price, which obviously remains unchanged on eShop, because otherwise it is an external SD card is required. The physical version of the game also includes paper map and compendium, stickers, and still saves the trouble of downloading 32GB with the Switch's not-so-good connection.

We remember that The Witcher 3: Complete Edition is available on Nintendo Switch since October 15, 2019. For other reviews, specials, guides and news from the gaming market, be sure to go to the dedicated section on our site!

8 Porting to the limits of the miracle!