The Walking Dead Collection is available to offer the complete package on the series that marked Telltale's success: let's find out all the details in our review

Over the years, Telltale Games has worked hard to bring to light a large number of works in collaboration with major brands in the world of comics, cinema and video games. The Wolf among us (from the Fables comic), Game of Thrones (which I told you about on this occasion), Batman (one of the games included in the PS Plus subscription this January) and, again, Tales from the Borderlands, Minecraft, Guardians of the Galaxy. There are many names at stake, but we must not forget the first real collaboration that brought the Californian team to the fore: The Walking Dead.

The complete collection of all 19 episodes that make up the long-running saga of The Walking Dead - The Telltale series. Let's find out all the details in this review. 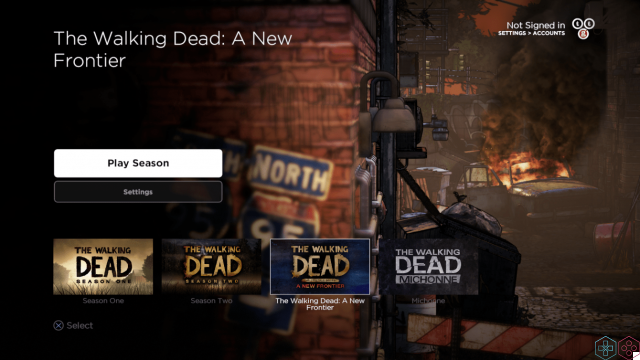 All The Walking Dead Collection package

Within The Walking Dead Collection we will find: Season One including the extra episode 400 days, Season Two, the third season called A New Frontier and, finally, the mini-season (3 episodes) dedicated to the famous Michonne, one of the protagonists comics and TV series.

The seasons prior to A New Frontier suffered a work of graphic modernization to make their old-gen nature less clear. The work done is of valuable accomplishment: Improved lighting effects, clean textures and a constant modernization of polygonal models in both the characters and the environment. However, the technical leap between one season and another remains clearly visible, especially passing to A New Frontier and Michonne, but in general we will play the best possible version of The Walking Dead. Unfortunately, the games carry with them those slight technical flaws that distinguish Telltale works: some frozen animation, sudden transitions with long uploads, characters who spit where they shouldn't (with even a disturbing appearance in the middle of the group of a dead character) and some errors in moving data between one season and another.


Small sins that are easy to overlook, but which always give an unpleasant feeling, especially when you find yourself in front of a product that should give the definitive experience (both in terms of content and quality) from a company that produces only one type of videogames for many years. To this we add the fact that the opportunity was not (again) taken to include a Spanish translation for the subtitles. When it comes to translation costs, we always go into a minefield, we know, but it is undeniable that, in such a wordy game, the Spanish language would have been an incredible added value.

The English dubbing, in any case, settles on excellent levels for all the episodes, completely promoting the sound sector, also thanks to valid soundtracks that, after 19 episodes, will remain in our hearts. 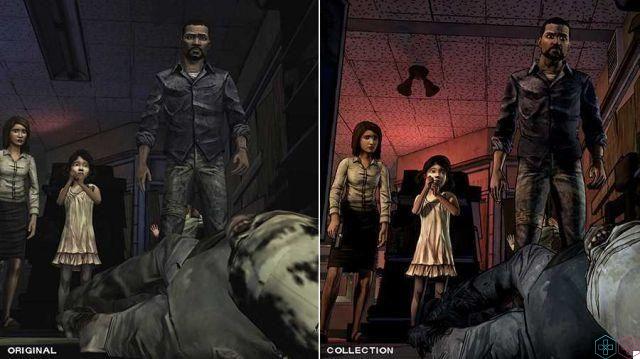 The evolution of mechanics in The Walking Dead Collection

Telltale games, as we know, has never deviated much from the formula that made it famous and, to date, even the walls know what to expect from one of their games, so much so that the definition "Telltale video game is now common. ". In any case, let's quickly see what we are talking about.

Pad in hand, we are faced with a modern graphic adventure, founded on limited-time dialogues and choices that will lead the story to evolve in one direction over another. Although from a distance it could be argued that, from one game to another, there has been no change of any kind (evolution would be too strong a term), to a closer eye it cannot escape how Telltale has matured over the years and has including what were the strengths of their works.

In fact, in the first season, between one dialogue and another, we will have to deal with sequences that have prompted critics to define the work as a “modern graphic adventure”. In practice, we will find ourselves moving through small rooms, looking for all the interactable and collectable objects, so as to obtain the tools to complete a task and be able to advance the plot (unlocking a door or repairing some object, for example) .

This type of sequences lead to a lowering of the pace of the game and a consequent boredom, since it is never a question of having to solve puzzles (as in a real graphic adventure) but only of having to dedicate oneself to pixel hunting (in a broad sense, of course) . All this, moreover, is not facilitated by the problems of controls and cameras that characterize the first season.

Fortunately, from this point of view, from season to season everything improves, making the gameplay more fluid, which will be increasingly based on simple QTEs, not very innovative but always effective, e brief explorations of the environments, useful to raise the tension between a horde of zombies and a shooting.

The story of Clementine

The focal point of this series (and of Telltale works in general) is the storytelling and a taste for the interpretation of the character. In each season, we will control a specific survivor who will be called upon to interact with a cast of allies and enemies. Depending on our behavior and our responses, we will make relationships evolve in a positive or negative way, going to influence the plot.

From the narrative point of view, the first season is probably the one that offers a greater variety of situations, but losing some points regarding the creation of the background of the characters. The third season, A New Frontier, proposes the best main core of protagonists (thanks to a good number of flashbacks that go to define his personality) but he loses many points as regards the secondary characters, both allies and enemies, barely sketched and often not very credible. Also, the third season is slightly detached from the adventures of what it is the real protagonist of the saga: Clementine.

In the first game she will be just a little girl to save, in the second season she will become a young girl and we will decide her future ourselves, while in the third, although present, we will not have control over the young woman but we will only see her gravitate around us, without that has the possibility of evolving in a particular way. The second season will be the best for many, as a result, as it will rise on the ashes of the first, but eliminating the bulk of its flaws.

Michonne it is instead an independent work, not very "useful" in the overall panorama, but excellently done as regards the direction and the choreography of the fights: sorry that the limited time available prevented some very interesting characters from evolving, especially in the group of " bad guys ". Lovers of comics will find all the psychological background linked to Michonne's daughters and will therefore be able to appreciate the work more. 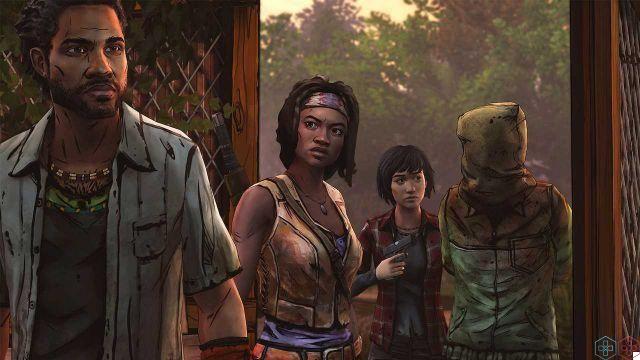 The Walking Dead Collection - review: who should buy it?

This collection is definitely the best opportunity to recover the complete package of the saga, especially in preparation for the arrival of the last season that will conclude the adventures of Clementine. The collection offers more than thirty hours of gameplay. The graphic enhancement is not a trivial matter, but those who have already lived most of the seasons (or even all) have no real reason to spend € 50 and replaying a type of opera that is by no means meant for multiple runs. On the contrary, those who have missed the whole saga to date, have no more excuses to postpone the purchase.

Trophy collectors will find a separate list of goals from those of the individual seasons, with only one platinum for the whole package. Unlike usual, there are a couple of missing trophies (within 400 days) but a simple episode reload will allow you to get them effortlessly.

The collection is available in PS4 (version we played) e Xbox One.

Thanks Premier Entertainment Arts Culture for giving us a review code.