Three ingredients are enough to create the perfect magic potion! Young alchemists, The Potion is your game and this is its review

The Potion is a game created by game designer Kasper Lapp, who in 2017 received a Spiel des Jahres nomination with the game Magic Maze, and distributed in Spain by Cranio Creations. The aim of the game is to be the first player left with only one ingredient in hand.

Dear alchemists, this is a truly essential game in its form and its components. In the end, only a few ingredients are needed to create an efficient magic potion, because the important thing is to know how to dose them well! Let's start from the package, all we need to play is inside a small plastic bottle and in it we find:

The plastic bottle, in addition to serving as a container for the components of the game, will also be used for playing. 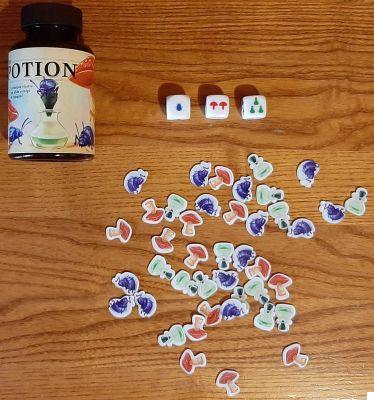 Setup and Regulations | Review The Potion

The following are the setup and the rules for games ranging from 4 to 7 players, later we also talk about the variant for 3 players.

Give each player two Ingredient signals per type, so two beetles, two mushrooms and two vials and the unused counters set them aside. Finally, place the plastic bottle and the three dice in the center of the table. The Ingredient tokens must be kept in hand throughout the game, so as not to show the opponents what are left there.

Rules and End of the game

The turn begins with a player having to roll i three nuts Ingredient, these dice tell us the type and quantity of Ingredients players must bet on. After seeing the results of the dice, each player must decide which Ingredient to play and must place it in the free hand without showing it to the others. When everyone has made their choice they can reveal the Ingredient they have chosen, all at the same time. The players who meet the victory conditions can discard their Ingredient by putting it in the bottle, while those who do not satisfy them take their token back and hold it in the hand with the others. The game continues like this, until a player is left with one or both of the signals of a single Ingredient which at this point he must show to his teammates to be declared. vincitore and the game ends. If multiple players win in the same round, the game ends in draw.

Ingredient tokens can be discarded in these cases according to these three rules:

When playing with three players, it is necessary to eliminate the die showing the trio of Ingredients and use only the other two, otherwise the rules remain unchanged.

The Potion is a board game that requires ingenuity and deduction as well as a bit of strategy. The dice are well made and do not look like they will deteriorate over time, the signs are made of rigid plastic and this is perfect as you have to keep them in your hand for the duration of the game. The rules are few, simple and clear. The matches are fast. Everything is contained in a small, very practical plastic bottle that allows you to take the game everywhere and to be able to play it practically anywhere. Cranio Creations has found the perfect recipe to create a perfect party game!

add a comment of Review The Potion: Little alchemists grow up