Review The Elder Scrolls: Legends, War of the Alliances

After a long wait, War of the Alliances finally arrives on The Elder Scrolls Legends, let's find out the details in the review

It has been a long wait for this expansion, but we have finally had the opportunity to deepen its dynamics. War of the Alliances brings with it a small revolution to the card game The Elder Scrolls Legends!

An Incredibly Immersive Title - The Elder Scrolls: Legends, War of the Alliances | Review

While it may not seem like a hugely innovative title, The Elder Scrolls Legends definitely is one of the best card games of recent times. We are facing a very classic scheme, with different classes of creatures and some particular abilities. The same are divided by type of attribute: Strength, Will, Agility, Resistance and Intelligence. You can form decks of 50 cards with two attributes or, using some special cards, form decks of 75 cards with 3 attributes. Decks can be built with cards from any set with a maximum of 100 cards.

Like any self-respecting card game we will have 30 health points but, unlike other titles, for every 5 health points lost we will lose a Rune by drawing a card. And here we have one of the unique mechanics of this game: the prophecy cards. When we lose a Rune we will be able to draw a card, if this has the “prophecy” ability we could play it immediately. In addition to this, the second unique dynamic concerns precisely the battlefield: these are divided into two impassable areas. For this reason it will be like playing two battles on different fronts within a single battle. Then there is a ring, equipped to the player who does not start the game, with the ability to give one more mana point for a turn: useful to avoid giving an advantage to those who start the game.


In addition to this, it presents the classic dynamics of cards with guard, equipment etc. Present the "Arenas". To access them you will need to buy tickets, and once inside we will have the opportunity to face other players (with higher prizes the higher their number of consecutive victories) or against the AI ​​that will gradually have greater difficulties. On the third defeat you will be eliminated from the arena and you will need an additional ticket to enter. Then there are several variants of the arenas that are available in particular events. Finally, the dubbing in Spanish impressed us very positively: excellent to say the least.

Since several years have passed since the release of the title, we wondered how it has evolved from a purely technical point of view. We found ourselves testing the PC version and we indulged ourselves with different platforms. Obviously we didn't have any problems on our main machine equipped with top-of-the-range hardware: the game is really light. We have installed the same on a laptop with a few years on its shoulders and even in this case we have not encountered any problems. 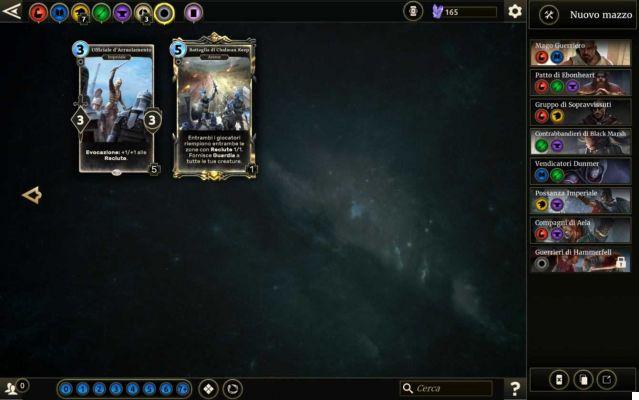 But at this point it came naturally to us to do one last test: how does The Elder Scrolls Legends work on a Windows 10 tablet? No sooner said than done, we have installed TESL on the baby Surface GB also finding here a simply perfect gaming experience with the plus of being able to take the device practically anywhere: train, plane, car (for passengers), bus etc. We've played TESL too much thanks to this possibility - having a desktop gaming experience on such a portable device is truly priceless. Kudos to the developers for making TESL that way flexible and well optimized!

Alliance War is not an expansion that changes the dynamics of the game. This just adds new cards to the game and some new dynamics. Among the most interesting introductions we point out "mobility sectors“, Which allows you to use equipment directly by assigning it to a 1/1 recruit (summoned for the occasion) thus avoiding that, in decks very focused on this type of cards, you can be left without the possibility of playing cards.

The dynamics "veteran, Which grants life and attack bonuses after the creature's first battle. The ability "specialty”Of some creatures, on the other hand, is activated following some particular events, such as having played actions, objects or supports. The latest dynamic introduced is "strengthening“, Ability that gives bonuses to creatures during your turn. The news, however, does not stop there. Among the new cards introduced there are tricolor card which complement the concept introduced with "Houses of Morrowind". These are in fact complementary, in terms of possibilities, with the tricolors of the previous expansion, completing the range of possible combinations with three possible attributes. 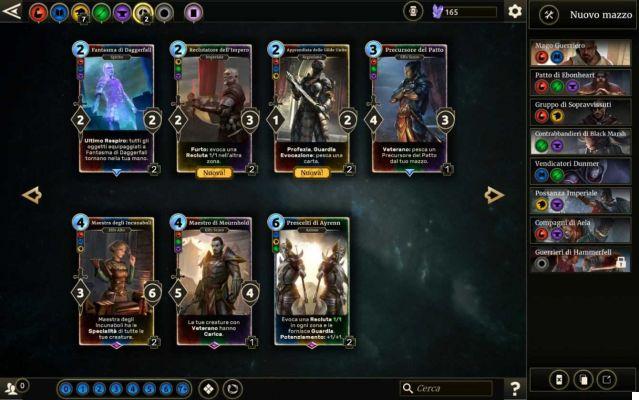 Thus new factions are born, precisely the "Alliances" that give the expansion its name. Although there are no new ideas in single player, the innovations introduced are noteworthy as they greatly expand the strategic possibilities offered by the title. This is an expansion aimed at further improving the game dynamics, a further refinement of a system that is now very solid and well structured.

These new additions greatly expand the possibilities offered regarding deck customization by opening the doors to new strategies. The new cards, even by themselves wanting to play them in "purist" decks they manage to give intriguing ideas but, when combined with the previous expansions, they even manage to have an extra gear. Without going around it too much, the most significant and impactful novelty is the introduction of the new tricolor cards. We had long awaited this introduction and we wondered why not to offer this possibility directly with “Houses of Morrowind”. 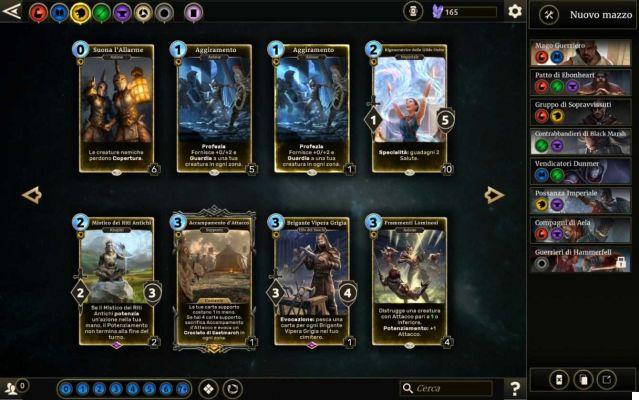 The tricolor decks are certainly the most complex to manage and study, but potentially, those able to give the most satisfaction: they are much loved by the players of this title. The other innovations introduced may seem, to a non-careful analysis, only a side dish. However, this is not the case as these are dynamics designed to make the new tricolor decks work and, above all, to correct some problems that had slowly killed some types of decks. With War of the Alliances many decks will be back on the crest of the wave now forgotten or overshadowed: the name of the expansion is really very apt. Which covenant will you create?

In conclusion, we were really satisfied with what he offered us "War of the Alliances". One of the best expansions ever that manages to revive many old decks and introduces new possibilities for gamers. TESL is an ever better game and with this expansion it is definitely in a position of advantage over its competitors. Purchase the new Alliance War cards - you won't regret it for sure!

Review The Gardens Between: simplicity and childhood ❯

add a comment of Review The Elder Scrolls: Legends, War of the Alliances