Review Stygian: Reign of the Old Ones, un’ode a Lovecraft

With this review of Stygian: Reign of the Old Ones we will shed some light on this obscure title. If you are a lover of games with a Lovecraftian atmosphere but still have doubts about this work, here you will find the answers to your questions

Stygian is a RPG with turn-based tactical combat it's a very strong narrative component. Our goal will be to track down the mysterious "Dismal Man", a grim figure who appears to be aware of the secret that plunged Arkham into the abyss. To succeed in our aim we will have to obtain information and survive the threats, human and otherwise, that infest the city, but above all we will have to try to stay sane.

The title of Cultic Games is set in the universe of HP Lovecraft novels. The author, for those who do not know him, in his books deals with incomprehensible extraplanar entities that have inhabited the earth and the stars for eons, well before the birth of man. These creatures are often worshiped by cults and influence the minds of humans for their own purposes, driving them insane. Inside the game it will be possible to find countless references to Lovecraft's works from the very first minutes: Cthulhu, Obed Marsh, Mi-go, Weird Tales Magazine and so on and so forth.

The game is set in Arkham, the famous city home of Miskatonic University which, following a mysterious event known as Black Day, has been entirely transported to a sort of parallel dimension. The city is in ruins and power was taken over by the mafia, who rules the city with an iron fist and lives in luxury while the citizens starve. In addition to the mafia, there is another great power in Arkham, the cult of Cthulhu, a group of fanatics who worship the Great Ancients by practicing human sacrifice and dark rituals. 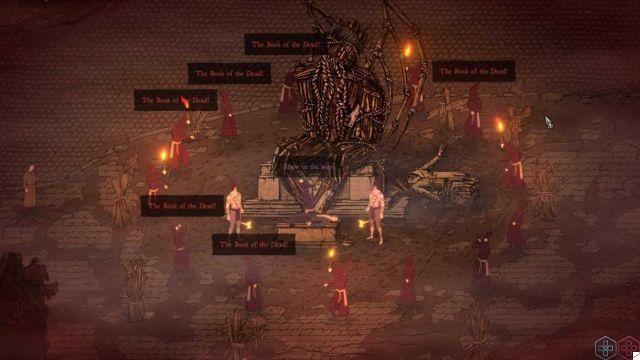 Born of a sick mind? - Review Stygian: Reign of the Old Ones

The art style of the game perfectly brings out the atmosphere of the Lovecraft stories. The game world is entirely hand drawn, in order to make the nightmare scenarios that we will find ourselves in front of as soon as they come out of the sketches of a madman; a very good choice to represent Lovecraftian scenarios. Also the audio sector is very good, with pleasant music and immersive ambient sounds. The only flaw is in the animations, which can be woody and overly simple. 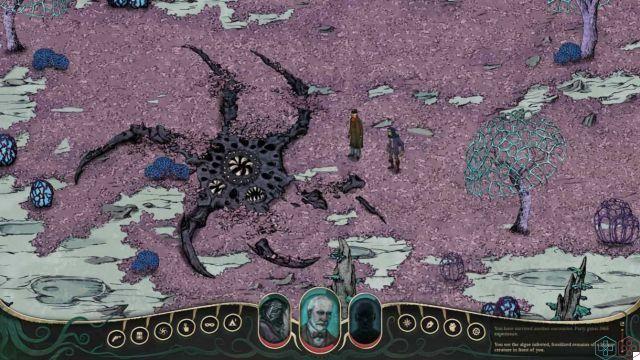 Time to Roll - Review Stygian: Reign of the Old Ones

In a game of this type where roleplay is essential, character creation is a very important element. Immediately after choosing the sex of our protagonist we will have to decide his age, which will affect our physical and mental characteristics. Are available eight professions specialized in different skills, for example the investigator will be very skilled in investigations while the occultist will be able to understand the supernatural. Each class can also choose between four different backgrounds, which will modify the basic characteristics or additional elements such as money and beauty.

In the game you will also be able to choose between six schools of thought, able to influence the way we play our character. A scientific figure will benefit most from acting rationally, while a materialist will always seek personal gain. This Belief System will allow us to identify ourselves even more with our character, helping us to maintain consistency between his actions. 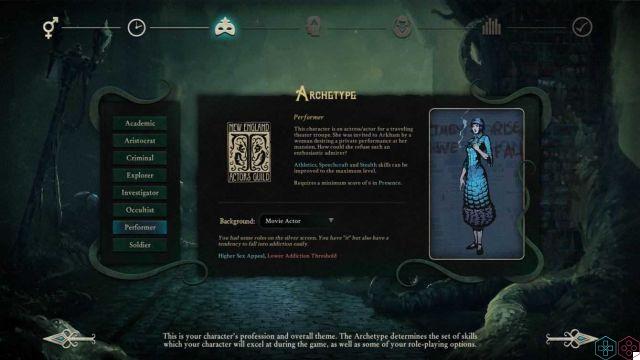 Sanity and Madness - Stygian Review: Reign of the Old Ones

With the numerous cosmic horrors that populate the world of Stygian, our character's mental health will always be at risk. There sanity it can be reduced by disturbing events, enemy attacks, or it can be spent on practicing the dark arts. It is possible to find some relief for the mind by resting, or by reading a book, but if this is not enough you can always resort toalcohol and drug use, however, at the risk of becoming dependent on it. If our health drops too much, we risk running into terrible afflictions such as schizophrenia or psychopathy. These alterations will cause various effects such as hallucinations or outbursts, but the biggest problem will be during the dialogue. If you have any of these conditions some dialogue options will be replaced by delusional phrases, which will have different effects on conversations.

If our health points drop to zero out of combat, we will start earning punti FEAR (distress). These points accumulate every time you witness particularly distressing events and at the end of the fighting. Once we get enough points our ANGST level it will rise, forcing us to choose gods permanent malus for our pg. These negative effects can range from reduced stats to greater loss of sanity based on certain choices or actions. 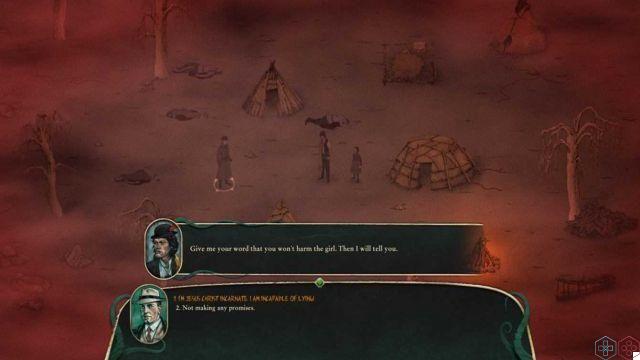 Dialoghi e roleplay – Review Stygian: Reign of the Old Ones

The main component of Stygian: Reign of the Old Ones are the dialogues and during the game we will spend a lot of time reading them. The conversations between the characters are very well written, they manage to immerse you completely in the story and vary depending on many factors. The most valid aspect of the title is precisely the great choice that you have during a conversation. It will be possible to say different things depending on one's gender, mental state, class, background and ability. Even in some cases it is possible to formulate the same sentence with conviction or lying, an important detail to better interpret your character, but which is often overlooked in this type of game. To underline even more the importance of the dialogues, there is the fact that it is often possible to arrive at a game over even making bad dialogue choices and not just being defeated in combat. 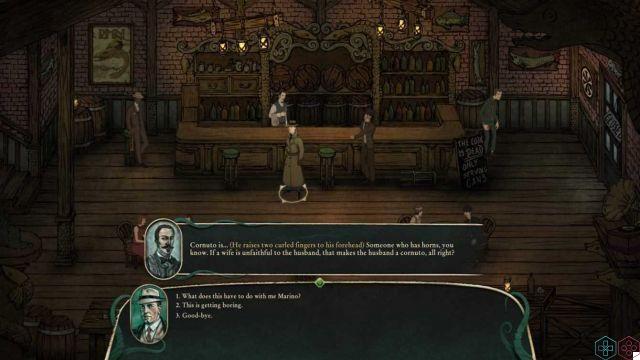 Forza, combattiamo – Review Stygian: Reign of the Old Ones

Stygian's turn-based fights are very simple, and are reminiscent of those of Heroes of Might and Magic. During the clashes we will use our protagonist more two other companions that we will be able to meet during the game. Once in combat, the turns of characters and enemies will be decided based on the value of the reaction stat and will be able to move, attack or perform other actions based on their Action Points. In addition to sidearms and firearms, if you have the right characters you can also make use of black magic.

The magic it is used at the cost not only of AP (action points) but also of SP (health points) and often other material components. These spells are very useful but should be used with caution to avoid straining the psyche of the caster too much. In combat, it is possible to end your turn early and convert the remaining APs into defense or accuracy bonuses, but it is also possible to escape if the situation becomes too dangerous. These gameplay elements, however, after a short time begin to become repetitive and in the long term they risk boring players, who will often find themselves repeating the same strategy. 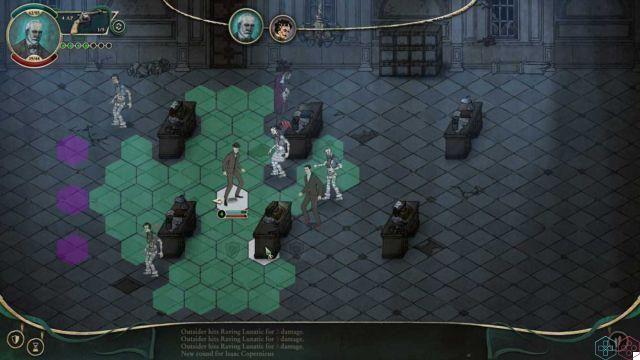 A few too many flaws - Stygian Review: Reign of the Old Ones

Stygian: Reign of the Old Ones is a very light game, but sadly we encountered various bugs during our test. For example, sometimes it was impossible to reunite with companions after they separated, while other times their weapons disappeared. In some cases during the adventure, it happened that some game prompts got bugged preventing us from interacting with them using the mouse. Initially this issue rarely happened and could easily be solved by restarting the game, but as it went on it got worse and worse. Even in the final stages of the game the bug had become so serious that it showed up every time you tried to use an object from the inventory or a skill in combat, even going to block the interactions with the game menu preventing us from going out normally. 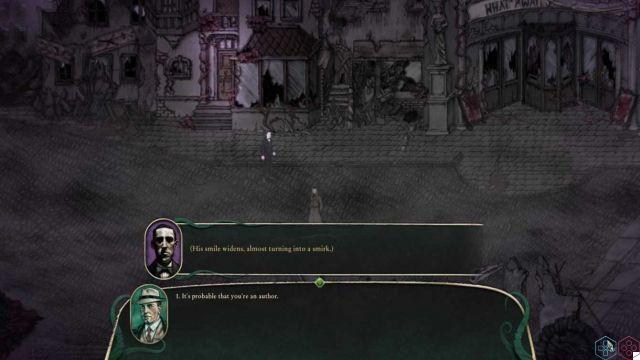 Despite theimpeccable narrative sector and the numerous roleplay choices, Stygian: Reign of the Old Ones it sins a lot when it comes to fighting. Although there are some elements that can give variety, the fights will not require particular strategies and can all be faced in the same way. Unfortunately our test was peppered with numerous bugs, which greatly damaged the experience. If you are a great lover of Lovecraft and you like games with a strong narrative component this title is the one for you, but perhaps before taking it you should wait for all the various bugs that afflict it to be fixed.

Stygian: Reign of the Old Ones è available from today 26 September on PC. If you found this review useful and want to stay updated on all the news regarding this title and much more, keep following us here on techigames.

6.5 For lovers of Lovecraft

Suicide Guy Review: those who (not) die see themselves again ❯

add a comment of Review Stygian: Reign of the Old Ones, un’ode a Lovecraft