Get ready for an adventure that will take you to explore five mysterious uninhabited islands to survive a shipwreck. But will it be worth it? Find out with our Stranded Sails review

Stranded Sails is a new title recently landed on all consoles and on PC, developed by the guys from Lemonbomb Entertainment. The genre of reference is the same as the various Stardew Valley and Harvest Moon, titles from which he draws a lot of inspiration. Sara available from today Thursday 17 October for all platforms. In fact, in the game our character will have to manage the life of your camp, improve it, build vegetable gardens with which to feed oneself and one's companions, go fishing and procure all the resources that the surrounding environment offers in order to survive.

How sweet it is to be shipwrecked

Stranded Sails will see us playing a young boy (or girl, depending on the sex we choose) on his first adventure at sea. In fact, the title opens with the beginning of an expedition led by our father, Captain Charles. The ship on which we will embark together with eight other companions has the task of reaching a distant land to the north. But something goes wrong during the journey. A terrible storm takes the ship by surprise. The wind and the raging waves overwhelm it. Our protagonist thus wakes up on a beach, alone. Around him only the remains of the sailing ship he had embarked on together with his father and all the crew.

Thus began our adventure. Our task will be, at least initially, that of find all the missing members of our crew and organize ourselves to survive. We will have to find the right place to settle in order to try to build a village. It will be necessary to bend the islands, wild and uninhabited, to our needs, finding the provisions and tools necessary for our needs. It will soon become clear that the archipelago on which we have been shipwrecked is hiding many mysteries. Will we be able to survive and discover all the secrets of the islands? 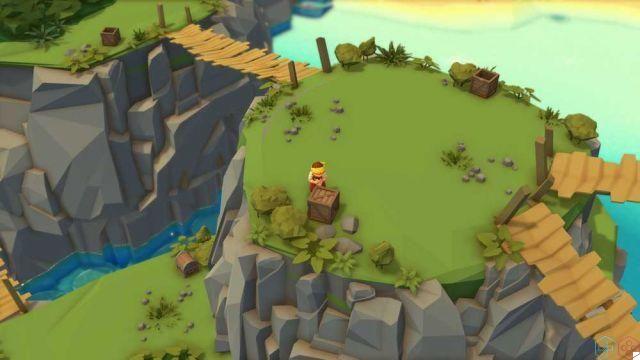 A Game That Takes You By The Hand - Stranded Sails Review

As soon as the game starts, you immediately realize how much he has drawn heavily from other similar titles. From the very first steps it is evident the debt that the guys at Lemonbomb Studio have incurred towards games like Stardew Valley, Harvest Moon or Farm Togheter. The game right away takes you by the hand, guiding you during your first steps. The various phases that will lead the player to prepare the camp for the crew and to obtain the first fundamental resources, are all fully explained.

There will be missions to build the garden and start cultivating, while others will teach us to look for wood and build huts for our companions in misfortune. There will also be advice that the game will provide us to complete our tasks in the best possible way. The progress of the adventure is extremely guided, punctuated by missions to be done in a precise order. While this may be useful for a novice player, the little freedom afforded could make the title pretty boring. 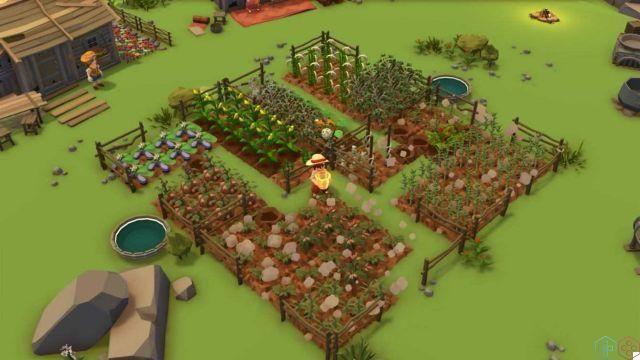 We immediately understand that the title immerses us in arelaxing environment. There are no real threats to our safety, the only thing that can "hurt" us is there fatigue. An energy bar, placed at the top center of the screen, will decrease with each of our actions. It will be possible to refill it by eating. However, even if it runs out there is no need to despair. Our character will pass out and wake up near his bed at the camp. There are no penalties, you will not lose the collected items or similar. Indeed, it is possible to take advantage of the protagonist's fainting to collect as many materials as possible in our exploratory phases.

Also 'alternation of day and night they will not affect our health. Exploring on a sunny day will not provide any advantage over doing it in the middle of the night. In the second half of the game we will be given a weapon and a basic combat system will be introduced. Also in this case there will be nothing particularly complicated and winning the battles will be very simple, but it is still one game mechanics variation extremely appreciable and pleasant.

Cooking and Fishing, the Fundamentals of Survival - Stranded Sails Review

One of the tasks that will keep you busy the most is the kitchen. There are two methods to cook in this game. The first involves preparing some rations that you will consume yourself and that you can carry around during your wanderings. There are different recipes possible depending on the ingredients you have available. Each time you collect a new item to use in the kitchen, you can try your hand at a mini-game that will allow you to discover the dishes that can be prepared with the new ingredients.

It will be good to take the right time to discover all the recipes and the various ingredients, since the greater the rarity and the number of ingredients you insert in a recipe, the greater its effectiveness once eaten. The second, on the other hand, is the prepare a stew for the crew, assigning each member an ingredient. If you guess his favorite ingredient you will receive a prize, usually an upgrade of an item or a blueprint to make improvements to the village.


La fishery it is extremely useful for the kitchen and for unlocking increasingly effective dishes. One of the first tools that will be provided to us is a rod to be able to capture the various types of fish that inhabit the seas in which we have been shipwrecked. Sara essential for unlocking and cooking useful dishes try to catch as many fish as possible. We will have to try all the fishing areas that we will find, we will recognize them since concentric circles will form on the water, and find the most profitable for the recipes we have in mind. Some fish that are particularly difficult to catch will allow us to create dishes that, in addition to making us recover our energy, they will also provide us with bonuses for performing certain actions consuming less stamina, such as farming or fishing. 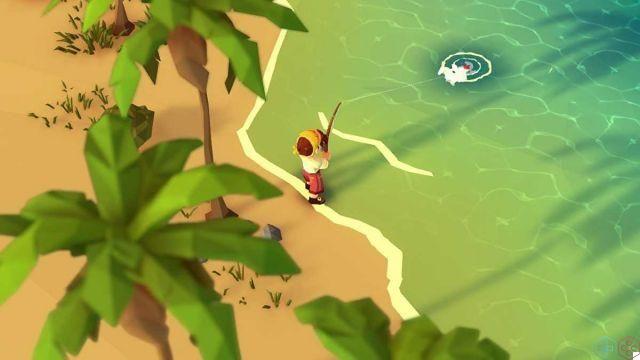 Exploration, the heart of the experience - Stranded Sails Review

Exploration is the central node of the whole adventure. To find the missing crew members and to find more and more objects and ingredients, it will be necessary visit all the islands that make up the archipelago on which we have been shipwrecked. These are five, but one will be accessible only in the later stages of the game. Each island is different from the other, both for fauna and for vegetation and geography. We will move from one mainly sandy island to another that is covered for the most part by a dense forest.

Still another will consist mainly of thick mangrove patches emerging from the sea. On an island, however, we will come across an abandoned village and mine. Carefully sifting through the various islands will also be possible discover the history of this archipelago. Tablets bearing extracts of ancient legends will tell us about the events that occurred on those lands in ancient times and will allow us to shed light on the mysteries that surround them. The exploratory phases, the ones in which we will get on our rowboat and venture out to discover the secrets of these islands, are undoubtedly the most successful in the game. They drop the player perfectly into the atmosphere and setting of the title and are always fun and satisfying to complete. 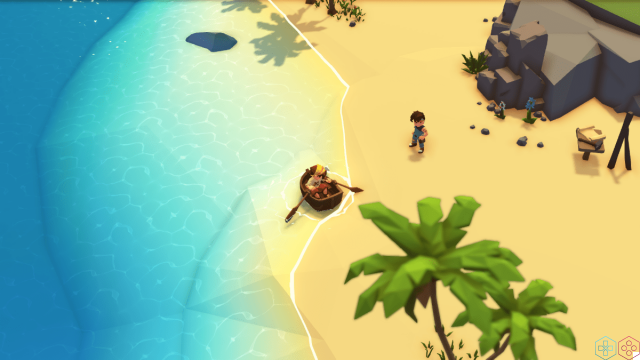 The game uses the Unity graphics engine. This results in an almost cartoonish visual impact. However the game it does not show particular inspiration from an aesthetic point of view. The islands and settings, however nice to look at, are still quite enough flat and not incisive. Slightly better the character design, but still don't expect anything memorable. Good instead music, almost always spot on for the situation and that let you immerse yourself in the game atmosphere. Using Unity and a simple, stylized style allows the title to have a solid technical sector. During the more than 20 hours of testing the title, there was never any failure in the level of fps during the gameplay.

The only moments that have defects from this point of view are the sections of navigation in the open sea. Sometimes it may happen that the game seems to freeze for a few moments while you are busy paddling particularly offshore. However, these are not always the case small freezes and it has never happened while we were on an island, whatever the activity that saw us engaged. 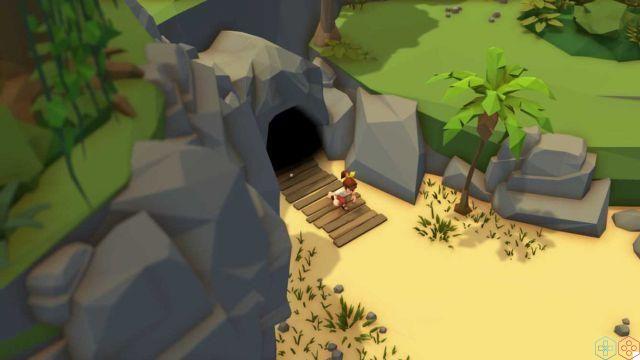 Stranded Sails: Explorers of the Cursed Islands è un titolo che it will hardly leave a mark or it will remain etched in the memory of the players. The basic structure is extremely simple and recalls much more famous and long-lived titles and series. However, the title has a 'very special setting and allows us to immerse ourselves in one story, simple but intriguing, which is the perfect backdrop to the gameplay. The introduction of combat mechanics in the second half it allows Stranded Sails to vary a little the basic formula, just when boredom might start to set in. About 15 hours necessary to complete the main story will flow smoothly, in complete relaxation.

If, on the other hand, you want to carefully explore each island, gathering as many resources as possible to expand the crew's camp more and more, the game could even last 25-30 hours. However the replay value is extremely low. The very guided and linear progression of the title will hardly lead players to lose their hands once it is finished.

We hope you found our review useful, keep following us for other reviews and to stay updated on the world of video games.

add a comment of Review Stranded Sails: Explorers of the Cursed Island