SteamWorld Quest: Hand of Gilgamech, a card game with a medieval-steampunk setting, is finally available: here is the review

The world of indie video games is often characterized by a certain amount of courage. If the panorama of AAA must, to avoid economic risks, focus on genres, ideas and mechanics tested and easily "salable", indies have the opportunity (and actually the need) to surprise audiences with new ideas and, more generally, they can afford not to become fossilized on a single style. When it comes to courage and variety, however, among the various independent software houses, Image & Form Games, the Swedish group that gave life to the SteamWorld universe, cannot fail to rise.

Became famous in 2013 with SteamWorld Dig (but already working on the IP since before 2010, with SteamWorld Tower Defense), Image & Form Games has rightly decided to focus on the interesting steampunk universe much appreciated by the public. In doing so, however, he decided not to limit his imagination, in practice revolutionizing the world they created from game to game. SteamWorld Dig has a western setting and sees us as a miner trying to go deeper and deeper, with procedurally generated levels. Next, the Swedes created SteamWorld Heist, a turn-based 2D strategy game set in space. With SteamWorld Dig 2 they returned to the Far West, but they focused on the metroidvania genre. Now, with SteamWorld Quest: Hand of Gilgamech, Image & Form Games moves into a robotic medieval fantasy, with an RPG card game. Let's see if they once again hit the mark in our review. 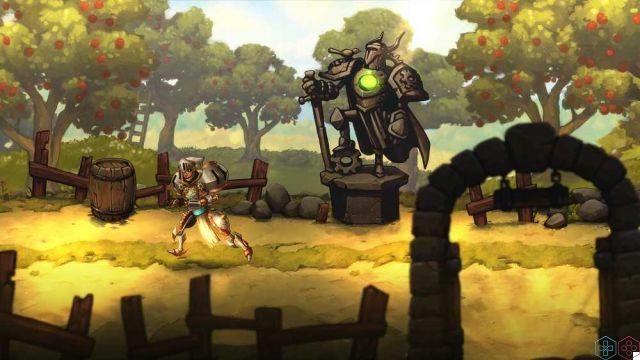 SteamWorld Quest: the heart of the cards | Review

SteamWorld Quest: Hand of Gilgamech tells the story of a handful of makeshift heroes: the initial group, which will expand with the advancement, is led by Armilly, a warrior of humble origins who dreams of becoming a heroine and who follows to the letter the dictates of the book of heroes, which will tell about Gilgamech, a great warrior of ancient times who defeated a colossal beast that wanted to devour the whole world. Armilly is supported by her alchemist friend Copernica, devoted to knowledge and practical. Finally there is their friend Galleo, a kind of gentle giant.


The trio begins their quest in search of the heroes of their village, kidnapped by a dark army. The journey will take them to many places, to discover themselves and a great threat, which they will obviously have to eradicate. The narrative is quite simple and there will never be big surprises, but the characters have their own reason for being and know how to evolve from act to act.. The plot, in a nutshell, is enjoyable enough to give us reason to go through with it.

The game is divided into chapters and each of them is made up of a series of 2D “rooms” connected by passages. Enemies appear on the screen and, to start a fight, just touch them (or hit them with the weapon, to inflict a small initial damage). Obviously what interests us most is to take the field and fight, through our cards. Each character, in fact, is equipped with an 8-card deck that will mix with that of allies. At the beginning of each round we will draw until we have seven and we will have to play three. Each card can be used to attack, activate bonuses or penalties, heal or perform special hits. The opponents will have their own weaknesses and resistances, so it will be worthwhile to field the best characters and compose their decks by thinking about the types of enemies we face.

The combat of SteamWorld Quest manages to keep fresh throughout the adventure: by opening chests and through a merchant, we can regularly obtain new cards and, in addition to the starting three, two characters will be added who will propose new ways to approach combat. In this regard, we must admit that a sixth PC would not have spoiled at a playful level, although at a narrative level those present are more than sufficient. The interesting part of the fights is that it is possible to create combinations of cards: if in a turn you play three of a single character, the special ability of his weapon is activated (we'll talk about it shortly), while some cards have extra effects if used after that of a specific ally. Each turn, therefore, is always lived with a strategic eye, to optimize attacks.

As you advance you get new cards, we said, but also equipment that improves the characters' stats. Mainly we will find them at the merchant who, in a comical way, will follow us around the world, reaching the most absurd places with her cart. The most interesting part, however, is that we will be able to forge new cards and upgrade the ones we already have, mainly by spending money and materials obtained from clashes with enemies (which will also give experience, useful to make us level up).

SteamWorld Quest: Hand of Gilgamech is not a particularly structured game, but it is extremely refined. The characters have varied decks and the limited number of cards that can be used during the clashes allow you to revolutionize the clash-to-clash approach, also depending on who is on the field (and therefore the combos that are created).

On a technical level, the game is well done: the environments, cards and characters have an excellent style that mixes fantasy with steampunk. The work has the texts in Spanish, while the dubbing is the classic robotic groan. SteamWorld Quest is also a fairly long-lived work: to complete the game it will take about twenty hours which can increase if you decide to do some backtracking to recover the lost chests. The re-exploration is quite quick, as the characters get very strong in no time. Finally, there are a series of tournaments that will see us defeat groups of enemies one after the other without pause. In total, it will exceed twenty-five hours. The review was carried out in the Nintendo Switch version, the only one currently available: later the game will arrive on other platforms.