Let's take a closer look at a very interesting roguelike. In this review Sparklite will surprise you despite some easily ignored flaws

Sparklite is the first major project for Red Blue Games. The team comes from very different experiences, for example there are those who have worked on Earth Defense Force: Insect Armageddon and who comes from the world of the Web Industry. However, for four years they have been on their own, with the desire to make something they really like. The initial idea was a classic action adventure, as we see so many. The end result, however, is an interesting one mash-up of elements typical of The Legend of Zelda, to others from more modern rogue-like. However, if you are not a lover of the latter genre, Sparklite in this review will surprise you.

Rescued and taken to heaven

After an initial crash with his own flying ship, To give awakens rescued by the inhabitants of the land of Geodia. The latter live in a floating village, sheltered from the disasters caused by the infernal machines of the Barons. Sparklite, the great blue mineral that maintains balance is in danger. Ada will have to defeat the enemies of the earth and restore peace.

The premises of the plot are very simple and will remain so even in the development and until the end. It is a game that narratively does not surprise, preferring a plot already seen and tasted in many other sauces. The characters at first glance are charismatic, but slowly fall into the same simplism of the narrative. Their dialogues are often too short and generic. The scholar is just a scholar, the seller is a salesman with the exception of a few characters who will be seen too briefly. 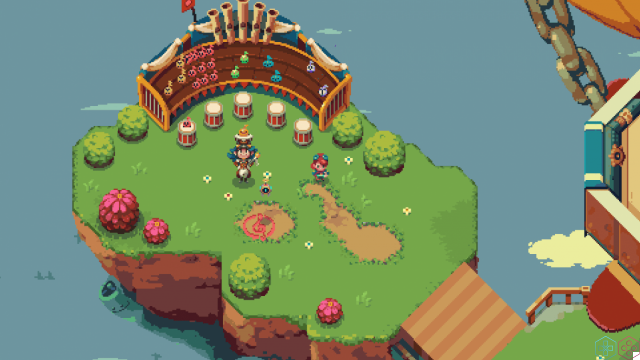 As soon as we are determined to save the land of Geodia, we will be able to descend from the sky and start the actual game. We will initially find ourselves in a verdant map full of leaves and vines. The environment is procedurally generated, that is, every time we go down from the village, the layout of the pieces that make up the map will be different. However, it is not totally random, the game has in fact pre-assembled rooms that we will face again with different prizes or dangers.

After cutting tall grass and depriving the trees of their fruit (it is good practice to do so in every Zelda-inspired title) we will face the first enemies. Our weapon is a wrench, which we will use as a sledgehammer and it will turn into a hammer when the shot is loaded. The feedback of the shots is very pleasant and makes every little challenge a pleasure. The latter is very important because we will find ourselves in farm very often search for Sparklite nuggets, purchase upgrades or expand the floating village. This is the fundamental currency in the game, each defeated enemy, open chest and completed mini puzzle will reward us with some coins.

If greed has not completely absorbed us, we can continue as we please but within certain constraints. As in a classic The Legend of Zelda we will be able to continue in the next area only after defeating the boss of the map, in this case one of the Barons. 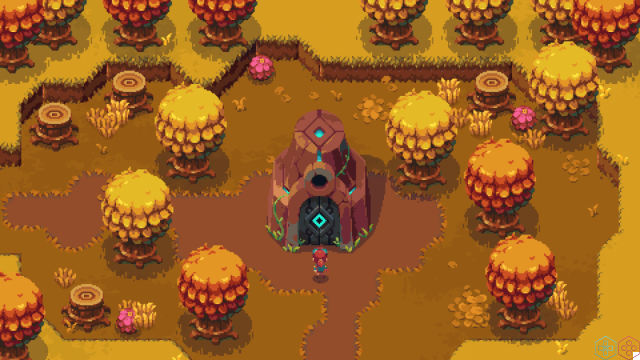 The strength of Sparklite lies in the "lightness" it offers us. Generally for a normal rogue-like death is permanent, leading to having to restart the game with the almost total loss of all progress. Red Blue Games instead offer us one semi permanent death, which will make us keep almost all of our progress. Each upgrade, sparklite and gadget obtained we will be able to keep them even after death, losing only the consumable items and some progress of the map. Defeated bosses and the opening of adjacent maps will remain so. At the point of death we will be recovered and brought back to the village.

With a few exceptions, the dangers that will normally be encountered in the map will not slow down the progression. Most enemies are easy enough to defeat with just a few hits and good reflexes. However i Baroni they are a separate chapter. This last represent the real challenge in the game and can seriously put even the most experienced players in trouble. The bosses in fact have a lot of life points and inflict a large amount of damage, in addition it will happen that the player's skills are not very influential. The sometimes exaggerated tracking and the random positioning of the shots, could make some normally effective dodges impossible. Fortunately, it happens not often. 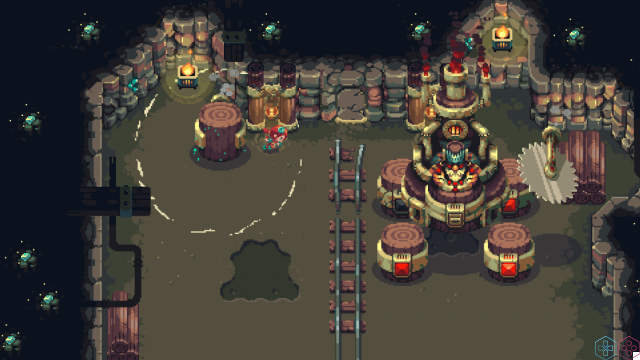 We will have various systems available to help us. The most useful is certainly the one formed by Patches that is, passive power-ups, which can be found in the world of Geodia, or purchased in the village shop. In addition to this we will find some objects for active use scattered throughout the game, the only tools that we will lose forever in case of death. The element that brings Sparklite closest to a Zelda are the Gadget. These are equipment that we can keep permanently, obtained in some very short dungeons. Their use is unfortunately of little value and only to overcome some small optional puzzles.


Ada's adventure will then be accompanied by a small robot / drone. By taking control of it, we will have some useful tools at our disposal. Its main utility lies in the ability to activate co-op, a mode that allows a second player to control the drone. 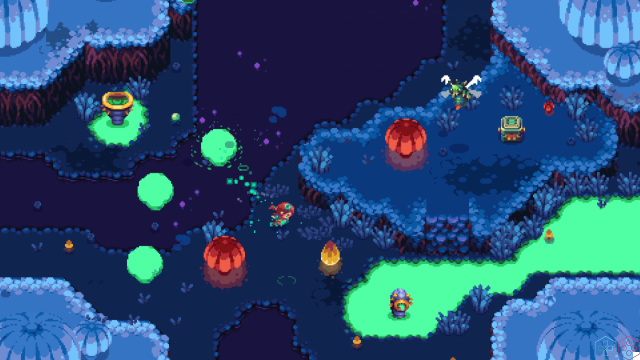 Our adventures will continue through five environments, each with their own color palettes and original monsters. Aesthetically, the game shows us very careful and fluid animations for every occasion. It is a pixel-art that takes inspiration in a more modern style, finding references to the Game Boy Advance era. The colors are vivid but hardly tiring. The monsters are well placed in context and very cute. Also the audio sector fully satisfies with subtle references to some of Zelda's music. An unusual lack of music and sound effects will happen only on occasion.

This game may not meet the graces of the most hard core gamers. Nonetheless, in its simplicity and immediacy, it represents a good compromise for those who do not tolerate the burdens of permanent death. Sparklite despite being a roguelike has a very limited longevity, the adventure in the review ended in just 8 hours (it could last even less). It is a fun game and it will be difficult to detach yourself from the screen at times. It's not a flawless title, but nothing to spoil an overall enjoyable experience.

Sparklite is available for Nintendo Switch, PS4, Xbox One and PC. Keep following techigames to stay updated on video games, series and technology!