Shadow Of The Colossus returns to Sony consoles 12 years after its European debut. The title has been translated into multiple versions, we have seen it on Sony's second console and found it in a collector also on PlayStation 3. Now that it has also landed on PS4, we can tell you whether or not it is worth buying this version!

Before starting to review a title of this artistic stature, it is good to make some premise. The review of Shadow Of The Colossus you are reading will focus on its new version and not on the game! Although of course we will evaluate how and how old the game has aged and how old its mechanics are.

Shadow Of The Colossus, for those unfamiliar with it, is a title of Fumito Ueda author of the most recent The Last Guardian and Ico. The video games of this fantastic artist are journeys into human feelings. Each video game produced by Ueda is an introspective and emotional journey. The videogame we are talking about is no exception, which tells a story of love, death and despair. The words you have read will be the only ones I will use to talk about the plot of the game, as mentioned earlier in this article we review the work done to bring this title back to modern standards. As for the game itself, suffice it to say that I consider it a cornerstone of the videogame!

Shadow of the Colossus: can you play such an old title?

A few days before receiving a copy of the game, I was discussing with a colleague in the editorial office about how much a video game can “age badly”. The title considered at that time was Kingdom Hearts (from the link you can read a wonderful special on the complete plot). We were well intent on discussing how much a title could still be playable after many years or less, in this paragraph we will see exactly this: how it has aged Shadow Of The Colossus?


The mechanics of the videogame in question are also simple if we want to: follow a path, find the enemy and defeat him ... it might seem like a banal videogame that was fine at the time of PlayStation 2 where many mechanics had not been explored! In fact it is so, the mechanics of this game are trivial, obvious and repetitive, but Shadow Of The Colossus has an ace up its sleeve that makes it wonderful: its game design.

The climbing system, which is necessary to continue, is by no means innovative! Indeed it could be frustrating at times. The shortcomings of a latest generation physical engine are felt, but the way in which it is necessary to steal every juncture of the climb or the battle to rise as a savior and join one's destiny is unrivaled. Each jump, fall, climb, sword thrust or arrow thrown will be a small part of a majestic and commendable emotion.

The camera has some problems, but in conclusion if you are afraid of the age of the title and its interactions, you can rest easy. Shadow Of The Colossus is still a great game even today and his interactions, although often limited by age, still know how to surprise. 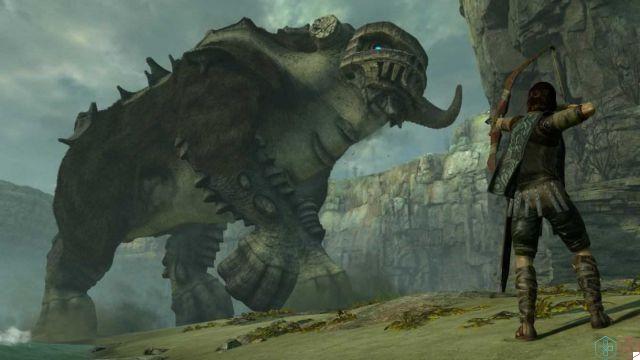 The work done to revive this title is in no uncertain terms masterful. The cleanliness of the textures, the work done on lights and shadows is wonderful, but there are some small defects!

Seeing the giants in this new version is something indescribable, the fur and the details that make up our opponents, such as the polygons that make up the protagonist and Agro (his faithful steed) leave you breathless. The same can be said for the settings which, while remaining (at times) "flat", enjoy a second youth.

Going through the sand dunes, the rich vegetation or between the ruined cities is something that alone is worth the price of the ticket. The strength of this adventure is the journey and not the destination, whether we are talking about the plot or gameplay, the discourse does not change.

The road you take to reach the next enemy is already the pride of this video game, then reaching the boss on duty you reach the apex of majesty. The possibilities offered by PlayStation 4 give, perhaps, what the game wanted to offer but could not on more technically limited consoles. More than once I found myself not following the correct path, enraptured by the movements of the horse leaving perfect hoof marks on the sand.

This new version also offers PlayStation 4 Pro owners the ability to choose whether to play with one resolution of 4K or whether to keep the Full Hd (1080p) and enjoy the 60 FPS. For our part, we have chosen the greater fluidity and the result has been to have more dynamic and exciting battles, enjoying a much higher resolution than the original one.

All that glitters is not gold!

In the majesty of the settings, however, there is a little big drawback. If in the original version of Shadow Of The Colossus it was unthinkable to see the textures of vegetation or sand (at least not so well) in this remastered you can enjoy these fantastic facets, but not without paying a price. A continuous pop-up effect is present in all open environments (practically always). This effect causes the textures to load in continuous delay and only as our presence approaches. If you use Agro, then you will travel more road in less time, the effect will be even more pronounced. What is certain is that such a defect is not able to affect the quality of the title and could (to a less attentive eye) even seem a play of light and shadow.

You can see the effect I'm talking about in this little piece of gameplay recorded specifically.

Shadow of the Colossus: who should buy it?

As mentioned, I consider this videogame a milestone in the videogame medium. If you haven't played it yet, I highly recommend that you retrieve it, but if you have already tried one of the past versions you will have to decide whether to relive this adventure in this improved graphics. As mentioned, the title has aged well and the work done on the technique of the game is much more than good. The budget price is certainly an added value that should not be underestimated.

I really recommend anyone who keeps a good memory of the title to give it a second youth, also because titles of this caliber give different emotions when played at different ages.

Shenmue III review: a nostalgic return to the east ❯