After Above and Below and Near and Far, are you ready to return to the Arzian lands? If you are curious about what new adventure awaits you, read the Roam review

Ryan Laukat, game designer and creator of successful games such as Eight Minutes for an Empire, once again takes us to the Arzian lands, the same setting as Above and Below and Near and Far. Like the three games just mentioned, Roam is also distributed in Spain by dV Giochi and is present in the news for May 2020.

For the uninitiated, the Arziane lands are the cradle of ancient civilizations. Inexplicable wonders occur in their territories and are populated by bizarre creatures and valiant adventurers.

The inhabitants of these lands have been hit by a disease that forces them to wander for kilometers aimlessly doing extravagant activities. Our task is to wake them from their hypnotic sleep and let them help us to find other adventurers to save.

What we find in the box | Roam Review 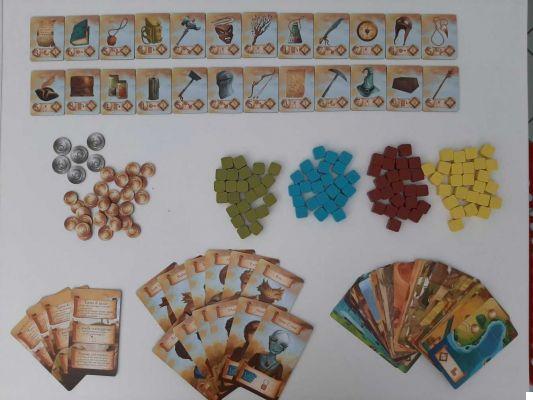 We must then shuffle the Territory cards and make a deck (the Territory card must be visible), from here we must draw six cards that we will arrange in a 3 X 2 grid in the center of the table and always with the Territory visible. We must place the cards close together, which must touch each other without spaces in between to form what will be the game map. On the bottom of the cards there are scrolls, these must be on the outer edge of the grid.

Each player must then line up his three Starting cards near one side of the map.

As for the coins, they must be kept next to the map in a general supply. The second and third players start playing with one coin, while the fourth player starts with two.

Finally, the starting player is chosen who will have to take the Summary card that has written “Starting Player” above, as well as the first player, the others also receive a Summary card.

How to play | Roam Review

Our Customers two game modes, That introductory and that standard. The difference between the two is that in the first, the artifacts (they are stored in the box), while in the second they are used.

During your turn you can do the following:

The won card must be placed in front of us turned to the side of the character who becomes part of our group and we can use it whenever we want. We must give the opponents their signals and replace the missing Territory card with one taken from the draw pile.


For each card that we don't win, but on which we have at least one token, we take a coin from the supply.

Here we will go to use artifacts. We need to shuffle the artifact cards and place four face up next to the map.

At the end of the turn it is possible to buy one of the artifacts (the cost is indicated above the card). The missing artifact is replaced with a new artifact. You can have as many as you like, but you can only buy one per turn.

Artifacts give you special powers, you can only use them during your turn and you can use as many as you want.

The points of the artifacts that you have are counted towards the end of the game.

The game ends when a player has a total of ten characters, the current turn is finished and then the points are counted and whoever has the most wins. If there is a tie, whoever has more coins wins and if the tie persists then the victory is shared.

There are two variants:

What I think of Roam

About Roam I like the fact that for some it is the return to a world already known and for those who have not yet played Above and Below and Near and Far, I think it is the right starting point to explore a part of the Arziane lands.

It is a simple game both in setup and in the actual game. Personally I found that the regulation was written in a too convoluted and at times repetitive way, which makes it difficult to schematize it to make it more understandable. I tried a couple of two-player games and liked it, but I think 3 or 4 is better and the game has more bite.

7.5 A pleasant return to the Arzian lands

add a comment of Review Roam: return to the Arziane lands