Review Ori and the Will of the Wisps: un ritorno spettacolare

We have been waiting for it with awe mixed with hope: is Ori and the Will of the Wisps able to match the beauty of its predecessor? The answer can be found in our review

When you create a masterpiece of technique, art and composition such as Ori and the Blind Forest, the sentence always hangs over you: will you be able to do just as well with the sequel? Yet perhaps in this case the answer to the question was not so difficult, given that we are talking about Moon Studios. The Austrian development house already had all the credentials to match the success of the first game, thanks to which, among other things, it had earned the award for best debut at the Game Devolopers Choice Awards.

Touching story, strong artistic component and inspired developers were just some of the key features of Ori and the Blind Forest's success. And his sequel? Can it hold its own? Well, you just have to read on to find out.

A journey in search of oneself

The story of Ori and the Blind Forest was touching in its simplicity. How not to become attached to little Ori, a guardian spirit lost during a storm? At his side, Moon Studios had taken us on an exciting journey to save the Nibel forest and its inhabitants, giving us hours of challenge mixed with moving intensity. Now The Will of the Wisps recombines known ingredients with new elements capable of touching the sweetest strings of our heart. 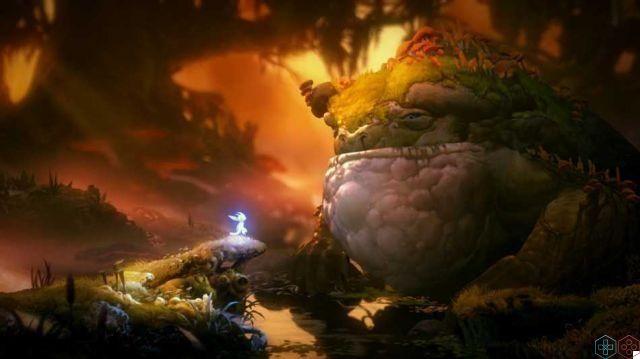 New storyline, same intense emotions - Review Ori and the Will of the Wisps

In this second episode we find Ori and Naru, but we also meet little Ku, the little owl daughter of the fearsome Kuro. She is the key to our adventure and it will be to help her that we will abandon the safe shores of Nibel to enter far more gloomy and frightening scenarios: Niwen Forest.


A place once flourishing (and here we find the main theme of the first game) and now devastated by a new, fearsome, threat. Helped among others by a group of sweet creatures called Moki, we will have to work our way between poisonous waters, distressing darkness and bleak desolations, in search not only of Ku, but also of a cure for this new forest ravaged by evil.

Ori and the Will of the Wisps ci porta a scoprire new fragments of the world of Ori and new inhabitants, alas, not all of them really friendly. Our little guardian spirit will be put to the test again, as will our ability and emotional stamina. And yes, because if The Blind Forest had made us move, The Will of the Wisps crushes our soul, scrambling it mercilessly.

Courage, friendship, spirit of sacrifice: these are the heart of the story of Ori and Ku, and it will be hard to hold back the tear that continually threatens to break our composure. It is also difficult not to notice the numerous metaphors and constant references to the real world; in fact, this second chapter also seems to want to push us to reflect, and to ask ourselves how much of what we have learned along the journey to Niwen we can bring with us in real life. 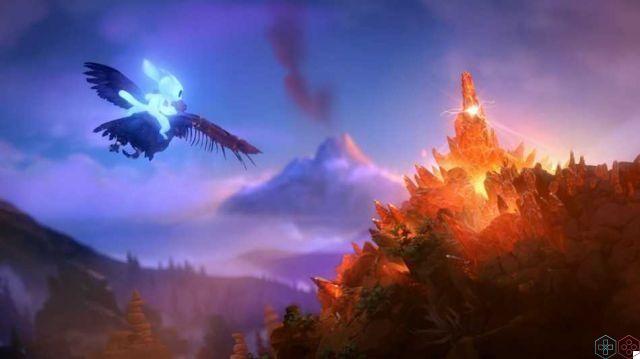 If from a narrative point of view Ori and the Will of the Wisps presents itself as an exciting reconfirmation, on the gameplay side, the novelties stand out above all. First of all, that of the system of enhancements of the character's abilities; in this second chapter we abandon the linear progression of skills to contact a system for the collection and selection of artifacts, distributed on the Niwen Forest map.


The search for these artifacts, called Fragments, pushes us to a deeper exploration of the game map, while a low number of available slots forces us to choose which fragments to use from time to time and thus vary our style of play according to the situations.

In addition, some special abilities such as triple jump become a real purchasable asset; to act as currency come the basic Lights and the spiritual Lights, which we find along the way or are dropped by the enemies we defeat. In addition, plot items such as the Mysterious Seeds and the Gorlek Ore allow us to interact with the characters we meet and have access to additional subplots and benefits. The rescue system also changes: no longer manual, it becomes managed by automatic check-points, distributed in such a number as possible never make respawn too frustrating. 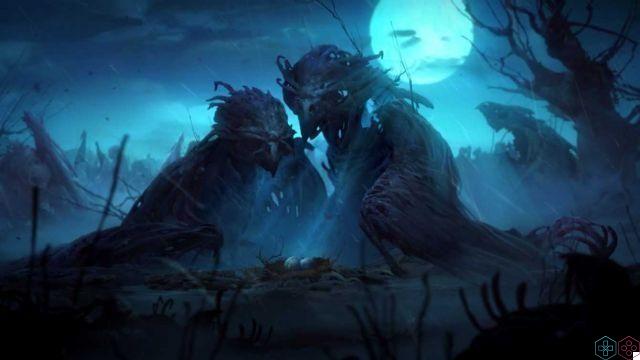 The most interesting difference, in our opinion, comes with the combat system. No longer a single mode of attack, but a new, completely revised system for acquiring weapons and selecting them. In fact, along the course of our adventure we have the possibility to acquire new attacks, and to equip them from the selector.

We will, however, unfortunately, only three slot and here too we will have to operate one painful choice according to the enemy we face. Spirit Slash for sweeping enemies at close range or Bow for those at range? And still Spiritual Lights that target our enemies and that remind a little of our friend Sein or our inevitable and very useful Slingshot ability, which allows us to use enemies and their ammunition as springboards?


Even the bosses and minibosses undergo appreciable changes. Both, in fact, are equipped with specific move sets that we will have to learn to be able to defeat them and we will often be forced to resort to our inventiveness and to elements of the scenario to emerge unscathed from the arenas and from the obligatory challenges. During the fights we will find very useful those skills that in turn we use during the platforming phases, thus balancing, to the maximum, all management of gameplay mechanics.

The only negative note, the difficulty of the challenges it does not always appear perfectly calibrated and it can happen to run into round challenges against the bosses in which the frustration level is likely to rise quite a bit. In these cases, our advice is to stay calm, become familiar with the specific moves of the boss and don't get beaten down by defeats. Although tough, all challenges can be overcome with a good dose of practice and creativity. 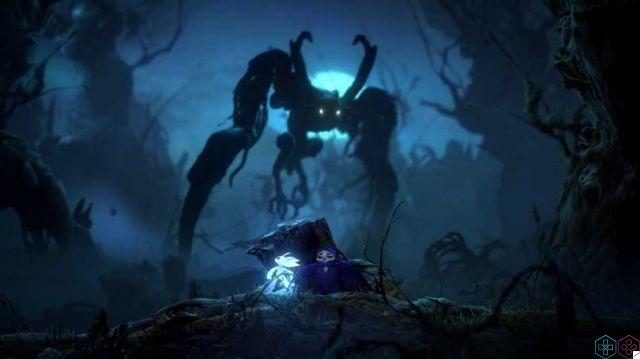 Ori and the Will of the Wisps storyline and gameplay had already captured us. But it is the technical sector that has done the rest of the magic. To say that the graphics of this second episode are spectacular, in fact, would be little. Starting from beautiful and touching settings up to the very fluid animations of little Ori, every detail appears created and chiseled to perfection by the Moon Studios team.

Played from PC, Ori and the Will of the Wisps gave us an experience that was not only touching, but also solid and satisfying; with only very rare drops in frame rate in situations of greatest effort for our technical apparatus. The even more vibrant colors and the excellent particles that enhance the 3D effect add to the picture of the merits, giving this second episode an even more fascinating aspect than the already masterful one of his predecessor.

Impossible not to get excited about the story of Ori and Ku, when it is told with such a visual impact; and it is even more difficult to remain impassive when the soundtrack invades our mind and fills us with enchantment. Taking up the famous theme of Ori and the Blind Forest, Gareth Coker gives intensity and sweetness to this second journey; and overwhelms us both in its tones darker than in those brighter, making it unforgettable. 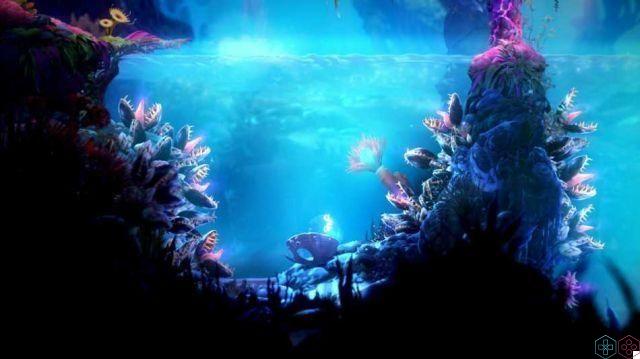 It is undeniable that this second chapter of Ori has involved and excited us as we did not think possible. The additions from the point of view of the gameplay have allowed Ori and the Will of the Wisps to stand out positively from its predecessor; while the technical sector and the expressive power of its history have given us everything we expected from a sequel of this magnitude. The rare drops in frame rate (perhaps attributable to our PC) and the excessive difficulty of some challenges are the only defects that we feel we can report in a title that is solid and flawless from every other point of view.

For those who had already loved Ori and the Blind Forest, this second chapter is a new, touching and unmissable journey into the hearts of Ori and his friends. For those who have not yet played it, it is a very valid starting point to immerse yourself in the Nibel forest and experience all its charm.

And you? Have you already tried the new Ori and the Will of the Wisps or will you after reading this review? If so, have you taken a look at our Goal List? It could be very useful for unlocking all achievements and reaching the coveted 100% completion.

Review Outward: when RPG and survival come together ❯

add a comment of Review Ori and the Will of the Wisps: un ritorno spettacolare