Summer is upon us and that annoying night buzz is about to return, but now we don't have to worry anymore! Playagame Edizioni sends toucans and chameleons to our rescue. Find out how in our Mosquito Show review

It was conceived by Bruno Cathala and Andrea Mainini, and illustrated by Camille Chaussy. We are talking about Mosquito Show, the protagonist of our review, the new game by Playagame Edizioni arrived on the shelves this May. It is the fourth game from this publisher to contain fantastic miniatures, in this case toucans and chameleons.

At the head of a nice couple of animals we have to go into the jungle. Using a bit of strategy, we must be able to eat at least 9 golden mosquitoes or eat all the mosquitoes that surround the opposing animals to block them and be able to achieve victory.

Be careful though, each mosquito has its own effect and your plan to defeat the opponent may turn against you.

In this phase, once the game board has been opened and positioned, we must shuffle our tokens and place them in piles of three until all nine of our ponds are covered. After this step, we must turn only the tokens that do not have the water lily on the back while those marked with the flower will be turned only when a toucan or a chameleon will eat them.


Now the game can begin!

How to play: the rules | Mosquito Show Review

Phase one is the placement phase. We choose the one who will be the first player, starting from him we will place our miniatures alternately (first one player and then the other) on the jungle areas, that is, the bushes that surround the ponds. It does not matter which animal we place first.

The second phase concerns the movement. During your turn you can only move one of your animals and to do so we must be able to eat a mosquito, no matter if it is uncovered or covered, the only important thing is that it is the one on top of the pile.

After eating the mosquito we have to activate its effect which changes according to its color.

It should be known, however, that toucans and chameleons have different movements. The toucan can move diagonally and fly over as many ponds as he wants, the key thing is that they all have at least one token on them and that they are all in the same direction. The mosquito effect will be activated in the order decided by the player and not necessarily in the order in which they were eaten. The chameleon, on the other hand, can eat only one mosquito on one of the ponds that surrounds it and can only move on a jungle area next to it.

In both cases the animals can move to jungle areas that are not already occupied by other animals.

The shift phases are summarized in three essential points:

How the game ends

The game can end in two ways:

This new game from Playagame Edizioni is very simple, but exciting even for those who are no longer children. It is impossible to stop after just one game, the duration is really short which makes you want to do more and more.


The miniatures are certainly the strong point of this and other Playagame titles, such as Jurassic Snack. They are made of very resistant plastic, brightly colored and detailed.

Easy to learn and to explain rules.

Personally I would have added an extra mosquito with an effect other than simply moving tokens or moving your own or opponent's animals. Just to give the game a little more spice. 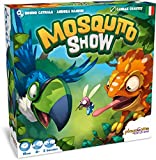