The guys of Milestone, Spanish developers whose bread and butter has been racing games for the past 20 years, seem to want to start 2019 in the same vein as last year. After releasing five fantastic titles based on various brands and motorsports in 2018, the team is back with another officially licensed racing simulation. Monster Energy Supercross - The Official Videogame 2 does not differ from the previous production of Milestone, offering enthusiasts a curated simulation of the world of supercross and above all ofAMA Supercross Championship.

Will the sequel be able to improve upon the original to become one of the best supercross titles ever released? Or will it be the classic case of "more of the same"? Let's find out!

Racing games can no longer do without a career mode and Milestone could not miss it in Monster Energy Supercross 2. As in the previous chapter, players will be able to create their own driver and make their way in the 250cc class up to the “greats” of the 450cc class.

Once launched, Career mode allows you to choose between two circuits, 250 east or 250 west, circuit 450 will initially be blocked. Each circuit has its own tracks and its drivers to compete with, all accompanied by official licenses of the AMA Supercross Championship 2018. The 450, instead of being a totally new circuit, is a combination of both of the previous circuits.


The career is divided into weeks, in which you have two or three days to plan the pilot's activities. The reason there are only two or three days available is because every other day is already booked for the pilot's rest. This means that a week with two days of rest leaves three days for activities, and vice versa. The last day of the week is obviously reserved for the race, while the next day is used to allow the team to move between the track locations. Exist four types of activities to choose from on "free" days: training, challenges, promotional events or press events.

The training days give the possibility to improve one or more characteristics of the rider, including landing, tilt and reaction speed. Each of these workouts has its own mini-games that require you to complete certain objectives. For example, landing training places you on a runway with the purpose of jumping and landing within colorful target circles. The better you do, the more stars you get, for up to three stars. If you want to reach the next training difficulty, you have to complete a certain number of timed challenges and one-on-one challenges.

Challenges allow you to face other AI pilots in a head-to-head battle to demonstrate your skills. The riders that can be challenged have a given rivalry percentage, this value changes the type of challenge that can be faced with them. Riders with 50% rivalry or less offer a one-on-one race, while riders with 50% or more rivalry offer time trials. The one on one is a real race: you and another driver go head to head. Time Trials put you on the track and give you a lap time to beat. Get three lap attempts to beat the indicated time; if you finish faster in any lap, you win. Winning one of these challenges rewards you with experience points and also reduces the competing driver's rivalry rate. 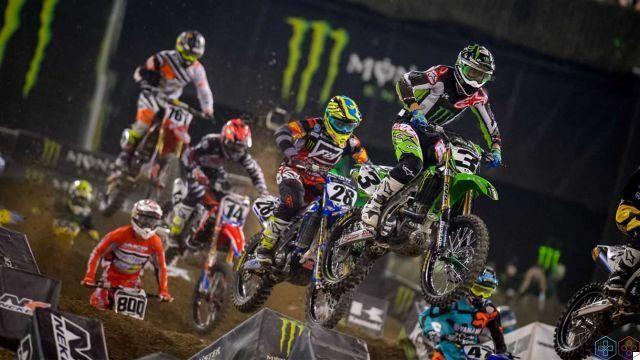 The days dedicated to promotional and media events require no particular action other than clicking on them. These are events that offer extra cash or extra fame points and are presented with short, repetitive videos in the long run. The promotional events earn money, while i media events make the pilot more famous. Both are useful because give the possibility to be able to unlock sponsors and updates for the bike more quickly.

Updates and improvements are quite expensive, but it will be worth buying them. Some things you can buy are purely cosmetic, while others improve the performance of the bike. For example, the first thing I bought was a better exhaust pipe, which increased my speed and acceleration; the difference was immediate. In addition to the add-ons for the motorcycle, you can purchase various helmets and suits; the choice between the various official brands is very varied and accurate.

Sponsors offer signing bonuses, daily payouts and prizes based on specified competition requirements. For example, a sponsor may offer $ 1.000 for signing up, $ 1.400 for a promotional day, and $ 1.800 for any race that finishes in 13th place or higher. However, not all sponsors are available from the start; you need to reach a certain level of fame before the best sponsors give it a chance. Better sponsors mean higher payouts, but that comes with the expectation of finishing races in the highest positions. Each sponsor provides a limited time contract, on average it tends to be between two and four weeks. After the conclusion of the contract, you must choose another sponsor, even if you can re-sign with the sponsor you just had.


The changes, compared to the career mode of the previous chapter, are not many and focus mainly on the addition of background content, such as the weekly out-of-race events and the new advancement and customization system. Counting on three new parameters (Fame, Rivalry and Experience) the growth of the pilot acquires a greater depth, but collides with an excessive simplification of activities and with a repetition that, unfortunately, curbs any possible enthusiasm in bringing the season to completion.

The true great addition to the solo experience of Monster Energy Supercross 2 does it the introduction of the Compound. It is un’area free roaming where you can ride carefree with your own bike, taking advantage of the presence of various individual events and time trials. It will be possible to unlock new sections of the Compund as the aforementioned challenges with rivals are completed. A nice addition that will give a little fun between races, as well as a good dose of fun.

Outside of the main career mode and the Compound, players can immerse themselves in individual events of the official championship, single races and timed races.

Il Online multiplayer is supported for up to 12 players. Aspects such as available aids, AI difficulty and physics are set by the host, while the tracks to race on are decided by a voting system, as are the weather conditions to race. There is nothing extraordinary about the online functionality, but everything went smoothly during testing and the time spent in the lobbies between races was short.

The icing on the cake comes with the Path Editor, which allows players to create their own supercross circuits within a variety of stadiums and share them with other supercross fans. The editing tools are quite limited, but still allow you to create complicated combinations of turns and jumps in minutes.

An experience for everyone - Monster Energy Supercross 2 | Review

Monster Energy Supercross 2 does what is expected of a well-crafted driving simulator, offers players a variety of options to tailor the experience to their skill level. For example, set the Physics option to Standard and it will turn Monster Energy Supercross 2 into a lighthearted, almost arcade supercross game. Passing the physics setting to advanced, however, every curve and jump will be an obstacle that will require careful management of the bike and the rider, with pinpoint precision. In case of error, in any case, there is always the rewind command.

Further options enhance or reduce the realism of MES2: the choice of AI difficulty, the choice between manual or automatic transmission, choosing whether you want to manually shift the pilot's weight and acceleration when jumping and landing. Monster Energy Supercross 2 is easy or hard depending on your choices, it's a product for everyone from supercross novices to hardcore fans. Furthermore, Monster Energy Supercross 2 starts with an easy to follow tutorial which offers beginners an in-depth guide to the mechanics and techniques of the game and sport in question. These tutorials are a very welcome addition - they give new players a valuable tool, with the ability to improve to become competitive.

In essence, Monster Energy Supercross 2 is gameplay that will reward the player's commitment to paying attention to every single detail of the circuit and constantly improving their skills. 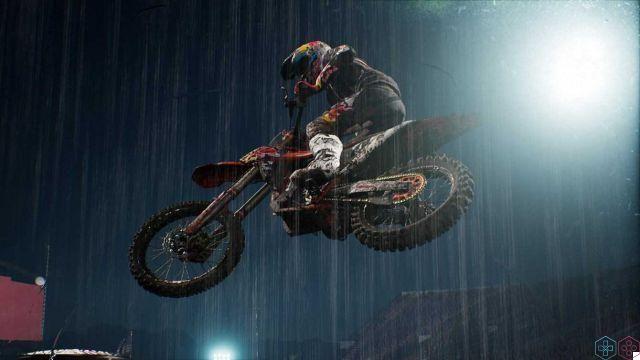 The work done with theU on the part of Milestone compared to the previous chapter is there and it shows, but not all aspects have been improved. When the gameplay is set to run at the maximum simulation possible, the gaming experience is very satisfying. This is due to the excellent work done on the physics engine with a more realistic management of the terrain and the importance given to the distribution of the weight of the bike / rider that is truly remarkable. However flaws in the collision system remain, still rather unrealistic in the discounts with the opposing riders and in the falls from the saddle.

The graphics sector does not differ much from the previous title. Note of merit to lighting system that does a great job in the management of lights and shadows on the runway. All in all the performance of the tracks, motorcycles, riders and the environment is enjoyable, especially when the ground is wet. Sore point, at least on the PS4 version, the stability of the frame rate and the general performance: when there are different elements on the screen (such as at the beginning of the race) it is not uncommon to see shuttering phenomena e some delay in loading textures (especially in Compound mode). There are also some bugs, including a very annoying one: sometimes the audio in the menu freezes and you need to restart the game for it to work properly again. For the rest the sound experience is also enjoyable, great attention in the reproduction of environmental noises and media as well as in the choice of the music playlist.

Certainly, as might be expected from Milestone, congratulations must be made for the obsessive attention to the details of the motorcycle models as well as for the excellent realization of the circuits.

Monster Energy Supercross - the Official Videogame 2: is it worth buying?

Monster Energy Supercross 2 definitely represents a qualitative leap compared to the previous chapter, but not the definitive one. The gameplay and technical implementation are well taken care of and allow the product to reveal itself a rewarding and fun experience both for those looking for an extreme simulation and for those new to the world of supercross. In addition to the physical engine, the rest of the technical sector is also discreet, even if not without some burrs. Remarkable the fidelity to reality as regards the models of the motorcycles and circuits, as well as the numerous objects for the personalization of the vehicle and the rider.

However, something more is expected from career mode, from race presentations, from technical commentary and from all those other elements that can make Monster Energy Supercross 2 a richer and more varied experience. The last hurdle to break down is the risk of to make the player fall into the abyss of repetitiveness. Milestone is tasked with making the last big leap on the track!