Review Hive: “God save the queen”… of bees

As the Sex Pistols sang "God save the queen", but in this case it is the queen bee. Get ready for the most infesting review ever, Hive's bugs are ready to go to war for domination of the entire hive

Award-winning board game, Hive is a strategy abstract created by John Yianni and was produced by Gen42 Games and distributed in Spain by Uplay.it Edizioni. Very similar to chess as game mechanics, it has, unlike them, a very original theme, namely that of the hive, precisely Hive.

This time we should not defend a king, also because there is no one, but the queen. The aim of the game is to keep our queen bee free and to surround the opponent's, only in this case can we declare victory.

There are three versions of Hive: the classic, Hive Pocket and Hive Carbon. Let's see how they differ:

All three versions are equipped with a bag to make the game easily transportable.

As already mentioned above, there are expansions of Hive, three to be precise: the ladybug, the mosquito and the oniscus. The first two are already present only within the Pocket version, while the onisco is sold separately for all three.

First of all, the thing that immediately catches the eye is the lack of a game board. To play Hive all you need is a smooth surface to lean on and nothing else.

As for the pieces we have 22 (11 white and 11 black) and they are all hexagonal in shape. Each player has the following basic pieces available:

With the addition of the expansions you will also have: 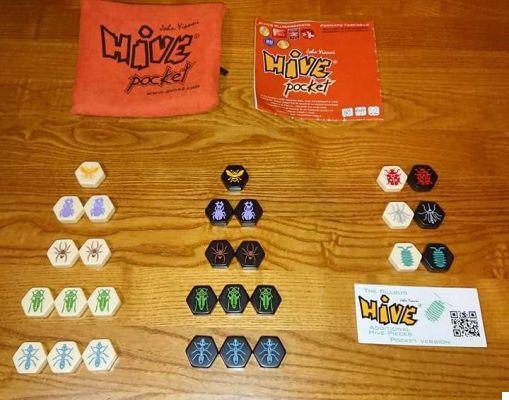 First of all we have to decide whether to use only the basic pieces or whether to add one, two or all three sets. After that we choose whether to play with the whites or the blacks and decide who will be the first player.

After all this we can start with the placement of the first pieces.

It is played in alternate turns. The pieces are placed next to each other.

Between the first and fourth round it is mandatory to place the queen bee, only after its placement is it possible to start moving your pawns.

During your turn you can bring into play a new pawn, which must be placed adjacent to the pawns of your color and not those of the opponent, or move a pawn already on the field.

The most important rule is that the hive cannot be divided.

The objective I say surround the opponent's queen bee and block it from all six sides, the pieces that surround it can be either your own or your opponent's. If we can do that we won the game.

I met this game after a chat with a friend and since that day it has been fixed in the top 10 of my favorite games.

Among the three versions I prefer the Pocket, which is the one I bought, because it is the most comfortable to carry around in order to play anywhere; it also already has two built-in expansions and costs less than the other two variants. The one I like least is the Carbon, because visually speaking the choice of black / white also for insects has raised a pinch of liveliness and also for board games the eye wants its part.

The classic version and the Carbon version also have the flaw of having only the basic pieces, of not being very comfortable to carry around and are the ones that cost the most.

I find Hive to be a great game to approach chess or to replace it if we like the idea of ​​playing something strategic, but less cumbersome.

Both the game and expansions are currently out of production. It is still possible to find it on some sites, but at much higher prices than those mentioned above.

Review Household: the smallest RPG in the world ❯

add a comment of Review Hive: “God save the queen”… of bees