Imagine a dungeon crawler in which the enemies you face are employed turned into zombies. Sounds crazy to you? Do you think that such a game already exists, it is called Going Under and this you read is our review about it

to Going Under it's a noteworthy experiment. The title offers a glimpse of the current one work condition of many countries (something that in itself has very little fun) and turns it into material from the dungeon crawler. Yes, in Going Under hordes of bloodthirsty employees and interns will lash out at you and you will have to appeal to all the caffeine in your circulation to repel them.

We got to try this unusual creature on Nintendo Switch and we are here to bring you our impressions. Don't delay any longer and get ready to go lower and lower with us in this Going Under review!

Once upon a time there was a little one independent software house in Seattle. Aggro Crab, (this is the name of the software house) was founded by Nick Kaman and Caelan Pollock, two young people with different programming experiences. The two had the idea of ​​turning their busy past into a game militanze in startup of all sorts.

Seattle, their hometown, from 2019 turned the minds of the two young people into a large wild dungeon and overwhelming. The two populated it with neurotic and caricatured characters, counterparts of many exasperated workers. Thus the project was born Going Under, an unusual title of exploration and survival nurtured by pungent satire.

Team17 also took part in the work as a publisher. Who remembers a certain videogame series entitled Worms knows that this software house has some experience with unusual titles but full of potential. Going Under ha debuttato su Nintendo Switch, PS4, Xbox One e Steam il September 24th. In this review we are going to dissect the mephistophelic creature of Aggro Crab starting from its narrative component.

In Going Under sarete Jacqueline Fiasco, an intern just hired in the ramshackle marketing department of fizzle, the company that produces the eponymous drink with an undefined taste. Fizzle, in turn, has just been acquired by cubicle, A kind of multimillion-dollar multinational which cannot fail to remind you of the Fantozziana Megaditta.

Jacqueline will soon realize that the work she will have to do in the company has little to do with marketing and communication and much more with lead hands. Yes, because the lower floors of the company (low in the literal sense), are populated by old startups incorporated by the Cubicle. The latter has now milked them until they are dried up like real cows.

- employees of small semi-failed startups, under the exploitative influence of the Cubicle they turned into zombies and demonic creatures. Jacqueline, totally incredulous and upset, is pushed by the head of the office, Marv, a clean up the dungeons of the company by the cumbersome presence of infernal workers. The girl, moved by the fear of losing the job she has just earned and in the blind hope of carrying out this task only for the first time, ventures into the company dungeons.

THEplot staged by Aggro Crab, albeit simple and linear is convincing. Between one dungeon and another, Jacqueline's story row in an interesting way and credible (in its absurdity). The girl has the opportunity to deepen the relationship with others colleghi of the company. These are all more or less memorable, well built and you will not be long in becoming fond of us. Aggro Crab also filled the various scenes of sarcastic exchanges, surreal, irreverent and often decidedly hilarious that will tear you away different smiles (of which someone bitter). Let's proceed now in our review of Going Under with the considerations inherent to the gameplay. 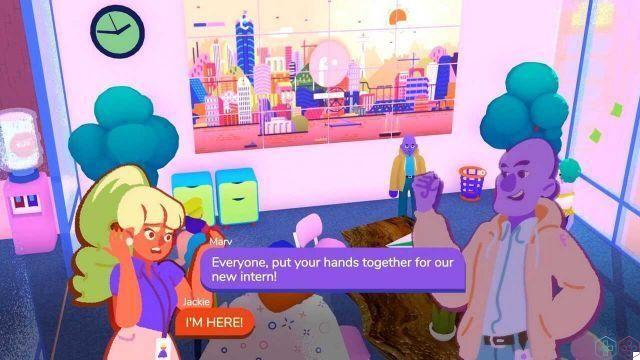 Once thesatirical wrapper where Going Under is sealed you get to heart of the experience. Although the appearance somehow masks it, Going Under is a roguelike.

As Jacqueline you will be able to explore the various basement of the company. Each of these is organized in 3 different levels whose environments are generated in such a way procedural. This essentially implies that the map of the various dungeons is created in real time from time to time. Ok, we understand that Going Under is a roguelike but it is original somehow? Yes definitely.

The main feature of the title is the freedom of approach to combat. The latter is very basic and intuitive (so much so that there are not even tutorials to introduce it), and focuses everything on weapons. And think that in the title there are not even preset weapons! Anything blunt enough that you come across will turn into a mean of offense. Each of these will have specific strengths and attack values. Ultimately everyone will be able to transform your gaming experience.

Le water guns they shoot jets at enemies and make your movements staid and lazy. With a ping pong racket in your hand, on the contrary, you will become supersonic human bullets and will tackle the villains like octopuses. In this certainly Aggro Crab has somehow managed to give freshness and variety to the combat system. It rests on too much foundation elementary and weapons manage to embellish it.


What weighs, however, are the settings which in the long run they will become a little repetitive and make thevery mechanical exploration and predictable despite the procedural criterion. Defect common to many other roguelikes. The review continues with the other gameplay elements of Going Under. 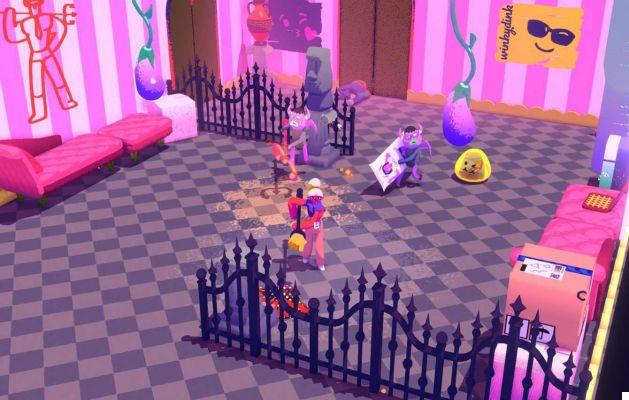 Some Like It Hard - Going Under Review: Interactive Satire

How else does Going Under reflect the nature of roguelikes? In difficulties, obvious. The title of Aggro Crab is a 'authentic challenge. From the second floor of the first dungeon, thunderous bludgeons will begin to rain down on you.

You will want to learn how to master the various mops, tablet pens and keyboards that you will find around as soon as possible. Otherwise the hearts of your health bar will become a memory. THE boss of the game are the mirror of the executives bastards and dehumanized. Whether for the quantities of caffeine ingested or for pure sadism, they are real stray mines. Defeating them, in addition to the purest fulfillment, will grant you gods permanent power ups definitely interesting. Basically, every racket you throw at it will be well spent.

As you play (and you will perish) you will get new ones bonus purchasable with specific points obtainable by facing the dungeons. Even when you fail to get to the fateful bosses, you can still take home a handful of points. By getting your hands on the various bonuses you will be able to gradually soften somehow the experience.

Also present various lootable skills in dungeons and can be improved through use. Some of these are really useful such as the ability to stun enemies after launching a critical hit. Also available some "Whatsapp", a kind of bonus (also these lootables in the dungeons), usable only by 1 or 3 times each.

The sore point is that, probably, due to an extreme stylistic choice, the descriptions of these bonuses are in a sort of weird way German invented. Aggro Crab, in this way, perhaps wanted to suggest the idea that Jacqueline's corporate smartphone has malfunctions. It goes without saying that you will use these apps in the early days almost at random trying to learn the meanings of their icons soon to use them more thoughtfully the next time.

If even with these power ups it will still be impossible for you to reach or defeat the bosses then, in the main menu, you will be able to modify various difficulty settings of game. This way you can instantly ease the game. Finally, the longevity is not at an all-time high and (with the difficulty to a minimum) it will take you about fifteen hours to complete it. Let's now see the last part of the review with the technical considerations on Going Under. 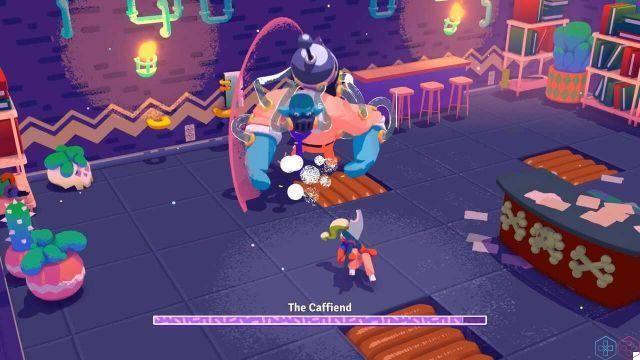 Just take a look at the game screens you see here and there in this review to understand how Going Under is successful from the postural aesthetic. Aggro Crab designers made the depressing e flat reality by Jacqueline a 'color explosion.

That staged is a rather ominous story in a dystopian universe yet everything seems to come out of an illustrated book for children. The cell shading gives life to super deformed cute and hilarious characters. The game world, stylized and caricatured, appears fresh, vibrant. The colors and lighting are used in a sophisticated way and make the whole thing very pleasant at the sight. The 2D illustrations of the characters are also excellent.

The contrast between the bitter essence of the story and the gaiety of the visual component is practically irresistibleAnd. The latter, together with the continuous sarcasm of the dialogues, manage to dilute the intrinsic bitterness of the story of Jacqueline.

The less memorable audio component which, despite its exasperating repetitiveness, still manages to contribute to the yield pleasantly sophisticated of the title.

Everything runs smoothly on Switch, no frame drops to be recorded, even in the most excited phases. The function HD rumble of the console also makes clashes fun and enjoyable since each weapon has a different feedback and you will certainly delight in trying them all. 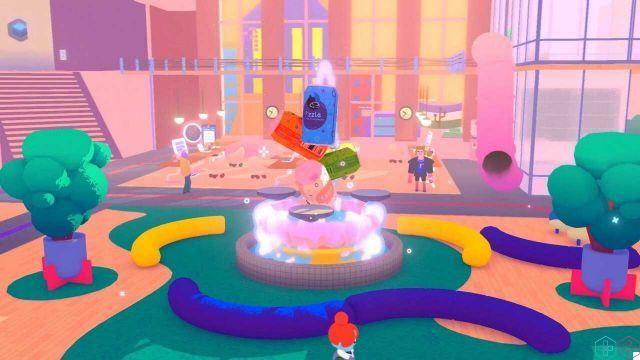 Going Under is a pleasant one surprise. The title of Aggro Crab is intelligent, original, irreverent, funny and pleasant. Between the folds of the solid roguelike structure there is something going on beyond the videogame. The Seattle-based software house has managed to transform an uncomfortable and very delicate reality into a concept of game and an object of satire. The game wears the videogame mask to offer one merciless and cruel overview of an equally ruthless and cruel reality: it labor exploitation.

I workers, enslaved from their employment, they lose their humanity and become zombie. Interns end up doing jobs that are totally different from their expectations, dirty jobs. Net of some flaws such as a short duration and the repetitiveness of the skimpy exploratory phase (procedurality is not enough to make exploration interesting) the game deserves. Going Under sprizza visual and conceptual charisma and we cannot help but recommend it, especially if you are looking for a fresh and different roguelike than usual.

Thank you for taking the time to read this Going Under review. Stay tuned with us at techigames for all the other news and curiosities from the world of gaming and beyond.

GOLAZO! Review: football has never been so strange ❯

add a comment of Review Going Under: satira interattiva