After playing and studying Ghost of Tsushima, the latest Sucker Punch title and the latest PS4 exclusive, we are ready to sum it up in this review

On November 15, 2013 one of the most important consoles in videogame history was put on the market. After the PS3, Sony really had a lot of weight on their shoulders and many, many expectations. PlayStation 4 has entered the homes and hearts of gamers tiptoed, he knew how to make people wait, also receiving fierce criticism at the time of its release. Despite this, however, despite a difficult and lame start, the PS4 generation, over time, has managed to offer us a series of excellent titles, including some truly unforgettable, thus tearing up the competition.

We do not know what awaits us with the next generation but, we know that the last seven years of gaming have been strongly characterized by the fourth creature from Sony. Today we are here to talk to you of the latest exclusive of this console that has made exclusives its strong point. Here it is, therefore, the Ghost of Tsushima review, the latest PS4 exclusive from Sucker Punch.

It is true that the wait increases the desire and, in the case of Ghost of Tsushima, this same wait has not been little or reduced at all. The first trailer shown by Sucker Punch that had left everyone speechless and had brought loads of Hype across the PlayStation community, arrived back in 2017. Three years have passed since that first trailer and the expectations for this title were very high and, also for this reason, it is very difficult to talk about it.

The true nature of the game was only shown a few months ago, during one State of Play, until that moment the speculations on the title were not lacking and even when Sucker Punch and Sony have decided to fully show the structure of the title, the community has split. There were those who harbored and still harbor perplexities, those who expected something else and those who, on the other hand, did not hesitate for a moment in pre-ordering the game.

Ghost of Tsushima is out and is available from 17 July 2020 and in this review you will find our overall opinion on what many have called "Assassin's Creed in Japan". 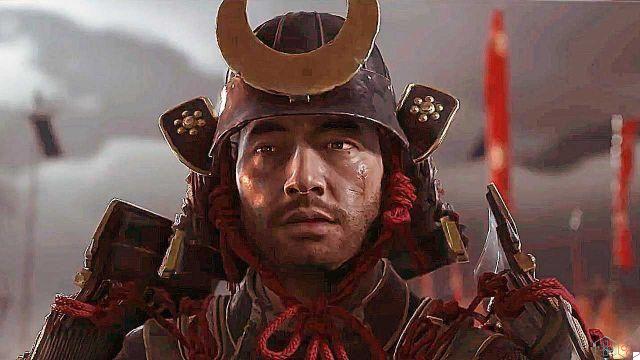 A Matter of Rhythms - Ghost of Tsushima Review

Before starting with the analysis and with this review of Ghost of Tsushima let's make it clear right away that you will not find any spoilers related to the plot. What we are going to tell you about the latter will be the result of a personal reflection and there will be no examination of particular facts or events. Let's start by saying that the plot of Ghost of Tsushima follows a very specific historical event and this will be clear to you from the very first seconds of the game. We are talking about the Mongol invasion of Tsushima Island which took place in 1274. We are going to put on the shoes of Jin sakai, a Samurai who will have the task of reconquering the island.

The plot of the title has interesting ideas, it lets itself be followed but (and this is noticeable from the first hours of the game) struggles to take off and the pace of the narrative remains rather bland. The quality of the narration is not excellent and this is easily verifiable also by the flatness it offers in the dialogues and in the various cut-scenes (both from the point of view of the direction and the screenplay) that do not shine particularly except in a few isolated cases. The characters with whom we will come into contact will accompany us for a while for the duration of the title and however much Sucker Punch tries to give them depth, there will be no too many evolutions really noteworthy.

Our protagonist, Jin Sakai, also has an interesting background but we don't think it will go down in history for his charisma. The pace, therefore, of the whole narrative sector remains quite bland but it is in the gameplay that this game gives its best, thus opposing a very varied playability on a rhythmic level. 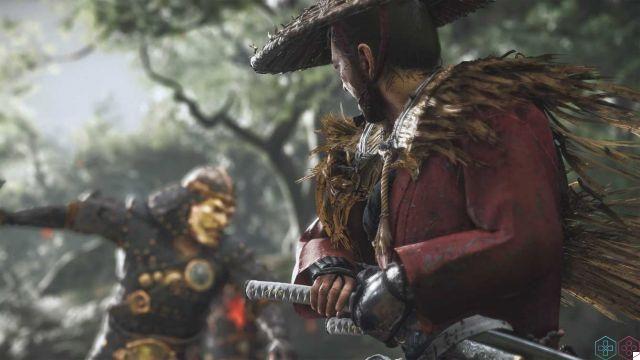 Ghost of Tsushima does not shine for originality on a structural level but, in our opinion, manages to dust off a bit of an already known and also well-tested structure that has characterized many open world titles of this generation. The latter concept is important to consider. The title is perfectly in line with its predecessors and also manages to offer some little more ideas, managing to place itself in a privileged position in the action genre. Many, once they saw the presentation gameplay, immediately compared Ghost of Tsushima to the last two titles in the Assassin's Creed saga.

The comparison is not wrong when we stay on an analysis superficial. Unlike the latest titles in the Ubisoft saga, Ghost of Tsushima still manages to offer gameplay very varied and satisfying with elements stealth, as in Assassin's Creed Odyssey or Origins, but without component support GDR (note of merit in our opinion) and with the deepening of a combat system which represents the real highlight of the game.

The missions, whether they are secondary or main, do not shine for variety but guarantee consistency to the gameplay. A gameplay that it will rarely bore you or it will seldom decrease in intensity, in turn guaranteeing you very long gaming sessions that you will not feel the weight of. 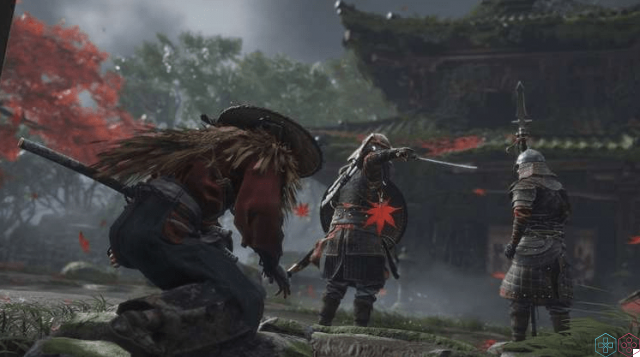 The Art of Katana - Ghost of Tsushima Review

We continue our review of Ghost of Tsushima talking about what is the real spearhead of the Sucker Punch title: the combat system. Fighting in this title is fulfilling and absolutely satisfying. One of the best fighting systems of this generation. We will have the opportunity to adopt several specifications (or skill) that we will develop during the adventure using what will be a simple progression and for this reason also very rapid.

We will also find ourselves having to deal with those that are within the game Form which, remaining in videogame jargon, are nothing more than four different types of stance. Each for each type of enemy: we will have a stance dedicated to clashes with swordsmen (Form of the Stone), one to face the enemies armed with spears or long weapons (Form of the Wind), one to face enemies equipped with shield (Water shape) and finally the stance to use against the tank (Shape of the Moon).

The switch between the different stances must take place within the same fight because we will face all different groups of enemies. This mechanic offers great depth to the combat system which becomes very technical when we go to duels. If the combat system is the spearhead of the title, duels represent the pinnacle of that same point (if it were possible to identify it), able to offer absolutely adrenaline-fueled clashes.

Precision, technique, cynicism and timing will be the qualities to have to win a duel. A sore point that we feel like underlining in a combat system that remains of great depth is the lack of the possibility of locking our enemies, which will happen automatically during the duels. 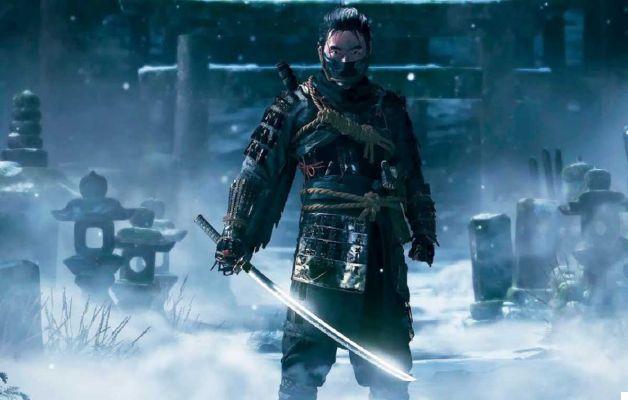 The Samurai in Ninja - Review Ghost of Tsushima

From Samurai to Ninja, in Ghost of Tsushima, the step is really very short. One component that will prove to be fundamental within the structure of the game is precisely it stealth. Your ability to be stealthy and silent, as well as lethal, however, it will not be immediately required but rather, it will be developed over time also following the needs of the plot. Plot that, however, will immediately pose an interesting dilemma: keep your samurai honor or give in to the temptation to act in the shadows?

This theme represents a welcome choice for us and an interesting case in which the storytelling and gameplay walk on same track. The artificial intelligence of the enemies is all things considered quite poor but this, in our opinion, is not a big problem. In fact, it produces what we will call the “Bulletstorm Effect”. In Bulletstorm our enemies were anything but bright or witty but this gave the player the opportunity to enjoy the combat phases a lot, putting in place spectacular actions with all the skills available. In Ghost of Tsushima what is a lack turns out to be a source of opportunity.

The stealth of this title is not linked to the planning of the attack but to the action itself and the possibility of using various gadgets and offensive maneuvers. We will not have the opportunity to mark our enemies, as happens in many titles of this mold and we will have to act following ours instinct, often moving within encampments, fortresses or various very large outposts. 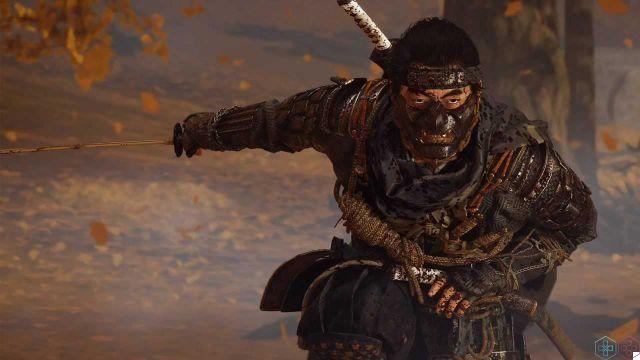 Ghost of Tsushima it's a title that has style and this style is absolutely not afraid to show it by focusing a lot on an artistic and aesthetic side eccellente. The play of light, the colors, the care of the biomes (all very different and each with great character) and of the environments makes, that of Ghost of Tsushima, one of the most beautiful worlds to visit of this generation. The exploration will make use of this general beauty so much that you will regret some quick travel that you decide to take.

But speaking of the graphic aspect and by this we mean pure, technical graphics, we are not facing the best product for PS4 and probably, it does not even fall into an elusive podium. The photorealism that attempts to offer the title is there but it's not perfect. PlayStation 4 has accustomed us to graphics and really powerful exclusives: like Death Stranding (graphically highest point in our opinion on PS4), The Last of Us Part 2 or God of War. To date we do not know if the title will also be published for PS5, in which case it could receive a noticeable graphical increase.

Sucker Punch still managed to pack a game technically solid (very few frame drops and bugs recorded on basic PS4) and with an artistic component enviable. Note of absolute merit: the music and the soundtrack, in perfect Japanese style, able to immerse us even more inside the work e able to offer that emotionality which the title could potentially be imbued with. 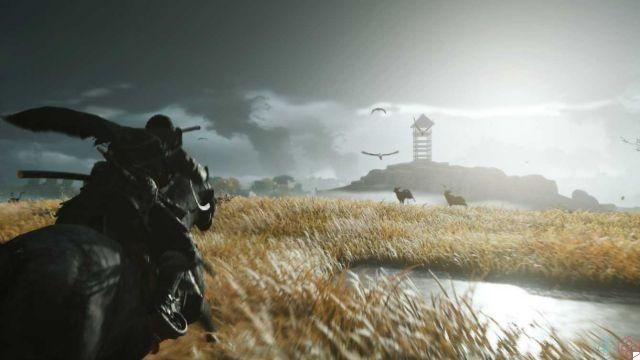 A right exit from the scene

Our Ghost of Tsushima review has come to an end, just as the life of the PS4 exclusives has come to an end. From now on, the fourth Sony home console will have to sharing the cake with her younger sister which will be out by the end of this 2020, to go, then, slowly to close its life cycle as well. Ghost of Tsushima represents one worthy and more than just exit from the scene, absolutely in line with what was the generation of video games that gave birth to it.

Are we facing a masterpiece? No, we are facing a excellent title, able to have fun with its combat system, able to offer great longevity and interesting ideas but which however has some flaws too many.

Please let us know if you have purchased this title, if you are playing it and what you think. Stay tuned to techigames for more news from the gaming world and beyond.

add a comment of Review Ghost of Tsushima: l'ultimo Samurai!