The world of indies is expanding every day, with more or less noteworthy titles. How did this Forgiveness behave? Let's find out together in our review

The largest market and therefore always full of new titles is that of indie, with some titles even created by individuals or by a small group of friends who share a passion for video games. Noam Matan Rotem he does not depart from these and has created Forgiveness, his very first title. Will it be an indie to be taken into consideration and which must absolutely be present in our library or will we be able to easily do without it? Let's start with our review and find out together.

Forgiveness: an escape based on the past | Review

This particular escape room, developed and distributed by Noam Matan Rotem, also presents itself as a "journey" introspective. In fact, before starting with the story mode we will be presented with a short quiz which will bring out our personality and our "capital sin" in which we reflect. After all this the game will start.

When we wake up we will hear a voiceover that will explain to us why we are in that situation and we can start our search for clues, not exactly difficult, rather. Once we have passed the “Prologue” level we will have to face a single challenge based on the result of the previous quiz. We will meet again in one of the 7 levels which represent the various deadly sins and once this is concluded, our "story" will be over.

From the point of view of the gameplay the lack of inventory which may contain some object, not to mention that we will not be able to have more than one object in hand at a time. This creates a great inconvenience, especially when we have to carry more objects from one point to another in the rooms. Another negative note comes from the various puzzles that we will have to solve; these in fact they will be really simple, allowing us to finish the game in less than 10 minutes on our first launch.

Forgiveness: let's take a look at the technical sector | Review

The technical sector does not excel, but it turns out to be slightly better (from some points of view) than what is the gameplay. Although it does not have excellent textures, graphically the game manages to reproduce gloomy environments very well organized. The sensation that can be perceived is in fact of abandonment and desolation in almost all the rooms, as if we were in some place forgotten by everything and everyone. 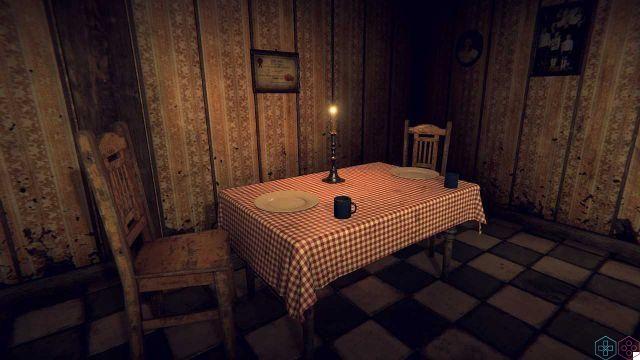 Although the settings are quite nice, thetotal absence of a body of our character is a rather sore point. When we take the objects, in fact, they will not be in one hand, but they will float in front of our camera, losing that little bit of realism that could be perceived with the surrounding environment. The audio sector is no better. The voice of the doctor who "imprisoned" us will be very muffled, as if we were in a bubble and the music in the background turns out to be too repetitive.

Forgiveness therefore turns out to be a rather poor indie, both from the point of view of the duration of the game due to the not at all complicated puzzles and of the "story" made up of only two levels (the first of which is always the same), both from a technical point of view. Lack of inventory is a very serious problem as it forces us to carry every single object at a time, not to mention the lack of corporeality of our character and a truly poor audio sector. The only positive note derives from the graphics of the rooms.


That's all for this review now. Recall that the game is available for PC (via Steam) at the price of 8,99 €. To not miss future news on the world of video games, continue to follow the pages of techigames!

add a comment of Review Forgiveness: an introspective escape room