Eventide 2: Sorcerer's Mirror arrives on PS4 with its mix of puzzle and hidden object search; let's find out if there is some quality in Slavic mythology

to Artifex Mundi, Polish publisher, is a pretty long resume. Even just looking at his site we can see that in recent years he has released at least one game a month. This publisher basically gathers various developers who focus on the so-called Hidden object games (HO games), that is, hidden object games. The House of Fables is one such developer.

Founded in 2014, SH is the birthplace of Eventide: Slavic Fable in November 2015. Eventide 2: Sorcerer’s Mirror it is clearly the sequel. Both born in a mobile version, they also arrive this year on PS4 (in April the first, September 26 the second) after a stop on PC and Mac. 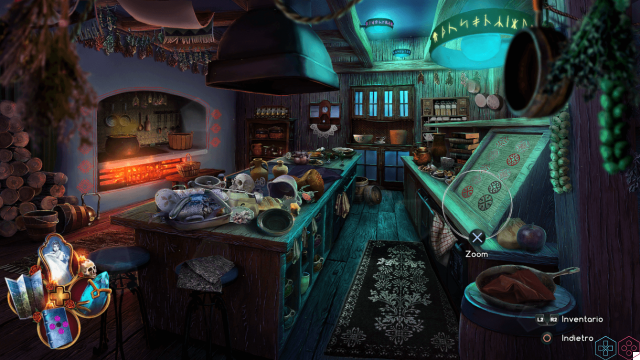 This second chapter again sees the center of attention botany Mary, in search of the granddaughter kidnapped by the immortal wizard Tvardovsky. The woman will have to explore a remote village in the mountains and be able to reach the villa of the enchanter. Between us and our target we will find goblins and puzzles ready to stop us.

Let's start by saying that it is not absolutely necessary to have played the first title to be able to face Eventide 2. Location and history are completely separate. I myself do not know the first game directly.

Furthermore, the protagonist is almost non-existent. For the setting of the HO games, the character we control will never appear on stage and will just say a few sentences at specific points. Honestly, I doubt that the name of the botany (Mary, in fact) was actually said in the game. I only know about it through the usual pre-writing research of the review. This alone can give you an idea of ​​how “personal” the narrative is.


In general the story told has its own why, without reaching any peak of quality. Let's say it's the right background. However, I believe that the Slavic setting has been little exploited. There will be hints of divinity and goblins are present, but in general it looks much more like a generic corner of the world that has fossilized in a medieval-like Nordic culture. Stylistically, therefore, the impact is not particularly interesting, however negative.

But let's get to the actual game. As we said we are talking about a HO games, that is a title that offers screens full of various objects including find those listed at the bottom of the screen. To this they add up small puzzles, quite simple, and a rosewater graphic adventure structure. That is, we will have to retrieve objects, combine them with each other from the inventory and understand where to use them. The interaction with the environment takes place through a pointer on the screen that we will move with the levers. The game also offers aids, which will be useful only if we are very impatient to find that last hidden object within a HO scene: depending on the level of difficulty, the aids will recharge more or less quickly, but also to "Expert" it will take very little. 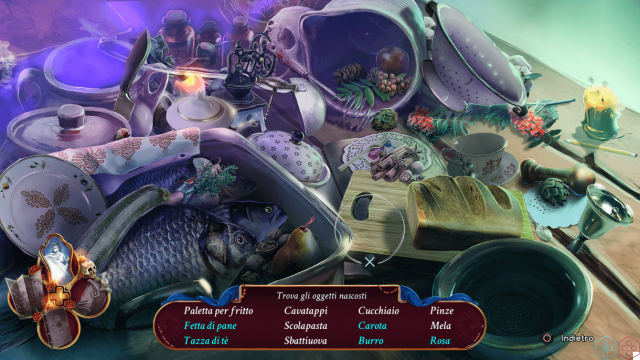 Each area of ​​the game consists of a handful of screens: we will basically have to go back and forth to find and use each object. In general, it is a very simple and quick game: in the first game you will not need to three hours to get to the credits. If you have to play it again, you can go through it again in less than an hour. Replayability is guaranteed only by some collectibles placed in the settings and by the possibility of making some choices that should change the story. I say "should" because the choices have no immediate impact: some things will happen differently in the finale, but the game will end with the exact same cutscene for any combination.


On average, the game is well made, we will always know what we are aiming for and, having found a new object, we will arrive at the solution with a minimum of glance and intuition. I repeat, it is a very casual game, also due to its mobile nature of origin.

The mobile nature is also noticeable in the graphic setting. The game consists mainly of two-dimensional scenes: these also make a good impression on PS4 thanks to the high quality of the drawings, full of details and colors. However, when the game tries some 3D polygonal animation it will be understood that everything was born on a much less powerful hardware. However, it is not a real problem.

Speaking instead of the sound, we must expect an English dubbing without particular character and a series of music and environmental effects appropriate to the type of game. A classic "neither good nor bad".

Eventide 2: Sorcerer's Mirror, who should buy it?

Eventide 2: Sorcerer’s Mirror è a casual game with a clear setting which leaves no room for doubt: it is suitable for lovers of simple and short puzzle games / HO games, who don't care too much about having a deep narrative or cutting-edge technical facility. At the time of writing this review it is not possible for me to know the cost of the game in the PS4 version, but the first title is sold for € 9.99 (the same price of both chapters on PC): I find myself assuming it will be the same for Eventide 2. So the point is why on earth would one get this version when at half price it is possible to get the mobile one? The only answers are lack of a phone or tablet, or the very simple trophies that in just one afternoon will give us 6 gold and one platinum with a minimum of effort. The game presents the texts in Spanish.

Thanks to Artifex Mundi for giving us a copy for the review.

6.9 Cute but limited in nature

Ever Oasis review, a small pearl between two genres ❯

add a comment of Review Eventide 2: Sorcerer's Mirror, among the Slavic mountains