In the past few days we have had the opportunity to get our hands on Dragon Ball Z: Kakarot, the new CyberConnect2 title on the adventures of Goku and company. Find out more in our review

The long-awaited title on the more than famous saga of Akira Toriyama has finally landed on PC (version we tested), PS4 and Xbox One. Departing from the purely fighting game to which previous DBZ games had accustomed us, Bandai Namco proposes a fresh, enjoyable and fun title, although it re-proposes the already well-established and sometimes retracted mechanicals of the pure action GDR.

It will be this new Dragon Ball at the height of the series Budokai Tenkaichi and his other famous predecessors? Let's find out together! Buckle up and get ready to go in search of the Dragon Balls in our review.

Dragon Ball Z: Kakarot aims to bring a title completely to the consoles of fans (and not) different from all those of the brand seen previously. After the two Xenoverse and the purely technical FighterZ, Bandai Namco decides to completely change the format, directing the adventure on decidedly different tracks from those of its predecessors. Unlike the last chapters, in which alternative storylines are proposed, a completely different plot from that of the manga and the animated series and custom characters, in Kakarot we find ourselves retracing the steps step by step adventures of Son Goku.

Although the choice is decidedly less original, reflects in full the will of the fans (including myself) who have been waiting for a long time to retrace the history of DBZ step by step on the current gen. In fact, the game (needless to say) is a riot of goodies, fan service and references scattered in a game world that is not too vast but definitely enjoyable. The missions of the main storyline go hand in hand with the side-quests, in which we find practically all characters of the series. The story traces the events from the six Saiyan saga to that of Majin Buu, projecting us into an open world to be explored. 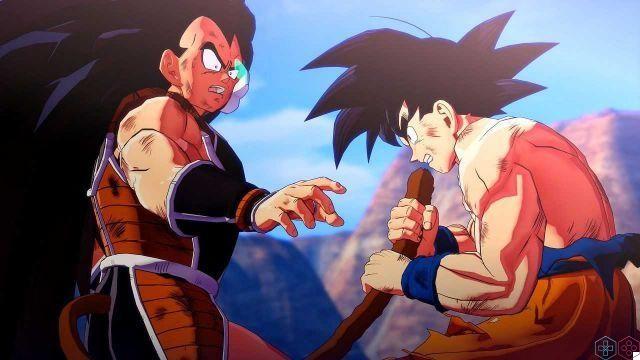 Let's start by talking about the game world of Dragon Ball Z: Kakarot. The first by now we had the opportunity to freely explore the universe created by Akira Toriyama, also because the author has always placed the world more as a side dish to the adventure of our heroes than anything else. The game offers an open world factor that is not too vast and in-depth, but definitely enjoyable. Dalla World Map it is possible to select which region to move to, and then to be able to move freely within it. It will be possible to explore iconic locations such as West City, Kame House, Karin Tower, God's shrine and so on.

This, in itself, is the first great gift to DBZ fans, who will be moved to relive the most famous moments and places in history in their entirety. The most important are also marked with postcards who remember them with a scene from the anime. These postcards are just one of numerous collectibles scattered around the game world. In fact between Z spheres, D medals, materials, food and the very famous Dragon Balls scattered around the world, the list of collectibles is long and makes them rewarding to collect thanks to the rewards they reserve.

While there are so many things to do and see, and the most famous locations have been very faithfully reconstructed, not all that glitters is gold. The world, however colorful and detailed, always gives the idea of ​​being there and not being there at the same time. At times, it gives the impression of being a gigantic area that mostly serves a prolong the experience through collectibles. The technical gap then, between the meticulous detail of the characters and some areas of the map, is so marked as to be disfigure some settings ruinously. 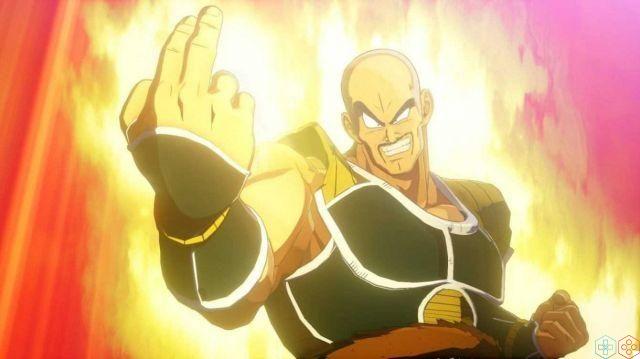 As already mentioned, Kakarot retraces the adventures of Son Goku and his friends, from the saga of the Saiyans to the annihilation of Majin Buu. The most important moments of the saga have been faithfully reconstructed both in graphics and in content, giving emotions upon emotions. By leveraging the nostalgic factor of those who were waiting for such a title with anxiety and desire, access to the missions is simple and functional.

The transition from the open world to the missions works, gives continuity to the adventure and leaves freedom of maneuver to the players who can choose whether to freely explore the game area or engage in activities secondary. For example, while waiting for Goku's arrival on the planet Namek, it is possible to explore the planet by encountering Freeza soldiers and spaceships. Furthermore, the possibility of look for the aura allows you to identify the objectives without wasting too much time, a fundamental element in an open world RPG.

In the side stories, Toriyama's touch is fully felt. Most of them revolve around old acquaintances of Dragon Ball fans, like Pilaf and his people or Yajirobai. These optional missions are temporary and disappear if you continue too much with the main campaign, enriching the narrative with the events of the characters contextual to that time frame. The purpose of the secondary missions is on the one hand that of enrich the gaming experience, on the other hand that of give goodies and curiosities to fans of the series, and the choice works. For example, we will find out why the mayor of West City is a dog or what Bulma's last name is.

Through the sidequests it is also possible to unlock Soul emblems, medals that can be used to create bonds between characters and unlock upgrades. For example, in the page dedicated to the fight, we could connect Goku to Gohan and Vegeta, unlocking power-ups in battle. Similarly, on the kitchen page, by linking to Chichi Gohan or Bulma, you can get bonuses on consumables, and so on. 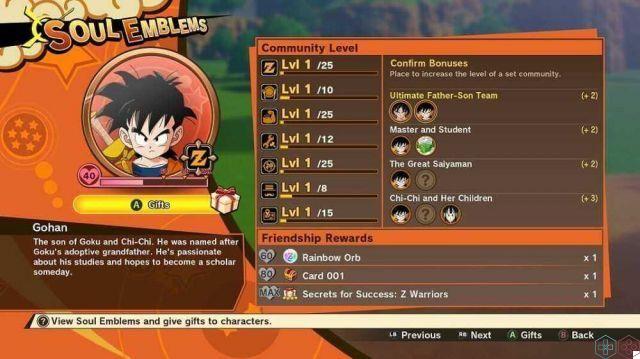 On the technical sector there is a lot to say, but we will try to be as concise as possible. The cel shading (o toon shading) used to characterize the graphics of the game, works great. In the middle of the line that CyberConnect2 had adopted and improved in the Naruto: Ultimate Ninja Storm titles, the choice is revealed a great joy for the eyes. Both during the exploration sessions and during the fighting the models are defined, cared for and detailed in all respects. Furthermore, the choice to change the clothes of the characters based on the context of the story, is a point in favor both from a technical and a goliardic point of view. Waving around the world with Vegeta in a pink shirt and yellow pants is really a pleasure.

The same goes for animations. The details are a lot as careful as they are faithful to the anime, transformations thrill as well as special abilities. Throwing a Kamehameha or transforming into a Super Saiyan during a fight is engaging and rewarding. The dodging of the characters has been perfectly recreated, as have the afterimages due to high speed. Kakarot is, in short, really nice to see, despite some small slowdowns during the automatic rescues or at the beginning of some battles.

Furthermore, thanks to theU, the most iconic scenes of the series have been reproduced truly faithfully. The cutscenes are beautiful to see, however, relying heavily on the fan's nostalgia factor. Separate speech for the dialogue interludes, which are not at the height of the cutscenes. These are a little less curated and don't do justice to a much better visual impact the vast majority of the time. Fortunately, it is possible to speed up the dialogues of the aforementioned interludes, in the long run slightly boring.

Last, but not least, the historical music characterizing the animated series. In fact, for the entire duration of the game we will be able to listen to the music we have memorized by watching the episodes sitting at the table during lunch, in front of the TV. In no time we could catch ourselves humming them as we punch poor Guldo and the tear may not hesitate to peek on the cheeks of fans. 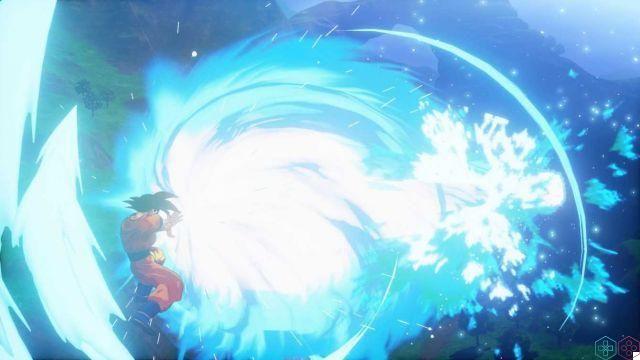 From what has been written so far, it should be clear that Dragon Ball Z: Kakarot it is not a fighting game. Contrary to previous DB titles, the choice to set the game more like a 'action GDR what else, is underlined by the lack of a multiplayer component. This can be a bit puzzling, but it's justified by a combat system too easy and not very thorough to be enjoyed outside the open world context. Simply, the title seeks and achieves a delicate balance between the two natures that make it particularly accessible to fans who, quite simply, want to relive the story of Dragon Ball Z in a video game.

In this light, the combat system is functional, although it may be simple and lean. Of the different Dragon Ball Zs we can move around in three-dimensional space, Kakarot is the one responds better. The control system is intuitive and with simple key combinations it is possible to access skills and transformations. Each special maneuver or technique consumes the aura, which we can reload at any time. If the smaller enemies can be simple and boring to deal with, the bosses are definitely more challenging.

In this regard, a minimum of preparation as a real RPG. Better get a good meal cooked by Chichi to increase our stats temporarily, and never forget to spend the Z Spheres accumulated to empower. The tree character development system is well built, allowing you to unlock and upgrade skills with workouts and the aforementioned Z-spheres. 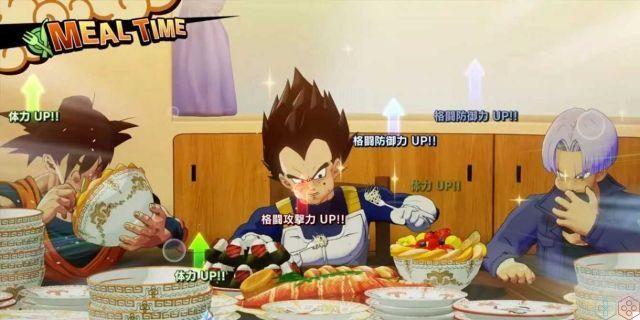 All supporting characters in the game are contextualized to the mission we are carrying out, and they will keep us company during the clashes. Also, they will help us differently depending on the category where they belong. We can order them to carry out certain attacks, use them to protect us or launch devastating coordinated attacks called Combo Z. This mechanic is one of the most interesting, deadly and graphically impacting within the fights.

Just like the playable characters, the support characters are customizable both in the abilities they will use to support us, and in the statistics. The only negative note is the roster of characters who, alas, disappoints. Unfortunately, during the adventure we will find ourselves controlling only Goku, Gohan, Vegeta e few others chosen. Minor Z Warriors such as Tenshinhan, Yamcha, or Krillin will remain simple support characters throughout the game. Great pity, also considering the importance that some of these have within the story. 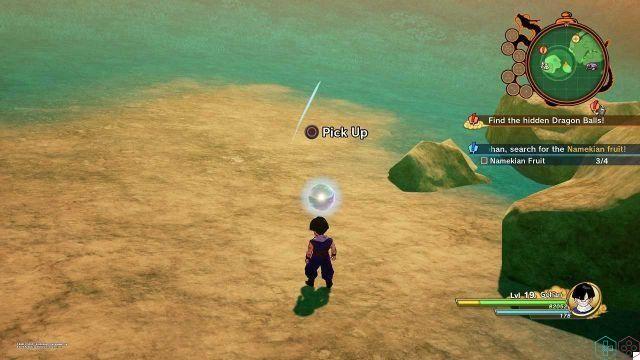 In conclusion, Dragon Ball Z: Kakarot is a good title for fans of the saga. The story is faithfully traced, the visual impact is really worthy of note and the fights are funny. The original music of the animated series contributes to the immersion and enrich the overall gaming experience. The pace of the game is quite sustained, even if the exploratory sessions are never deep enough due to the lack of interactivity with the game world. This could alienate or otherwise bore a player who approaches first to the universe of Toriyama, confirming the title definitely focused on fanservice, and that winks at those who know the story by heart.

To these players, it's actually hard to recommend Dragon Ball Z: Kakarot, but to anyone who loves Goku and the Z Warriors madly we can quietly suggest the purchase. Trust me, you will not be disappointed. The game is available from 1January 7 for PC, PS4 and Xbox One.

As usual, we invite you to stay tuned to techigames for more reviews, news, updates, and much more on the world of video games and more. Hi, and have fun!