Review Deadly Premonition 2: A Blessing in Disguise, do we have a new cult?

Let's go back to solving the most mysterious cases together with Francis York Morgan, let's find out in this review of Deadly Premonition 2: A Blessing in Disguise

The legacy to be sustained with this sequel is quite heavy, in fact it lies in the attempt to replicate one of the most complex narrative and medium formulas: being so ugly as to become beautiful. A balance that can be achieved with extraordinary authorial direction or purely by chance. Hidetaka Suehiro, aka Swery65, was able to exploit it in a totally conscious way, drawing communicative strength from budget limits due to a very troubled gestation.

Swery heavily took inspiration from Twin Peaks Secrets, so much so that our agent Francis York Morgan is a more irreverent copy of Detective Cooper. But he didn't stop there, taking as much as possible from the world of cinema and TV series.

The first Deadly was therefore a magnificent Frankenstein: horrible to see but with a beating heart and full of passion. It also is Deadly Premonition 2: A Blessing in Disguise as we will see in this one review, but surely there have been greater difficulties or haste in the development of this sequel, so much so as to generate an abomination that is too messy and chaotic, which sometimes made us overcome the limit of tolerance. Let's find out together.

This second chapter works as both a sequel and a prequel. In fact, we begin the game fourteen years after the events of Greenvale with Morgan severely ill and who has embarked on a lonely life and tormented by its nightmares. Since his retirement he has always been under the eye of the FBI and now they want to know more details on the events that involved him in the case of the murders in La Carré in Louisiana, even before those in Greenvale. We will be able to play those events and at the end of each episode we will return to Boston picking up the thread of the future narrative, a bit like it happens in Assassin's Creed.

The real game starts when the special agent in the past decides to go to New Orleans to visit some locations of the movie The Kiss of the Panther. However, on the way, he is robbed of his service car finding himself alone with a skateboard available. For this reason he decides to reach the nearest town, The Square. What was supposed to be a vacation soon turns into a new case to be solved. A young girl belonging to the most influential family of the place, was in fact killed in mysterious circumstances. 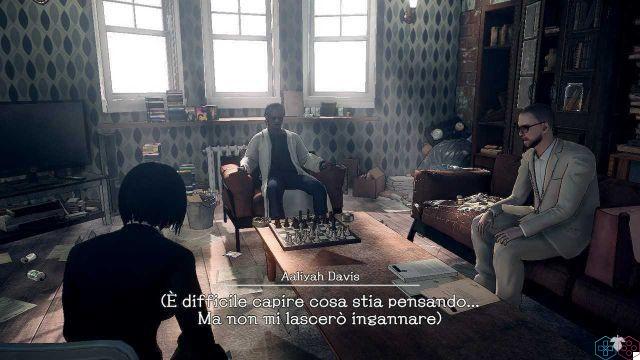 A new case to solve in between quotes - Review Deadly Premonition 2: A Blessing in Disguise

York takes possession of the case and begins to investigate, thus making the acquaintance of the various inhabitants. On the one hand we will face investigations dominated by logic, while others will bring a large portion of magia voodoo ed elementi soft survival horror. Nevertheless, the situations seemed frightening to us less impactful than in the past, this is a shame as they are quite important to the narrative. Guilty is perhaps a disappointing gameplay that failed to mediate, through actions, its themes.

The main plot events have in fact pleasantly kept us glued to the screen, constantly curious about the fate of some characters and the unfolding of the plot itself. Omnipresent are the endless dialogues between York and Zach (his second personality) that will make us discover a thousand background and curiosities about the world of cinema, from cult works to other more unknown ones. Furthermore, the most insignificant details could trigger small monologues and interesting complaints, similar to the seemingly frivolous dialogues seen in Tarantino's films. 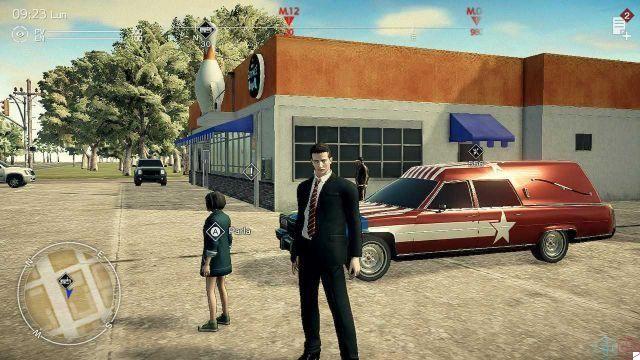 In fact, we discovered how much our agent loves showers with high water pressure, his new passion for bridges or the fact that the realism of a film is defined according to the rules he has set himself. The latter thought is almost certainly a self-quotation. Sometimes prisoners of these speeches are also the inhabitants of La Carrè, which unfortunately struck us less than in the previous chapter. However some have been able to charm us, like Patricia Woods, the young colleague from York, able to stand up to any absurd dialogue with the agent.

Nonetheless in its ups and downs, the beauty we have talked about so far is partially demolished by a subdued gameplay and a technical level of the game so low that it would make any production pale. 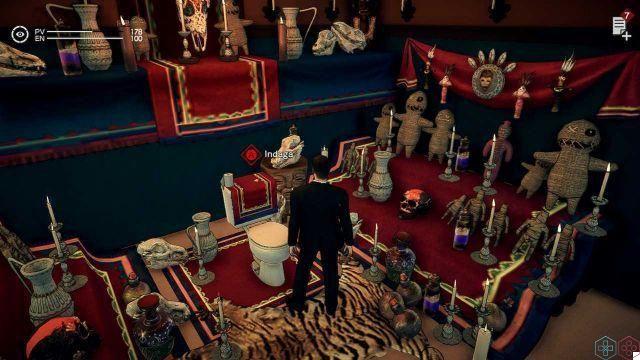 A deserted yet interesting town - Review Deadly Premonition 2: A Blessing in Disguise

Deadly Premonition 2 is an open world video game that takes place in the town of La Carré, a place that on paper should be interesting to visit, but sinks under the weight of a dull and poor design. Despite the presence of a few random inhabitants, dashing through the streets is an action that marks the desolation of the city. There is just a fundamental absence of details and elements that could make it more interesting. Different speech are the interiors, full of personality and attention to detail, meticulously recreated taking inspiration from life.

Between inside and out, our search for the culprit proceeds by talking to the various characters, running from one side of the map to the other and looking for clues by interacting with obvious exclamation points. It will also happen that you have to complete porter missions, picking up items from the ground and bringing red beans, squirrel tails and more here and there.

If this type of missions are already generally among the most boring in gaming, there is also the need to meet the characters within certain days of the week and times of the day. Fortunately, special objects are available that can make time flow according to our needs; however York will realistically start to get hungry, losing stamina and needing a shower to avoid stench and scare the panic-stricken inhabitants. Problems that can be easily solved, but which are not facilitated by the woodiness of the gameplay and the very long loading screens. 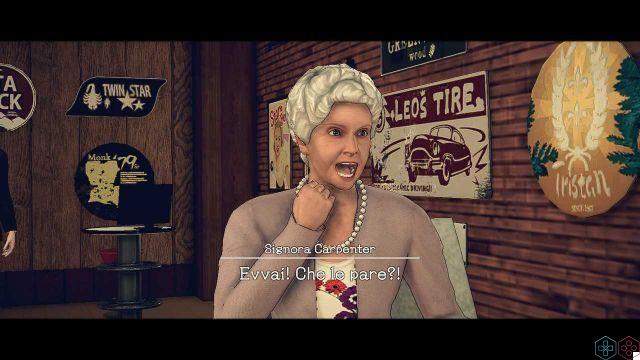 More and Less - Deadly Premonition 2 Review: A Blessing in Disguise

Furthermore, while we explore the streets of La Carré, York will very often talk to himself, the problem is that he does so in such a repetitive and automatic way as to be exhausting, undermining even more the pleasure of traveling. However, there are two ways to speed them up: enhancing the skate and taking advantage of the quick trips by taxi. The first is by putting together special talismans from the voodoo merchandise seller, through which we can also improve various stats of our agent such as damage and life.

Statistics that become useful whenever York has to face an omen of death, that is the survival horror sections. As in the past, we will find ourselves in long corridors in which we will have the task of breaking down each otherworldly enemy that we will face. However, this sequel has undergone a major reduction in fun given the almost total absence of secondary weapons, other than the rubber shotgun.

In addition, the variety and design of the enemies leaves a lot to be desired. Compared to the first game some have been added minigames, including bowling, stone throwing and a skating obstacle course, which will help us get some tricks.

The latter are pleasant enough to exploit, but too woody in use to be almost useless. Although problematic, the general gameplay is still quite "helpful" and in the canons of the series. In fact, the game and the author are often perfectly aware of the problems or frustrations caused to the player, breaking the fourth wall in a nice and intelligent way. Even York expresses his disappointment in front of these fetch quests. It almost becomes a challenge together with York from fight against the author. But it is when we combine all this with technical problems, that the level of frustration reaches stellar levels. 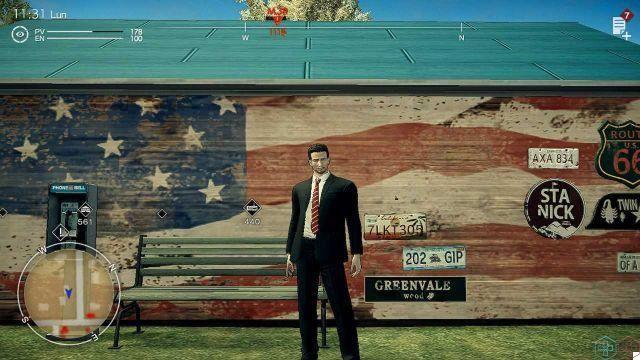 The mystery deepens, as do the problems - Review Deadly Premonition 2: A Blessing in Disguise

In review, Deadly Premonition 2: A Blessing in Disguise was a real disaster on a technical level. The stability of the game is so weak that we have probably experienced it all kinds of bugs possible: we fell in the textures, several crashes, freezes, the commands stopped responding and much more. Also to be added are decidedly subdued performances in the open world both in dock and portable mode.

The only sanctuary of peace are the interiors which, in addition to having the most convincing design, are among the only locations that offer excellent performance. Also of note are the biblical uploads. All problems that are surprising if we think that the visual distance is even less than the first Deadly Premonition. However, Swery has publicly promised to wrestle with the producer to fix some of these problems.

From a purely aesthetic and design point of view, the work done with the sequel represents, for the most part, an improvement. Now there is a much more marked comic style thanks to the adoption of cell shading e the models of the characters are of pleasant workmanship. Furthermore, the buildings are no longer the result of a brazen copy paste, but sufficiently diversified, the problem lies entirely in the sadness that surrounds them. 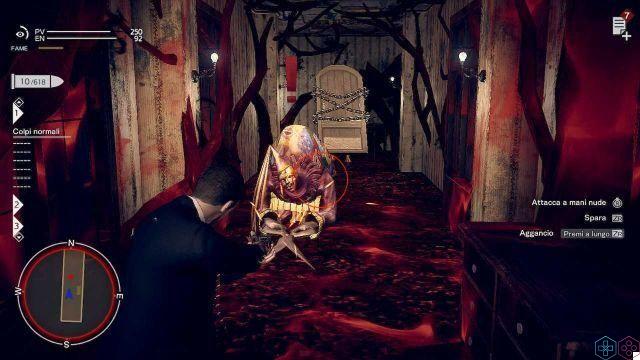 It is difficult to evaluate a title like this technically wrecked in which, however, the hand of a passionate author is evident. The game indeed offers one very interesting plot which we are sure will appeal to lovers of the first game. The places and dialogues are rich in details, which offer numerous food for thought and illuminate the player with apparently useless notions. York with its logical and out of place statements lead the story with pleasure, always maintaining a high level of interest in the mystery that lies behind La Carré.

The gameplay is a discordant note, with some steps forward and others decidedly backwards, a part that also most of all suffers from disastrous technical execution on the whole title rests. To pull back the vote is the price of € 49,99, too high for the current state of things.

The game of today's review Deadly Premonition 2: A Blessing in Disguise, was developed by TOYBOX Inc. and published by Rising Star Games, is now available exclusively on Nintendo Switch. To stay up to date on video games and technology, we recommend that you continue to follow us on the pages of techigames.

6.5 Lovable with a little patience

add a comment of Review Deadly Premonition 2: A Blessing in Disguise, do we have a new cult?