Before starting the review of Crash Bandicoot 4: It's About Time let's try to contextualize everything in time. The title is set after the end of Crash Bandicoot 3: Warped and begins with the escape of the Dr. Neo Cortex and N. Tropy from their dimensional prison. Due to this sudden escape numerous space-time gaps will begin to open up around the world and the two mad scientists they will try to exploit them to dominate the universe. Luckily Crash and his friends will not sit idle, but will immediately start looking for a way to stop the bad guys.

The plot has never been the most important aspect of the Crash games and even that of this fourth chapter does not shine for originality, but overall it is really very nice. The story is quite trivial, but it is made more interesting and fun thanks to the possibility of find out how the various characters helped Crash and Coco in their adventure playing alternate levels. Furthermore, it is thanks to the characters that Crash 4 manages to engage the players, since their interactions always result in very funny curtains. The humor of the game also manages to appeal to multiple audiences, entertaining both children and adults with jokes that work on multiple levels. 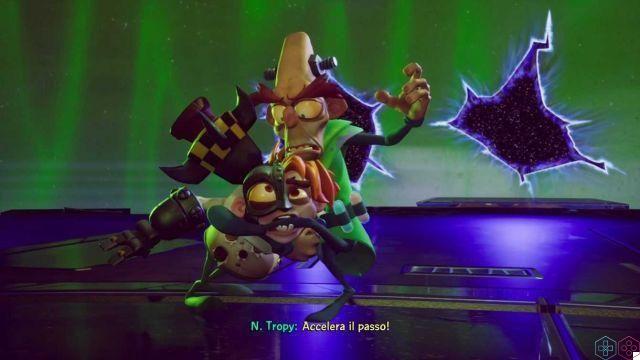 Crash 4 is based on the classic formula of the first titles in the series, but updates thanks to a large number of novelties. Your goal will always be to get to the end of a level alive by destroying as many crates as possible and every now and then face some successful bosses, but to do so you will have different techniques.

In addition to the classic jumps, pirouettes and bellies, in this title Crash will also be able to perform double jumps, crouch and even slide. In addition, of course, you can also count on the help of the new ones quantum masks: Lani-Lolli, Akano, Kupuna-Wa e Ika-Ika. Lani-Lolli is able to make certain elements of the levels appear or disappear, Akano will allow you to rotate strongly and hover in the air, Kupuna-Wa manages to slow down time and finally Ika-Ika can reverse the center of gravity allowing Crash to walk across the ceiling.

All of these new powers and abilities combine perfectly, allowing Crash to perform techniques never seen before make the game action always varied and frenetic. In addition, to increase even more the variety of the title are added the various extra characters. In fact, during your adventure you will not only use Crash and Coco, but in some specific levels you will also take on the role of Tawna Bandicoot, Dingodile and Dr. Neo Cortex. These characters have a very different style of play and skills from those of the protagonists, and sometimes using them you will almost feel like you are playing another game.

Completist Heaven and Hell - Crash Bandicoot 4 Review: It's About Time

Compared to the old chapters, Crash 4 is by far the one with the most content. In the game they are really present lots of levels which differ greatly in both setting and structure. Furthermore, the amount of content increases dramatically if we take into consideration all the activities dedicated to one of the main targets of the game, that is the completists..

At the end of each level of the game you will be able to get some gems picking up a lot of Wumpa fruit, smashing all the crates and eventually dying less than three times, but that's just the tip of the iceberg. In fact, all levels can be replayed in N. Vertita mode, that is, a mode in which you will have to go through an inverted version of the area with the addition of some modifiers, and here too you will have to collect gems. In addition, you can also get other collectibles by completing puzzle levels, timed challenges, searching for secrets, unlocking skins and so on. In short, overall the game offers a lot of content but, given its difficulty, for some players it could prove to be a double-edged sword.

Crash Bandicoot 4 is a title that in the more advanced stages it becomes very demanding, but offers mechanics to help players in need. For example, after a long series of deaths you can get the maschera at I-Me, becoming immune to the first damage suffered, or it may spawn a new intermediate checkpoint to facilitate advancement.

The problem is that these aids are completely useless when you try to get all the gems, since you will have to be perfect. The only way to complete the game 100% then is to keep trying the levels again until you have mastered them perfectly. This great challenge certainly brings a lot of satisfaction but for many players it could be really frustrating, as you may end up spending hours on the same level all the time. 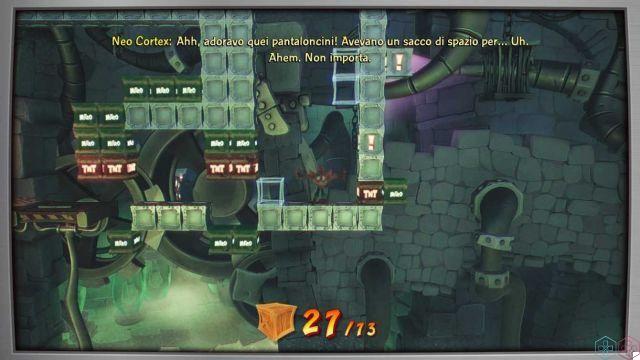 Artistic and Technical Quality - Crash Bandicoot 4 Review: It's About Time

We continue our review talking about the artistic and technical quality that distinguishes this Crash Bandicoot 4: It's About Time. The game really reaches very high peaks. From technical side the title offers an exceptional graphic rendering, a stable framerate and very accurate animations. Plus the game boasts high accuracy regarding Crash movements and collisions with obstacles, minimizing unfair defeats. The only drawback is represented by quite long loading times (at least on the standard PS4 where the test took place).

As regards the artistic side instead the game really achieves some incredible peaks. All levels are very different from each other and boast an obsessive attention to the setting, the details, the design of the enemies and the soundtrack. Also, thanks to the N. Vertita mode, the development team managed to re-propose all the levels of the game with a truly sublime alternative style. For example, a futuristic metropolis is transformed into a submerged city, or a prehistoric world is recreated as if it were a wax drawing. These new styles also in some cases they also affect gameplay, changing the movement abilities of Crash and his companions. 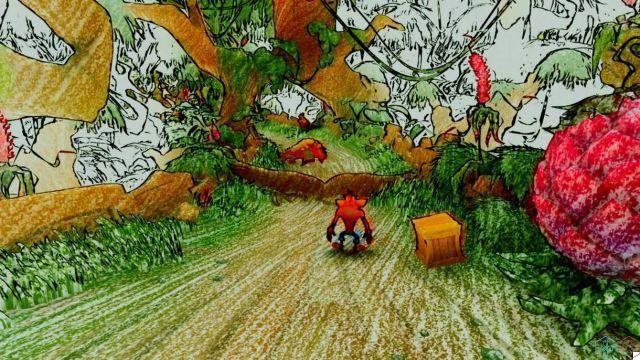 Crash Bandicoot 4: It's About Time, as can be seen in our review, is an exceptional platformer which is positioned by right as best chapter of the series. The levels really are numerous and difficult but, thanks to the new abilities and variety offered by secondary characters, completing them will always be fun. Also, given the huge amount of collectibles, this title boasts an incredible longevity, also supported thanks to fun and nostalgic local multiplayer modes. Sure complete everything 100% it could be frustrating, but true fans of the genre will surely have no problem completing even the toughest challenges.

Crash Bandicoot 4: It’s About Time è available now for PS4 and Xbox One. If you are interested in staying up to date with all the news on the world of video games and much more, then keep following us here on techigames.