Review Couleurs de Paris: the Board Game for artists

Have you always wanted to play Degas, Monet or Van Gogh? Now you can, thanks to the Couleurs de Paris Board Game that we will see in this review. Organize your art studio, train your assistants and paint your masterpiece. But be quick, because your competitors may have already outpaced you!

Colors of Paris is the new board game from Super Meeple which will transport you to the art workshops of the Parisian master painters of 1931. Born from an idea by Nicolas De Oliveira and with illustrations by Fabrice Weiss, the game pits players in a battle to the last color, challenging them to create their two masterpieces before their opponents. Just arrived in Spain thanks to Gate On Games, we tried it for you in preview for this one review. 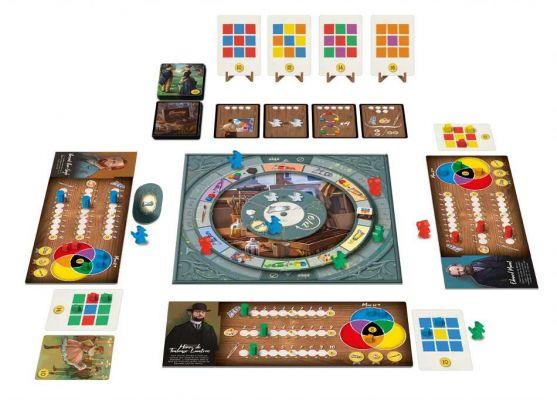 A game to the last color | Couleurs de Paris review

Colors of Paris is a management game based on the world of painting and art. Each player in fact plays the role of a famous painter of the '900, in a challenge against opponents to paint their own masterpieces. Choose your favorite painter and play him as he runs his workshop and assistants. Buy new dyes, mix colors and paint your artwork. But be careful, your opponents will do the same and will try in every way to slow you down.

After arranging the game board, distributing the shops and opening the color cubes, randomly choose a starting player, who will be the first to decide how to arrange his assistants. You start with three assistants each, who can be placed in the action wheel each turn to advance your strategy. The player who gets the most points by painting, improving his skills and acquiring special colors for his shop wins. 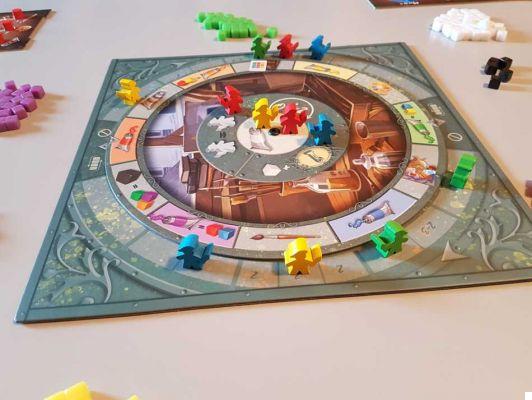 Each turn, all players starting with the first place an assistant on the wheel, choosing their first action. It continues until all the assistants are positioned, then the actions are resolved in order. The color cubes are acquired from the supply, the primary colors are mixed or the draft of a future table is prepared, which can be colored in the following actions. When finished, the dashboard rotates and one assistant each can stay on it to reserve action for the next lap. You can thus plan future rounds and hinder those of your opponents.

In the beginning, you can only increase your mastery and acquire the primary colors by placing your assistants in the corresponding boxes. In the following rounds, however, you will be able to mix the colors you already have to obtain the secondary colors, in order to complete your paintings and obtain the corresponding points. Attention: Coulers de Paris is a game that rewards strategy and planning, that is the ability to balance the actions of advancement and improvement of your shop. Choose your actions carefully and pay attention to those of your opponents, or you risk ending up with a few points and thus giving you the victory.

The game ends when one of the players completes his second artwork, but it's not enough to be quick: it will be the points obtained during the game that really reward, so you will have to juggle every action well to be victorious at the end of the game.

The Varianti | Review Colors of Paris

The game allows for variations, to increase the difficulty and versatility. In Coulers de Paris you can in fact choose a painter, who has specific skills useful during the game. Van Gogh or Monet, Degas or Toulouse-Lautrec, the greatest Parisian masters of the 900th century are all available and their skills are created on the basis of their art. With Van Gogh you will have more choice in the use of colors, with Toulouse-Lautrec you will be able to acquire blue more quickly than your opponents. You can distribute the painters randomly among the players or give them a choice to make the game even more interesting.

Additionally, bonus cards and special abilities are available to enrich the gaming experience and challenge. 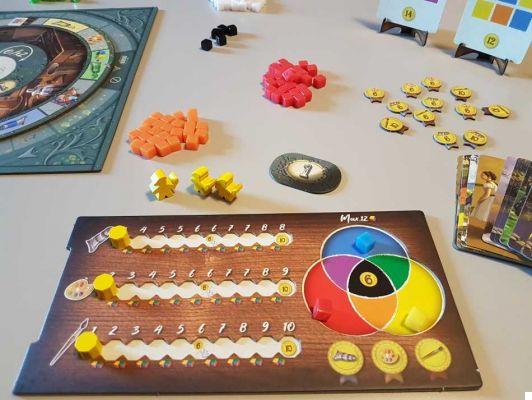 Our impressions of the game | Couleurs de Paris review

Original and well thought out, Couleurs de Paris proves to all intents and purposes a little gem of Board Games. Careful in the choice of materials and design, the game offers over an hour of entertainment and tests the planning skills and timing of its players without running the risk of ruining the gameplay with overly complex mechanics.

The numerous actions that can be performed each turn offer a rich and versatile range of game choices. Improving the skills of your shop, mixing colors and painting works of art are all possibilities that change the current game. Coulers de Paris is therefore a highly replayable game, pleasant both in four players and in two, in a duel between opposing shops.

The rules manual is also light and intuitive and the game does not require a long preparation before starting to play. The possibility of introducing bonus cards and game variations makes the challenge even more attractive and increases the replayability of the title.

In summary, Coulers de Paris is a game suitable for all players, perfect for an evening of fun with family or friends. It is recommended for players aged 10 and over and offers the best experience in four-player games.

9 A little gem for art lovers

Cranium Review: The colorful and fun board game ❯

add a comment of Review Couleurs de Paris: the Board Game for artists